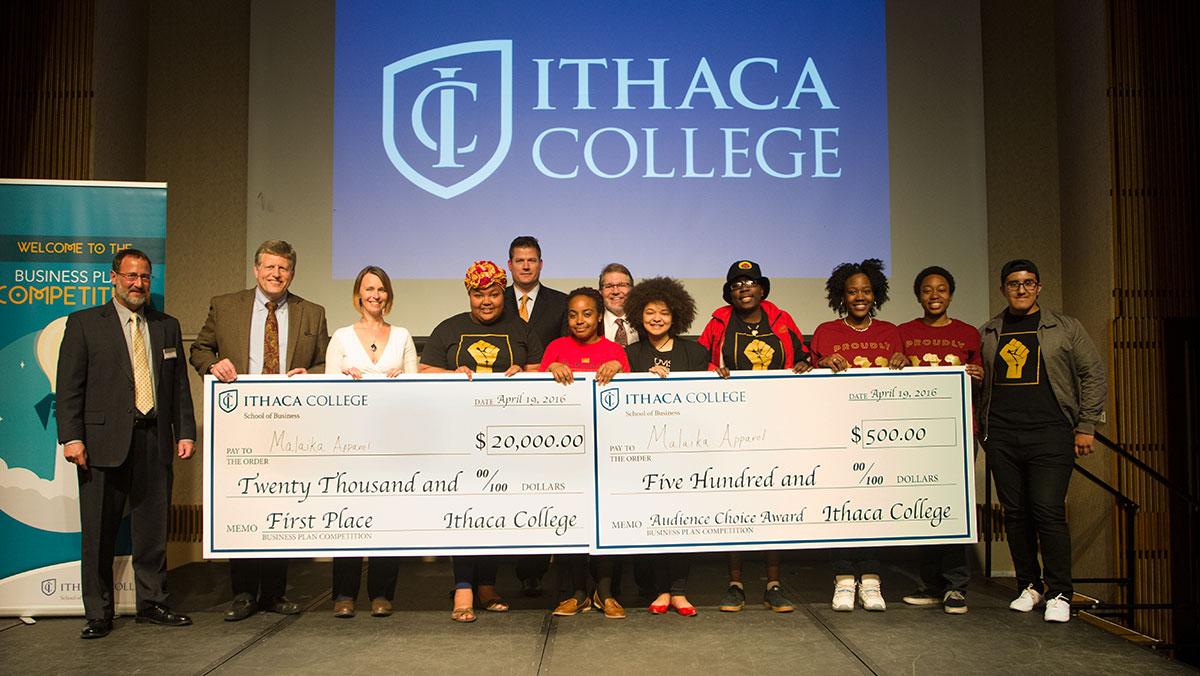 Malaika Apparel Co., a business created by Ithaca College senior Rita Bunatal, won the grand prize of $20,000 and the Audience Choice award of $500 at the third annual Business Plan Competition.

Malaika Apparel is a brand that is self-described as being dedicated to the empowerment of people of color through apparel. The second-place winner, which took home a prize of $10,000, was FilmUp, a networking platform for institutions, students and professional filmmakers. Taking third place with a prize of $5,000 was Sunshine Technology, an electrical audio signal modulating device for guitarists.

The Business Plan Competition took place April 19 in Emerson Suites, attracting approximately 50 attendees. The competition began as the Business Idea Competition in 2011 and has since encouraged students to expand upon their ideas and pursue the ideas on a more substantial level. The competition is funded by J. Christopher Burch ’76, CEO of Burch Creative Capital and co-founder of the Tory Burch women’s fashion label. Burch came under fire after referring to Tatiana Sy ’09 as “the savage” at the Blue Sky Reimagining Kick-Off event in October 2015.

Bunatal, who began the project of Malaika Apparel Co. about a year ago, said the brand’s success can be attributed to the strong sense of community by which it is surrounded.

“This time, we were a lot more confident, and we were able to see our community, the Malaika Apparel community, come out and support,” she said. “We are a big family. It was an amazing experience for us to be here and taking it in all together.”

FilmUp CEO Aryeh Hoppenstein, a senior, said the Business Plan Competition was a one-of-a-kind experience and that he is looking forward to furthering his project with his winnings. He said developing the website, creating a beta platform and starting customer trials are the next steps in the project.

“The ultimate reward is being able to continue to work on this project, not to put money in our own pockets,” Hoppenstein said. “Seeing our concepts build and come to life before our eyes has been incredible.”

Third-place winner senior Brandon Esteves, CEO of Sunshine Technology, said the winnings will be saved so he can eventually work on manufacturing and marketing the product.

Jerry Dietz, owner of C.S.P. Management; Ariana Blossom, director of Passenger to Pilot; and Robert Ellis, director of First State Trust Company and assistant professor of finance and international business, judged the event. Dietz said judging for the Business Plan Competition focused more on the stability of the future plan of the business than the idea for the business itself.

Dietz also said he hopes students gained valuable skills from the competition, regardless of placement.

“Having that experience of getting up and presenting your idea, standing up in front of a group of people in a timed situation — which makes it even more difficult, to be able to present and express and convey your messages — is invaluable,” Dietz said.

The competition was organized by Brad Treat, instructor in the Department of Management. Treat said that it is up to the companies to choose which path they take after the competition. Some of the companies launch their businesses under Rev: Ithaca Startup Works, which has worked with several previous winners of the competition, he said. Rev is a company that “helps Ithaca entrepreneurs grow their businesses to the fullest potential,” according to the company’s website. Rev provides office space and other resources to help budding business.

The winnings of the competition will allow Malaika Apparel to make several expansions to the company, such as the addition of a children’s line of clothing. However, Bunatal said she is most excited to use the money to be able to work more closely with members of the community who are separated by distance.

“I do live in Ghana, and to go back and have partnerships and work side by side, not above or below, and to have more of a stronger and sustainable partnership, I think is one of the most important things to me,” she said.

“Even if we walked out of the competition with only $500, we would have been satisfied because we knew Malaika already won,” Bryan said. “We know we believe in Malaika, we know people believe in Malaika, and we know that community is stronger than anything we can face. I think that’s why we got where we are.”