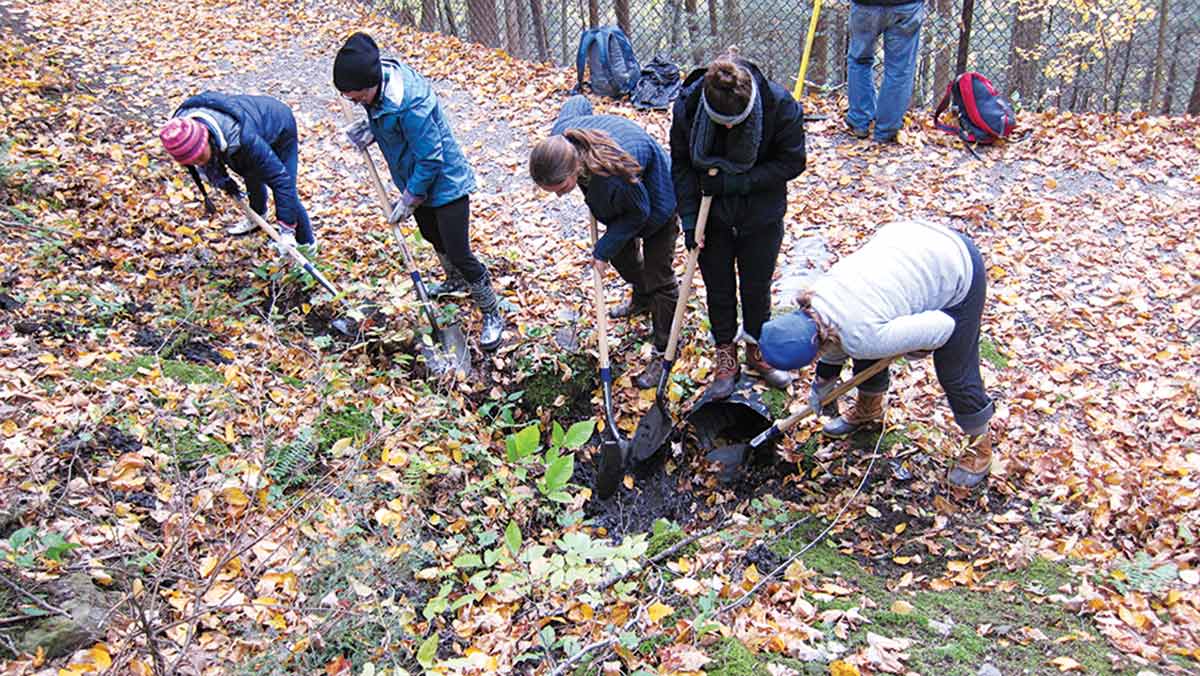 Ithaca College students were able to aid their communities and explore natural areas in the Finger Lakes Region over fall break through the Alternative Fall Break program.

Four students traveled to the Rescue Mission in Syracuse, New York, and five to the Finger Lakes parks from Oct. 15 to 18 for the trips, which were organized and hosted by the Office of Student Engagement and Multicultural Affairs.

At the Rescue Mission, students volunteered at the Food Services Center, sorted clothing and worked in the mailroom, sophomore participant Madeline Wakenight said. Although she said she would have enjoyed interacting more with the homeless families, she was happy to volunteer her time to the Rescue Mission.

Wakenight said she was looking for a different perspective. She said she chose the Syracuse trip because she wanted to step outside of her comfort zone and discover a new world.

“I thought it would be good to kind of expose myself to different types of people,” she said. “I feel like Ithaca can be kind of a bubble. It was really interesting to eat in the cafeteria with everyone else, and you just got to have the same experience that these families have. It was just a very different environment to be in.”

The Finger Lakes trip gave students the chance to help the local environment through three main projects, said Don Austin, assistant director for community service and leadership development at OSEMA. First, the students collected white and green ash tree seeds in the Taughannock Falls State Park in Trumansburg and Fillmore Glen State Park in Moravia, New York, in an  attempt to save the species from destruction by the emerald ash borer species. The seeds will be placed in a seed bank, so in the future after the emerald ash borer has moved on, the trees can be replanted.

Lastly, he said they cleaned out culverts at the Robert Treman State Park, which are underground drains that direct hillside runoff away from the trails, keeping them clean and safe for hikers.

Austin, who organized both trips this year, said he tries to find trips that are local and offer a variety of activities for students, which he believes was successful this fall break. He said four out of five of the students who attended the Finger Lakes trip had never been to the parks before.

“We had a great experience learning more about what they try to do to maintain parks,” he said. “I don’t want to say I’m going for a ‘wow factor,’ but I also want them to enjoy the area.”

Freshman Robin Reiterman Curtis said she attended the Finger Lakes trip because she couldn’t go home for fall break since she lives in California. She said she chose to go on the trip because of her passion for nature, and she had never seen East Coast nature.

“We could really appreciate where we were volunteering and what we were doing,” she said. “The first day we got there, we all went down to the lake and just looked across and took in the view, and it was absolutely gorgeous.”

Austin is currently planning two new trips for this upcoming summer. One will travel to Boulder Creek, California, to work with the YMCA’s environmental education program, Camp Campbell. Another will travel to Milwaukee, Wisconsin, to focus on poverty alleviation, Austin said.

“I’m hoping students respond and hoping students look at these trips and say, ‘Yeah, this looks like a great opportunity for me to learn something new or to expand on knowledge that I’ve learned in the classroom,’” he said. “Or just be able to meet new people and be able to do some volunteer work.”