Ithaca College students use marijuana, drink alcohol, feel stressed and have sex more than the national average, according to survey results from the National College Health Assessment survey.

The college’s Center for Health Promotion released the 2015 survey results Sept. 13, and the national reference data from the American College Health Association was released this month, revealing the college places above the national average in a number of categories.

The survey was emailed to 3,062 students between February and March. Of the students who received the email, 718 completed the survey.

Seventy-six percent of students at the college said they consumed alcohol in the past month, while the national average was 64.8 percent.

In addition, 34.7 percent of the college’s students said they used marijuana in the past month, while the national average was 16.9 percent.

Nancy Reynolds, health promotion center program director, said the trends may be explained by the stress levels revealed in the survey. 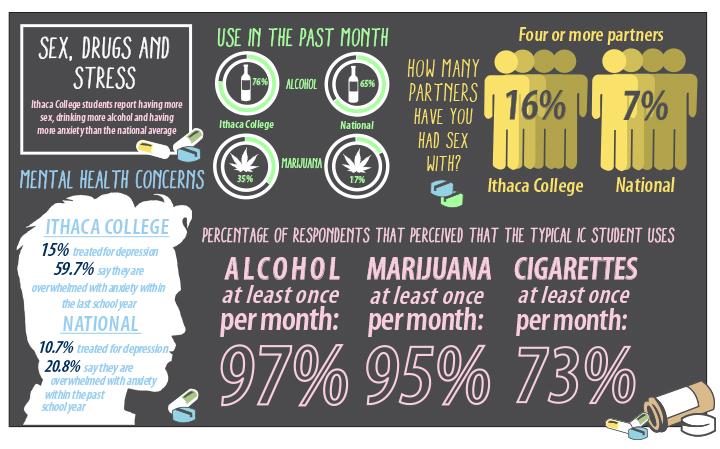 Reynolds said it’s common for students to relieve stress by using substances, such as alcohol or marijuana.

These results have exceeded the national average since the Center for Health Promotion began conducting the survey in 2003, Reynolds said. While she cannot explain why the results are so high, she said she is trying to reduce them for the future.

“Any change toward improved health is really what we’re after,” Reynolds said. “I don’t think anyone’s decided that our students should be entirely substance free, that’s really not the realistic goal, but we’re definitely on board for reducing harm that substances cause in a student’s life.”

Reynolds said she is attempting to do this by implementing programs to improve the health of the college’s students. One of the most influential programs in place is the Balancing Alcohol and Substance Use to Improve College Success program, she said. BASICS is a program used by many universities in the U.S. to focus on prevention, identification and early intervention.

Reynolds said she and the health promotion team on campus can use these survey results to benefit the students on campus. Reynolds can present the results to the Ithaca College Board of Trustees and other stakeholders in order to receive more resources for the specific health needs of the students.

“We need to be able to find resources that are going to help us address the high demand that we have for our services,” Reynolds said. “Knowing that our substance rates are higher, we should have a credentialed substance abuse counselor on staff. Currently, if you need that service, you need to go off campus to find that.”

Students have differing opinions about the levels of both substance use and stress on campus. Some, like freshman McKenna Pols, believe substance abuse is not any more of an issue than it would be at the next college.

“It’s typical of a college campus,” she said. “I’d say stress levels would be a little bit lower than average. It seems like everyone kind of knows how to handle their stress and have fun, but also learn.”

After learning about the survey results, Pols said she was not confident in the college’s ability to change them, attributing the problem to influences students experienced prior to attending the college.

Reynolds said the results from the AlcoholEdu survey, completed by incoming freshmen, indicate that many students come to the college already using substances.

Junior Dylan Radigan also said high stress levels may be caused by outside influences that the college can’t control. He said while the school is making a strong effort to address the problem, it may just be “the nature of Ithaca.”

“I wouldn’t think stress level,” he said. “I could see it because of the weather conditions and the winter depressions people go through. I know some people who use substances as a result of stress. I consider them outliers and not a huge part of the general population.”

Reynolds said although the results have been consistently above the national average, alcohol and cigarette use has decreased over the past 10 years by 6 and 8 percent, respectively. Marijuana use, however, has increased by almost 8 percent.

The decrease in alcohol and cigarette use, however, along with the increase in condom use after providing free condoms, proves that the college’s methods are working, Reynolds said.

“The substance abuse issue is one that’s kind of risen to the top of our radar because of our NCHA data,” she said. “It’s really allowed us to understand that this is a really significant health concern at IC. We’re certainly not the only ones.”