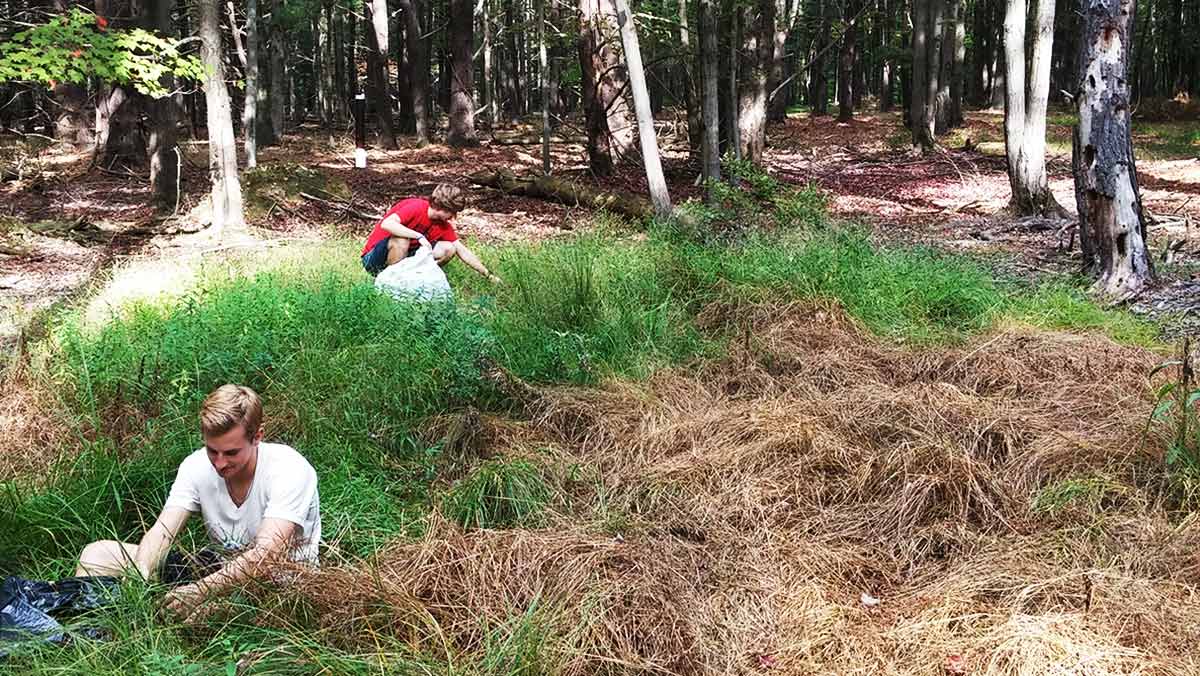 Students and faculty managing the Ithaca College Natural Lands are in the process of removing what they hope is the last of an invasive species of plant known as Japanese stiltgrass after six years of sustained eradication efforts. On Sept. 26, the group cleared out a majority of the remaining stiltgrass.

The college owns 560 acres of land that are separated into four reserve parcels, each managed by different people. This land hosts many different programs, such as recreation trail maintenance, ecological research, volunteer stewardship and environmental education. Classes, such as Environmental Sentinels and South Hill Forest Products, use the ICNL as an outdoor classroom every year. Three hundred and sixty-five of those acres make up the South Hill Natural Area East, which borders the south end of campus by Towers and Terraces, and has been most heavily impacted by the stiltgrass.

How the invasive grass got into the infected area, though, is a mystery, Jake Brenner, assistant professor of the Department of Environmental Studies and Sciences, said.

There are many cyclical effects stiltgrass has on the Natural Lands ecosystem, which is why it has been a priority for ICNL members for the past five years, Brenner said.

“Stiltgrass outcompetes native plants and interferes with wildlife behavior,” Brenner said. “One example is that it tends to boost rodent populations because it makes a thick uniform carpet of grass through which predatory raptors can’t see.”

The majority of the stiltgrass grows in Swamp White Oak Swamp, adjacent to the South Hill nature trail, which is a “Federal Mitigation Wetland,” Brenner said. According to an Environmental Protection Agency and Army Corps of Engineers joint policy, if a wetland is damaged or destroyed, then whoever damaged it is obligated, by law, to fix or create a wetland of equal or greater size in another location.

“We’re removing invasive plants from this wetland because we damaged some cattail marsh when the Circle Apartments were expanded a few years ago,” Brenner said.

Map data shows how far from eradication the grass is, but without the recent map data, which is still being processed and graphed, it is hard to see how close they are from total eradication. However, Brenner said he believes it is almost gone.

Japanese stiltgrass has a seven–year seed bank, which makes eradication more difficult. A seed bank is a natural storage of seeds within the soil of an ecosystem, which means, in the case of the stiltgrass, seeds dropped in 2011 might not sprout until 2018. Therefore, the shortest theoretical time the stiltgrass can be totally eliminated is in the next seven years, but with comprehensive eradication practices the seed bank’s numbers can be cut down.

Junior Victoria Chamberlin, an active ICNL member, was a student leader at the recent grass pull, which was attended by about a dozen students.

“By pulling the plants before they seed, we’re trying to prevent future seed banks from happening,” Chamberlin said.

Since the wetlands are protected, spraying herbicides is prohibited, so all of the removal has to be done by hand-pulling, Brenner said. There has been some spraying on stiltgrass that grew outside of the wetland, but the sprayed plants still have to be pulled to avoid residual seeds dropping. Spraying also kills most other plants, so it is only used in areas that are dominated by the invasive plant, Brenner said. Spraying was more commonplace in the preliminary years.

“The first year it just blanketed the forest, and now we’re down to only small patches,” Chamberlin said.