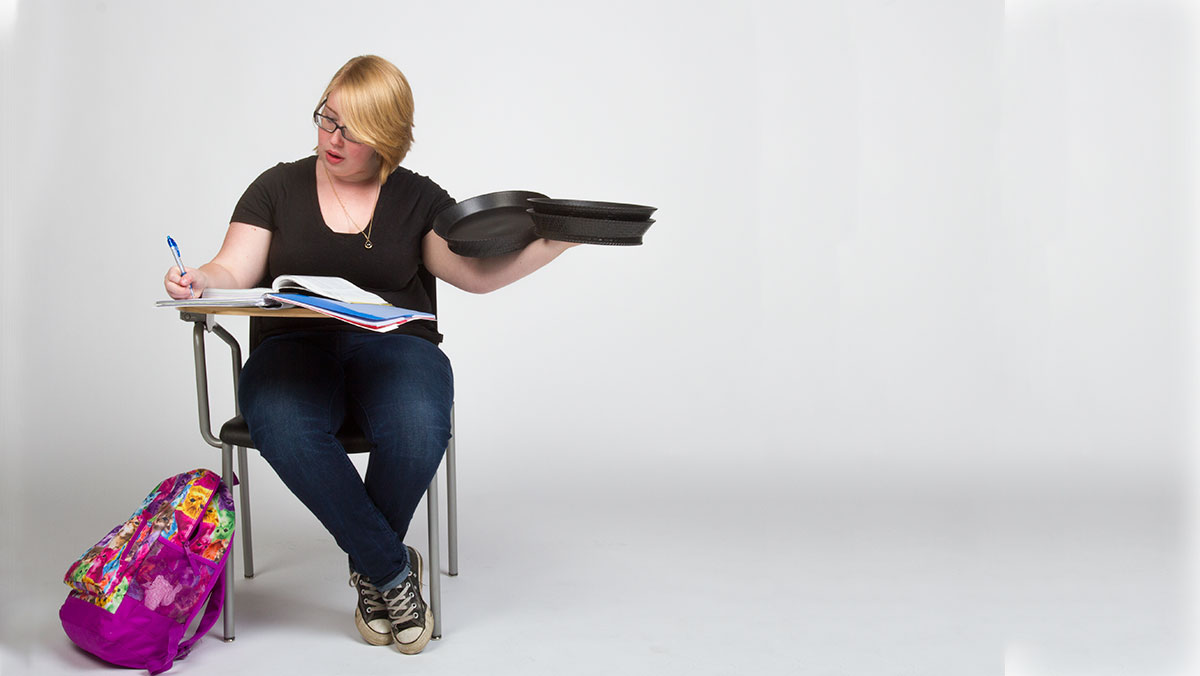 Amanda den Hartog/The Ithacan
Freshman Brooke Ent is one of a number of Ithaca College students who are paying for college on their own. Ent said she is planning on continuing her education in Germany, where higher education is tuition-free.
By Michael Tkaczevski — Senior Writer
Published: September 16, 2015

Sophomore Darby Carroll brings her experience working at an ice cream shop when she was 15 years old to her on-campus catering job, which she balances with a 16-credit course load.

At the ice cream shop, Carroll said she would find little breaks in between scooping ice cream to do her homework.

“Knowing how to get stuff done and focus on the next thing … is a great skill to learn before college,” Carroll said.

She has gotten good at cooking food in bulk and rationing it for a week or more. She has taught herself to listen to classical music to help her focus on her work. She even looks forward to returning home to Rome, New York, because her 50-hours-per-week job at a deli actually stresses her out less.

“They love me there. It’s a good feeling. I feel wanted,” Carroll said.

Home for Carroll changed multiple times after she endured two tragedies. Her mother died of cancer eight years ago, and her father passed away in a motorcycle accident three years after she had moved to North Carolina to live with him.

“That made me want to be more responsible because I had to grow up so quickly,” Carroll said.

Because both of Carroll’s parents are deceased, she was classified as an independent minor even after she began living with her grandparents in Rome. These two factors increased her financial aid package, she said, and she pays the entire cost of her college education.

She is one of a number of students at the college who are putting themselves through school without the help of  parents. The number of parents who said they are planning to pay for their children’s education has decreased from 81 percent to 75 percent between 2013 and 2015, according to a 2015 survey by Discover Student Loans

Carroll originally had her heart set on University at Albany, but she said she fell in love with Ithaca College. Siena College and Le Moyne College, which are private liberal arts colleges, offered Carroll financial aid packages that would have covered almost all expenses, unlike Ithaca College.

“The fact that it’s my dream school and I had that hesitation — I can’t imagine the number of kids in my situation who got accepted but can’t afford it because they didn’t get enough,” Carroll.

Carroll said she budgets her wages by devoting her summer earnings to paying for tuition, while keeping her on-campus earnings for spending money.

Despite her status and hard work, Carroll still had to take out a loan of about $21,000 to pay for tuition, which she pays off in monthly portions. If she had waited until graduation to begin paying her loan off, she said the interest would almost triple.

Carroll is among the majority of full-time college students who work during the academic year. The most recent College Board data found 72 percent of students worked in college, as of 2011.

Like Carroll, sophomore Liya Lachovizer is overcoming financial difficulties to attend her dream school. Lachovizer had to learn how to become self-sufficient when she was 11 after her parents got divorced. Because of it, her father lost much of his financial stability.

“There was at least a year or two in our life where there was nothing,” Lachovizer said. “There were multiple times … when my dad thought the house was going to be foreclosed.”

Her family’s financial troubles caused Lachovizer to value responsibility from a young age.

“Working was always to support myself because I knew my parents could not give me the money,” she said.

During her freshman year, she worked three jobs: preparing food for Grab & Go, serving breakfast at Hilton Garden Inn on The Commons and working at Family & Children’s Service of Ithaca downtown through a work–study program.

Eventually, she had to quit some of her jobs because her health and grades were deteriorating, she said.

“At the time, it was the worst I had ever gotten sick,” Lachovizer said. “I told my dad, ‘Honestly, I’m kind of glad this happened because I’m so worn out.’”

This year, Lachovizer is working as a clerical assistant in the college’s Office of Student Financial Services and through a work–study program, she said.

Lachovizer said it wasn’t until she and her father went to Student Financial Services to speak with someone in person that she received the help she needed.

“I was very fortunate because my dad is a very persistent person, and he’s pushed that into me,” Lachovizer said. “There needs to be more people [in Student Financial Services] that can actually do something for people who need the help.”

Lisa Hoskey, director of Student Financial Services, could not be reached for comment.

Lachovizer said she received about $38,000 in merit-based and need-based scholarships from the college, which was a smaller financial aid packages than other colleges and universities she was considering, such as Hofstra University.

Legally, Lachovizer is financially dependent, and said her parents occasionally send her money for necessities, but do not make any payments on her college expenses.

Over the summer between her freshman and sophomore year, Lachovizer said she stayed on campus because she needed to make up for lost time during the year by working off-campus jobs while she didn’t have to focus on schoolwork.

Ronald Trunzo, associate director of the Office of Residential Life, said the college decided to continue a policy it piloted last year that allowed students to stay in their room, no matter which residence hall they lived in, over breaks.

“That was at the request of students for more flexibility,” Trunzo said.

If freshman students cannot afford to live in a standard dormitory double room, living in a triple room or applying for a Garden Apartment are the only options they would have, Trunzo said.

Despite the challenges, illness and stress, Lachovizer believes she is proving herself to family and friends.

“Everyone told me I was making a mistake,” she said. “I do think college is worth it. I have something to say for myself.”

Another student, freshman Brooke Ent, has taken care of herself since before college, and like Lachovizer, is considering continuing her education abroad. Ent said she is planning on moving to Germany next year.

Ent’s father is a software engineer and her mother is a stay-at-home mom, but while Ent was in high school, they gradually had her pay for her own expenses, as per their style of parenting.

“It was sink or swim, and I swam,” Ent said with a laugh.

Ent has to pay for her own food and clothing, as well as paying for college on her own, but she still uses her parents’ health insurance plan. Because she is technically still dependent upon her parents, she received a smaller financial aid package than an independent minor would have.

Ent said she came to the college because it was the only school she found that offers a German Education major.

Ent received a large scholarship but still had to take out loans to pay for the remaining $40,000 tuition fee.

The most stressful part of the application process, Ent said, was trying to stay on schedule with financial aid and application paperwork.

“I talked to the financial aid services. They were actually very helpful once it came down to it, once I started harassing them about it,” Ent said. “I couldn’t meet deadlines, and I kept trying to tell them, ‘There’s no way I can [meet] tuition costs.’”

Ent explained she received one warning letter about the paperwork deadline, but it didn’t arrive until 15 days after the deadline had already passed. She said the college’s Student Financial Services office needs to improve how it communicates deadlines.

“[Communication] was delayed more than it should have been,” Ent said. “I think the whole college tuition process in general needs to be more individualized to people’s financial standing.”

German universities are tuition-free, even for U.S. citizens, which means Ent will be able to continue studying German Education at a much more sustainable cost, but she admitted she’s luckier than many other students who are paying their own way through college in the United States.

“There’s no way I could [stay at Ithaca College] past two years,” Ent said. “It’s just too much.”