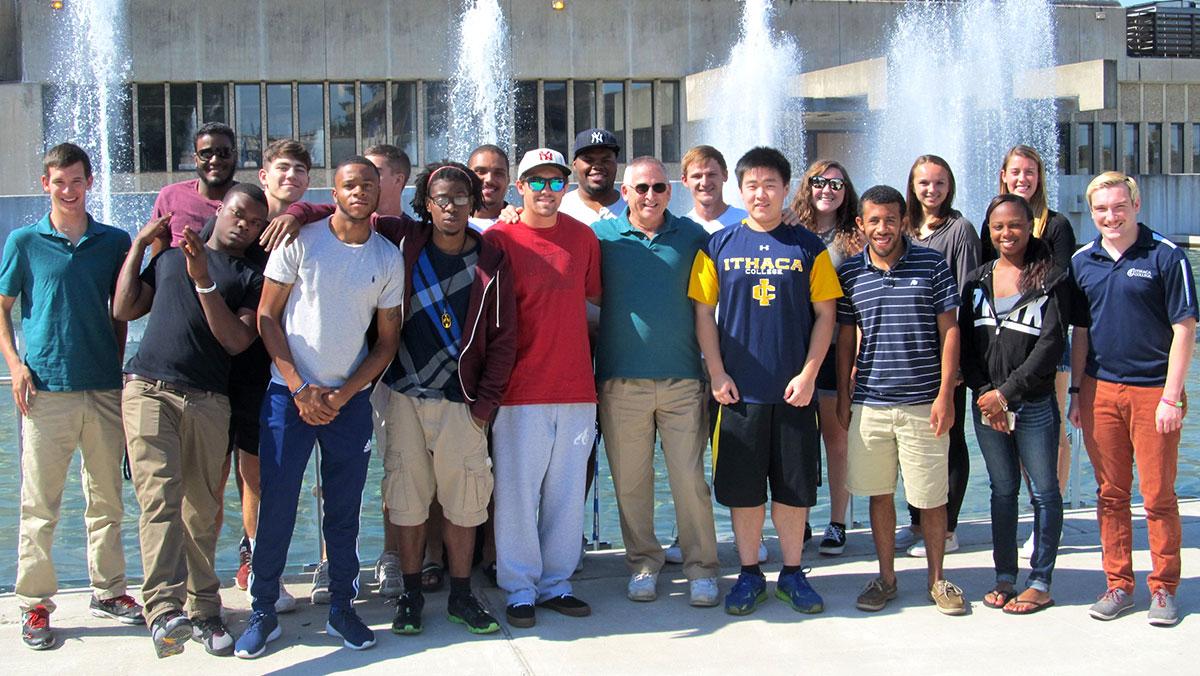 Courtesy of Stephen Mosher
The last students to complete the sport studies major, members of the classes of 2016–18, pose in front of the Dillingham Fountains in Fall 2015. The sport studies major is now only offered as a minor, and additionally Ithaca College faculty and administrators announced a proposal to split up the Department of Sport Management and Media April 29 during a town hall meeting.
By Danielle Allentuck — Sports Editor
Published: May 2, 2016

During a town hall meeting held April 29, Ithaca College faculty and administrators announced a proposal to split up the Department of Sport Management and Media in an attempt to better organize the programs and provide more opportunities for students. However, students have criticized the decision, saying they feel they were not included in the process.

To a small audience consisting of faculty and fewer than 10 students, Annemarie Farrell, associate professor in the Department of Sport Management and Media, and Kyle Woody, instructor and coordinator of the sport media program, announced the sport media and sport management majors — which are currently housed in the School of Health Sciences and Human Performance — would move to the Roy H. Park School of Communications and the School of Business, respectively.

The vote to relocate the sport media major is at the department level, and professors have until May 2 to cast their votes. The decision to move sport media is also pending approval from the deans of HSHP and the Park School.

Woody said he believes this move will be beneficial for the program in the future.

“I’m really excited to have that recognition and that Park brand because as we all know, it’s one of the finest communication schools in the country,” Woody said. “The sport media program lines up perfectly with Park, academically speaking, and the learning outlets housed in Park.”

The decision to move the sport management major is now at the provost level, as the faculty and deans already voted on and approved the move.

Farrell said this proposal will allow the sport management program to continue moving forward and keep up with the demands of the field in the future.

“We found that it was a pretty obvious overlap in terms of what they do in business and in terms of what we do in sport management,” Farrell said. “What made sense to us when we were talking is the value of having a business administration degree with sport management concentration. If I thought there were significant drawbacks, we wouldn’t do it.”

Both programs plan on having their respective proposals to the Ithaca College Board of Trustees this summer, and the changes, if passed, will be effective for the Fall 2016 semester, Farrell said.

Linda Petrosino, dean of HSHP, said the sport studies major, which the school decided in Fall 2014 to eliminate, will not be reinstated in the near future. This decision was made due to a record-low enrollment in the program but was met with backlash from students and alumni. The minor will continue to exist, but there has not been a decision reached yet about where the minor it will be housed.

“We don’t ever make such an important decision on one data point, so we look at multiple reasons,” Petrosino said. “We do constant program and curriculum review to make decisions. Admittedly, it was a really tough decision to make.”

Stephen Mosher, a professor of sport studies, along with many students, said he does not approve of the elimination of the sports studies major.

The sport studies program focuses on sports’ place in modern society. Mosher said without the program, he is worried students will not gain that knowledge.

“My biggest concern in this happening is that the identity that we have had for 30 years as a department, where issues of social justice are an issue in all our classes, will get lost,” Mosher said.

“The truth of the matter is that business school students with a concentration in sport management as well as sport media students can now minor in sport studies,” Breton said. “The minor is going to grow so much that there really needs to be another facility line added, and in that case, they really should just bring back the major.”

“We were not consulted whatsoever,” James said. “There was nothing really said about it. The most we knew was that the program was going up for review, but there was nothing specifically said to students to my knowledge until after the decision had already been made.”

Breton said the time slot, 3 p.m. on a Friday, was not a realistic time to collect sufficient student feedback.

“From speaking with some of my peers, there’s a little bit more disappointment and not so much satisfaction in terms of the reason for why they could not attend,” Breton said. “They thought a Friday at 3 was not the most ideal time slot in terms of getting as many students as possible. It’s a little empty in here.”