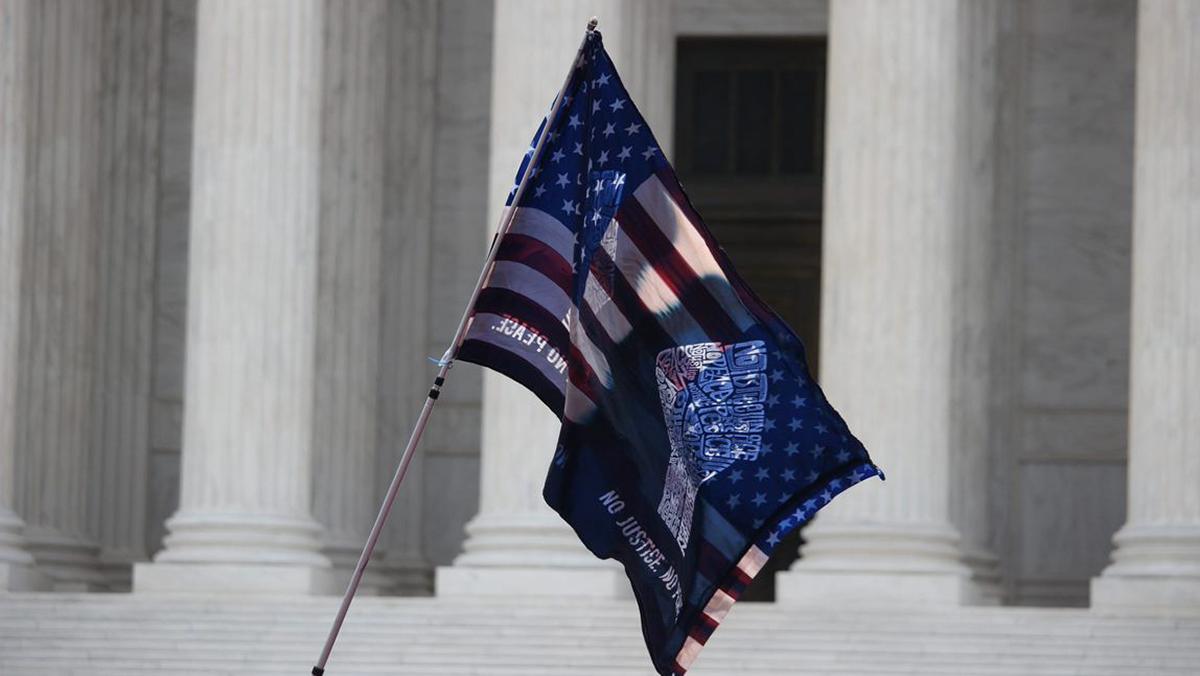 The Supreme Court of the United States ruled to overturn Roe v. Wade — a 1973 landmark ruling that protected citizen’s rights to an abortion — in a 5–4 decision June 24. 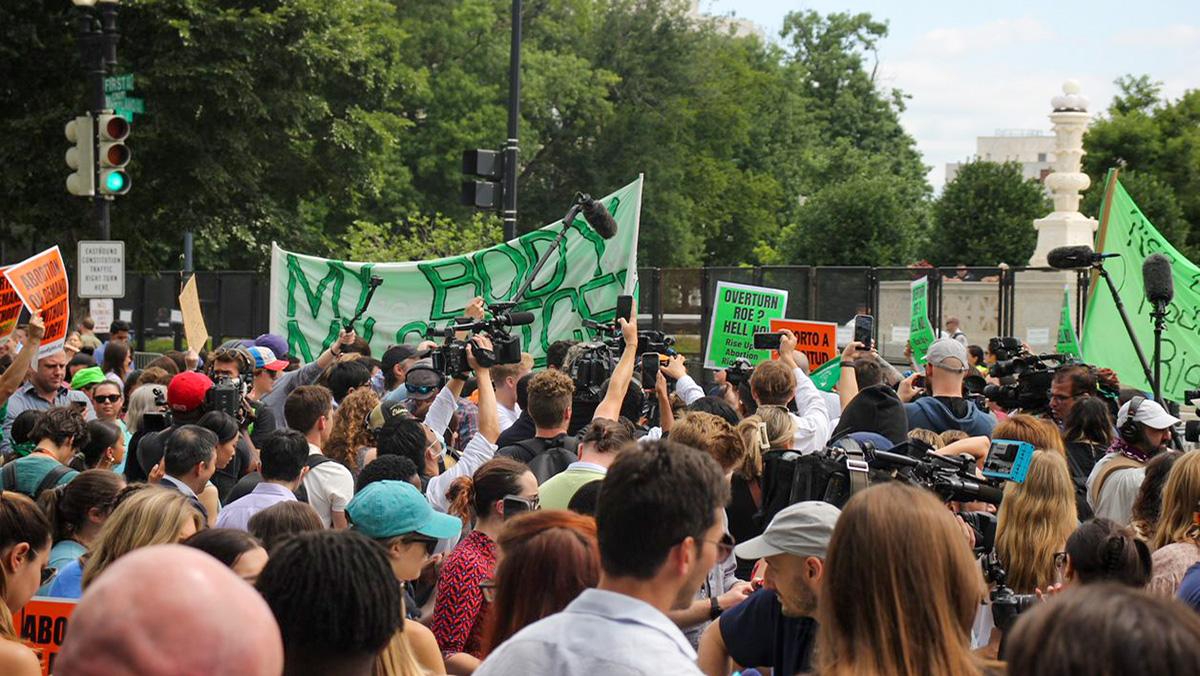 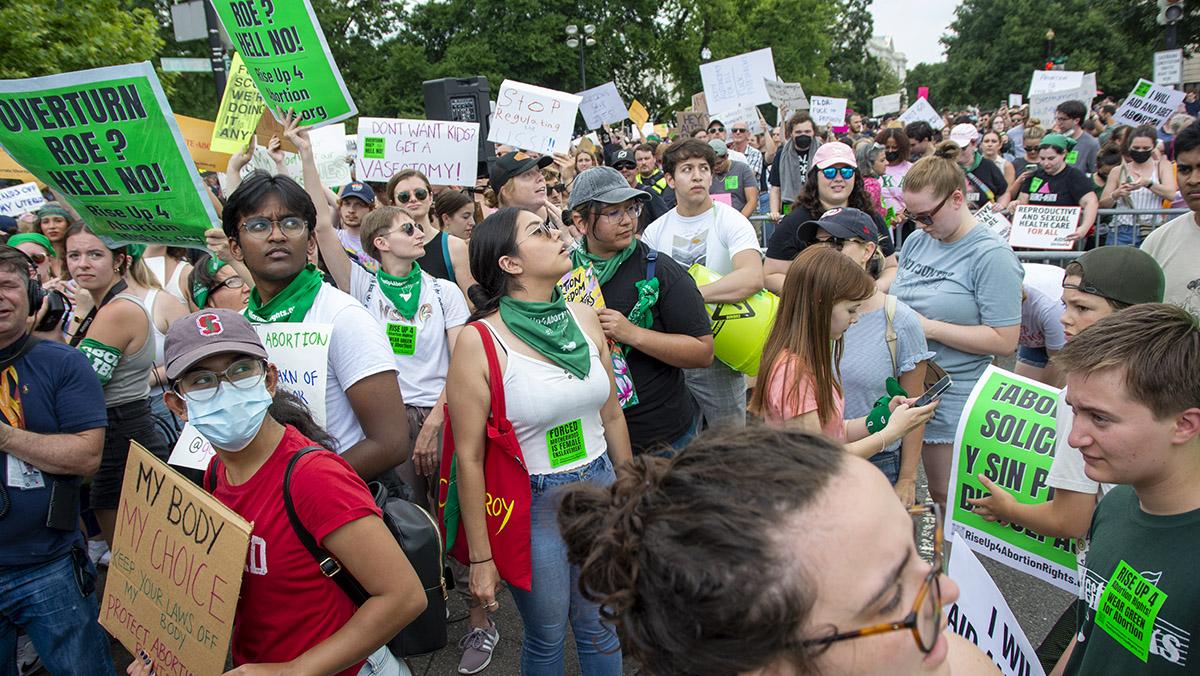 The crowd outside the Supreme Court turned to notice snipers that appeared on the roof of the building a few hours after Roe v. Wade was overturned June 24. Eleanor Kay/The Ithacan 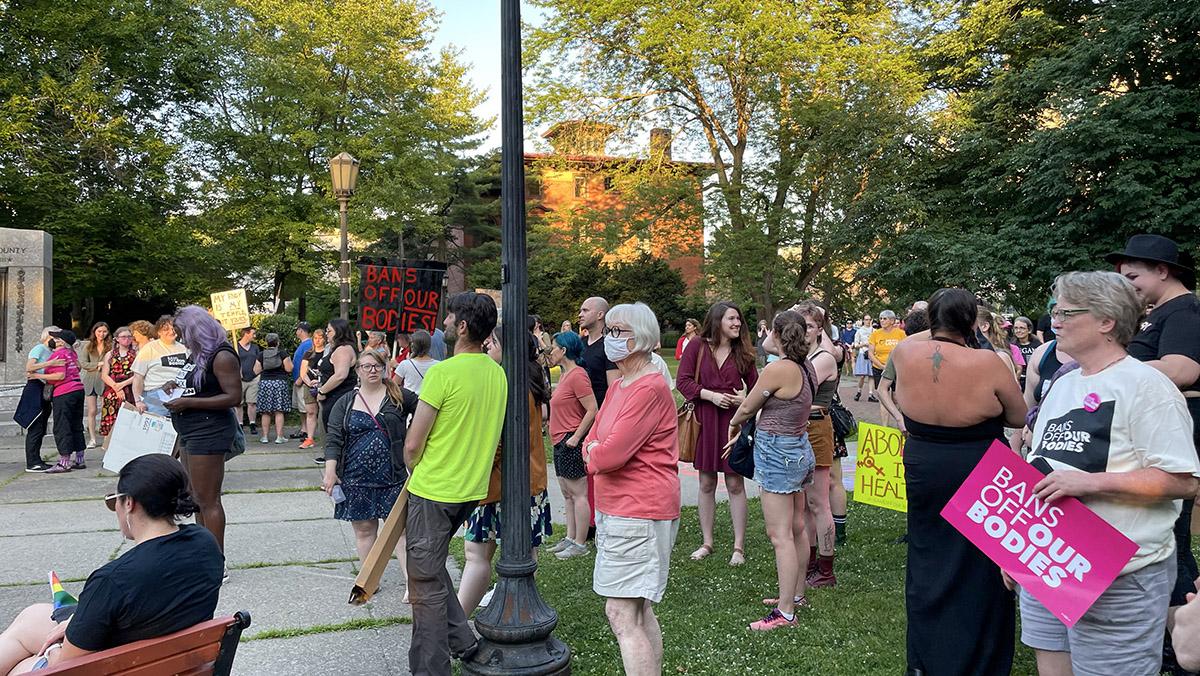 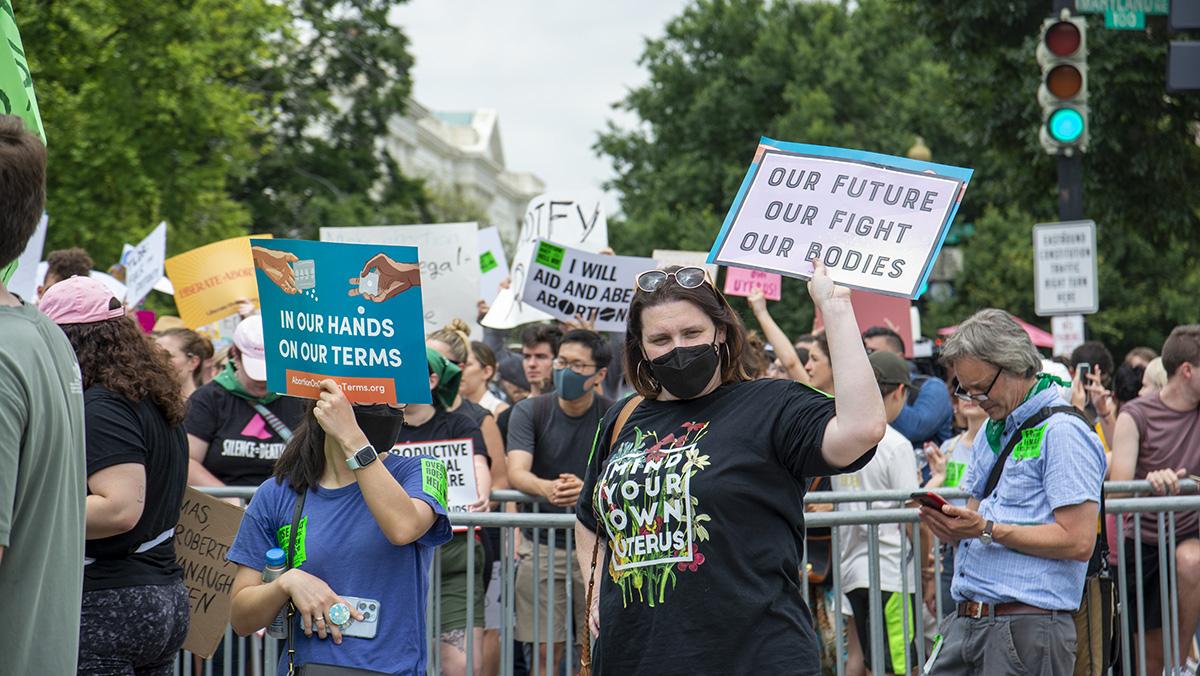 Protesters outside the Supreme Court on June 24. Eleanor Kay/The Ithacan 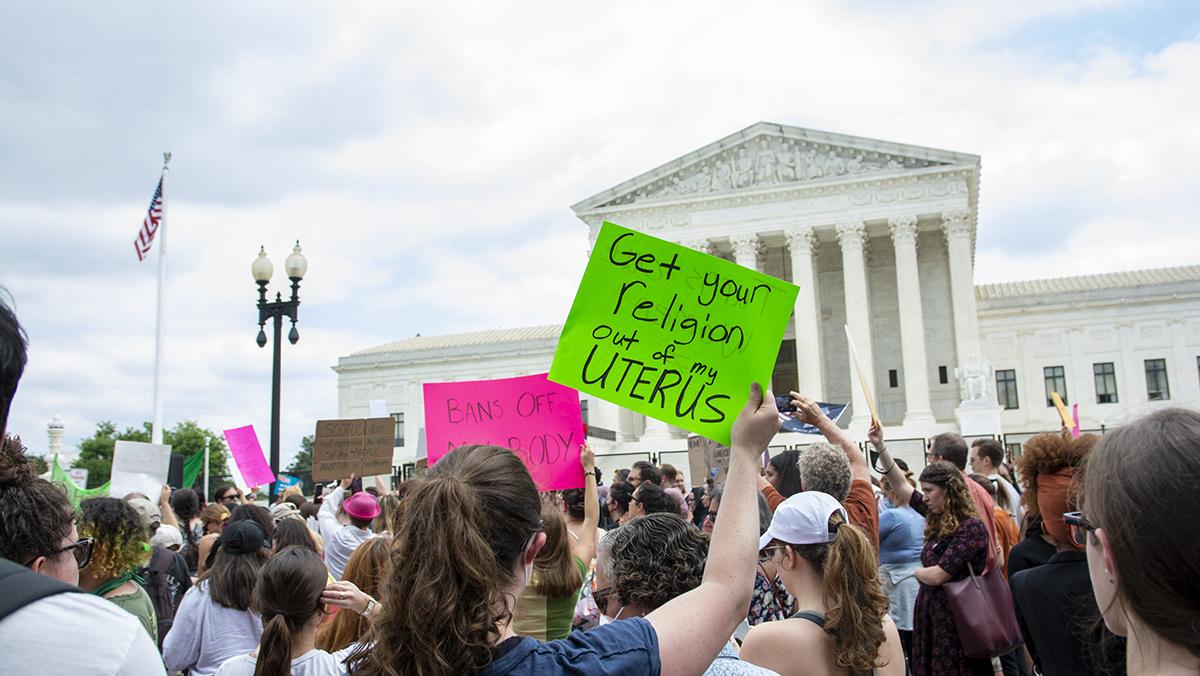 Protestors outside the Supreme Court on June 24. Eleanor Kay/The Ithacan 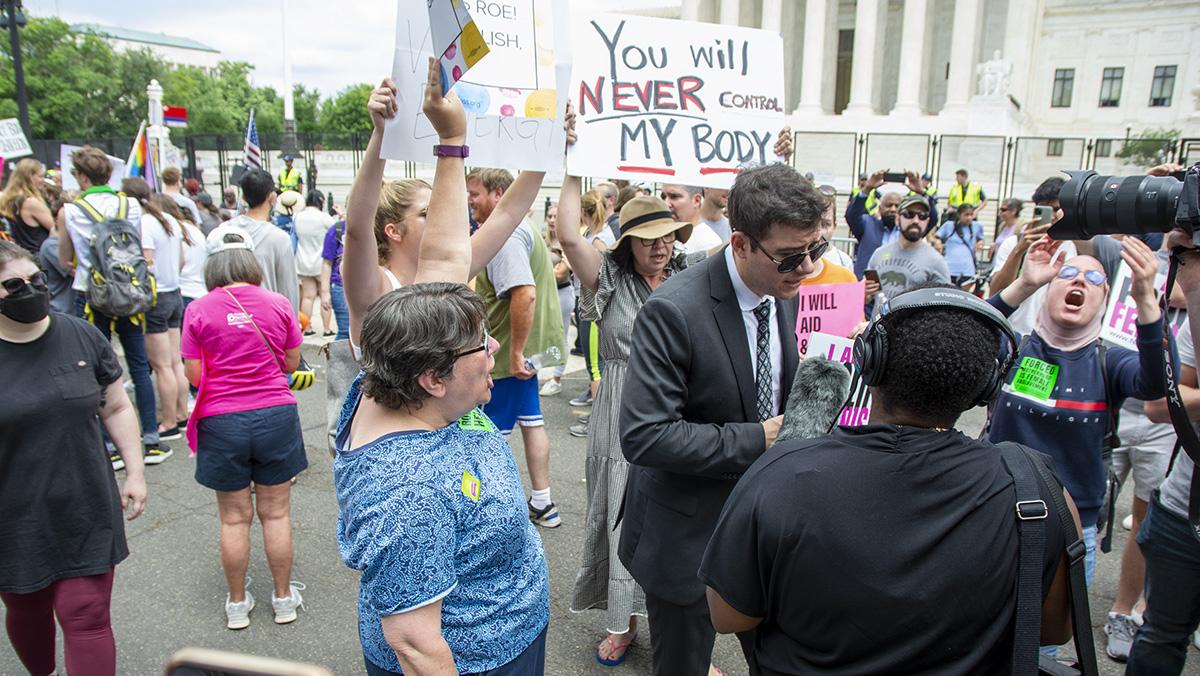 Pro-abortion rights protesters chanted "my body, my choice" while a man with a pro-life sign was doing an interview outside the Supreme Court on June 24. Eleanor Kay/The Ithacan 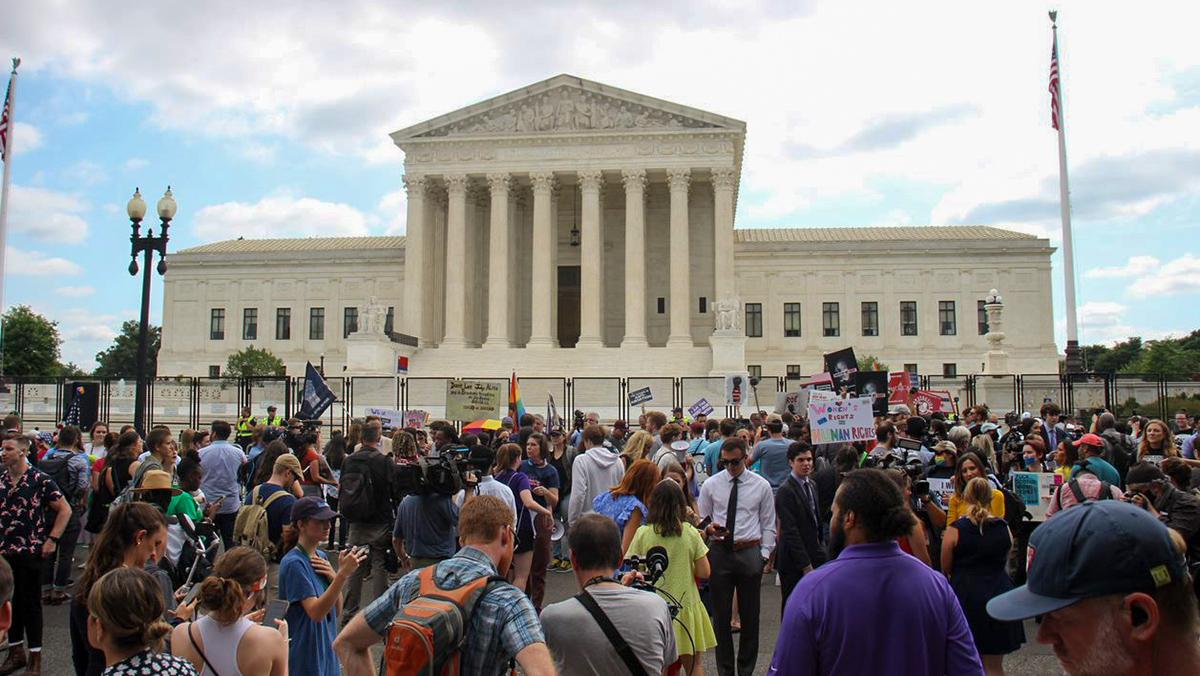 A group of protestors fill First Street NE after Roe v. Wade was overturned 49 years after it was released. Thomas Kerrigan/The Ithacan 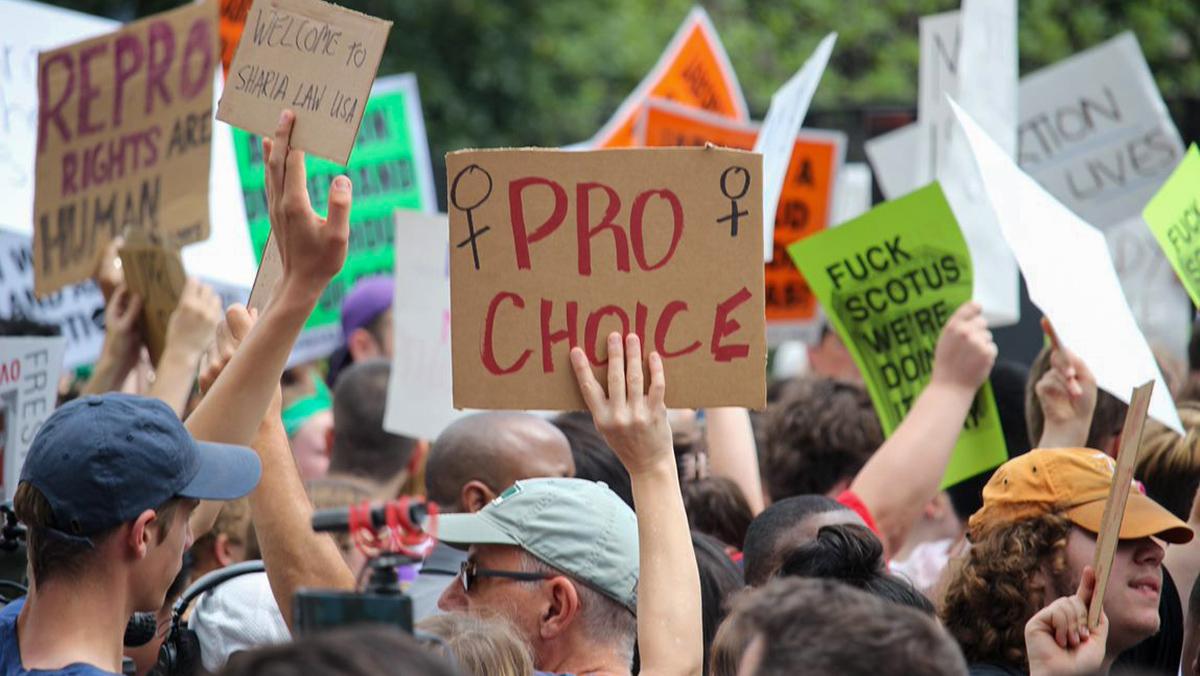 A demonstrator holds a sign labeled “Pro-choice” after Roe v. Wade was overturned this past Friday, June 24. Thomas Kerrigan/The Ithacan

Justice Samuel Alito wrote the majority opinion stating that Roe had to be overturned as “Roe was egregiously wrong from the start.” Alito’s opinion also stated “[Roe’s] reasoning was exceptionally weak, and the decision has had damaging consequences.”

Voting with Alito were Justices Clarence Thomas, Neil Gorsuch, Brett Kavanaugh and Amy Coney Barrett. Gorsuch, Kavanaugh and Barrett were all appointed by former President Donald Trump. The dissenting justices were Stephen Breyer, Sonia Sotomayor and Elena Kagan. Sotomayor and Kagan were appointed by former President Barack Obama. Chief Justice John Roberts wrote in the concurring opinion that the Supreme Court went too far in the decision to overturn Roe.

The decision was leaked to Politico in early May, garnering outrage across the country and in Ithaca. Multiple states have set forth “trigger bans” that would go into effect as soon as Roe was overturned. There are 13 states with these bans that will outlaw abortion — some of these states have had these trigger bans in effect for years, while others added them after the Politico leak or during the Trump administration. These states are Arkansas, Idaho, Kentucky, Mississippi, Missouri, North Dakota, South Dakota, Oklahoma, Tennessee, Texas, Utah and Wyoming. Trigger bans will go into effect 30 days from June 24. 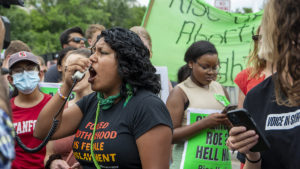 A pro-choice speaker at the protests outside the Supreme Court after Roe v. Wade was overturned June 24. Eleanor Kay/The Ithacan

In a statement to The Ithacan, Ithaca College’s chapter of Planned Parenthood Generation Action (PPGA) said that while they are devastated and angered by the decision, they are letting that fear and anger drive them.

“PPGA will continue to be a campus organization where we encourage people to stand up for what’s right, regardless of what current events are,” the statement said. “Additionally, we are always available as a resource for anyone who needs information, ways to get involved or someone to talk to.”

In response to the decision, members of the Ithaca community gathered at DeWitt Park on June 24. Amidst chants of “bans off our bodies” and “abort the court,” speakers representing Planned Parenthood of Greater New York and the Ithaca City Council rallied the crowd and called for the city and country to keep fighting.

Rachel Behling, an abortion doula at Planned Parenthood of Greater New York and a speaker at the protest, said the news of the decision came while the clinic was in the middle of a surgical abortion. Despite her outrage and pain, she said it was almost the perfect place to learn of the ruling.

“What better way could we be spending less time hearing of this news than taking care of patients?” Behling said. “There’s so many people in this country right now, [and] for them, it’s just like, it’s suddenly stripped away from them, this bodily autonomy and this agency, and so I am mourning the loss of that right now.”

While fighting through tears, Behling warned that this ruling sets a precedent for other similar decisions to be overturned. Even though residents of New York still have access to abortion, they might not be saved from other decisions that could be announced in the coming months.

Thomas wrote in the opinion that the court should look at other cases in the coming months. He specifically mentioned Griswold v. Connecticut, the 1965 ruling which gave married couples the right to obtain contraceptives; Lawrence v. Texas, the 2003 ruling which established the right to engage in private sexual acts; and Obergefell v. Hodges, the 2015 ruling that legalized same-sex marriage.

“Make no mistake, this decision goes beyond abortion,” Behling said. “This wrongful ruling is about who has power over you, who has the authority to make decisions for you and who could control how your future is going to be. It throws away nearly 50 years of precedent and it goes against the will of the American people.” 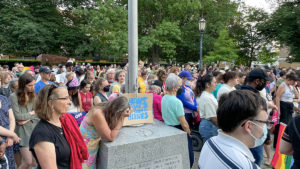 Ithaca College senior Taylor Callis, who lives in Pennsylvania, said they fear for their friends back home.

“I have friends that are staying in Pennsylvania from my hometown, so just thinking of what could happen to them [with this ruling],” Callis said. “But there’s such an uncertain future with our election that what if that’s taken away?”

Lisa Ali, an Ithaca native and current Colorado resident as well as a nurse and midwife, said she knows what impact this will have on people who want to be able to make their own choices regarding pregnancy. Although she said she knew this day was coming, it does not make it any easier to imagine the future without safe, legal abortions.

“I know what will happen if abortion becomes inaccessible, illegal and dangerous,” Ali said. “Women will die or be severely mutilated because that’s what happened before [Roe].”

Since the decision was leaked in May, Robert Cantelmo, alderperson for the Ithaca City Council, said the city has been taking steps to help as many people as possible get safe abortions. He announced at the protest that the council will vote in July to make Ithaca a sanctuary city for abortions, the first in New York state. If it passes, the city would not offer resources to any federal investigations looking into illegal abortions.

Behling also added that she is worried how this ruling will affect people of color or people with lower income levels. Now that some people need to travel hundreds or thousands of miles to get a safe and legal abortion, she said she is concerned about who might not be able to afford that.

For people in cities like New Orleans, the nearest abortion clinic is in Tallahassee, Florida, which is a six–hour drive or 13 hours by multiple buses. People in Edinburgh, Texas, will have to travel to Santa Teresa, New Mexico, which has an 11–hour drive time. People may also now have to take time off of work to travel to receive abortions, which may be financially dangerous for people.

Since the ruling, several companies have announced that they will cover travel costs of employees who have to leave their state to have an abortion. Some of these companies are Starbucks, Levi Strauss, PayPal, Amazon, Tesla, Reddit, Dick’s Sporting Goods and the Walt Disney Company.

“Abortion access should not be based on your zip code, income level or immigration status,” Behling said. “Abortion bans disproportionately harm Black, Latino, indigenous and other people of color because of this country’s legacy of racism and discrimination.” 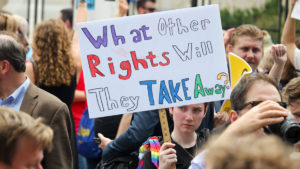 A demonstrator holds up a sign outside the U.S. Supreme Court after Roe v. Wade was overturned asking, “What other rights will they take away?” Justice Thomas stated in a concurring opinion that the court, “should reconsider all of this Court’s substantive due process precedents, including Griswold, Lawrence and Obergefell.” Because any substantive due process decision is “demonstrably erroneous,” the court has a duty to “correct the error.” The above cases focus on a right to access contraceptives and LGBTQ+ rights. Thomas Kerrigan/The Ithacan