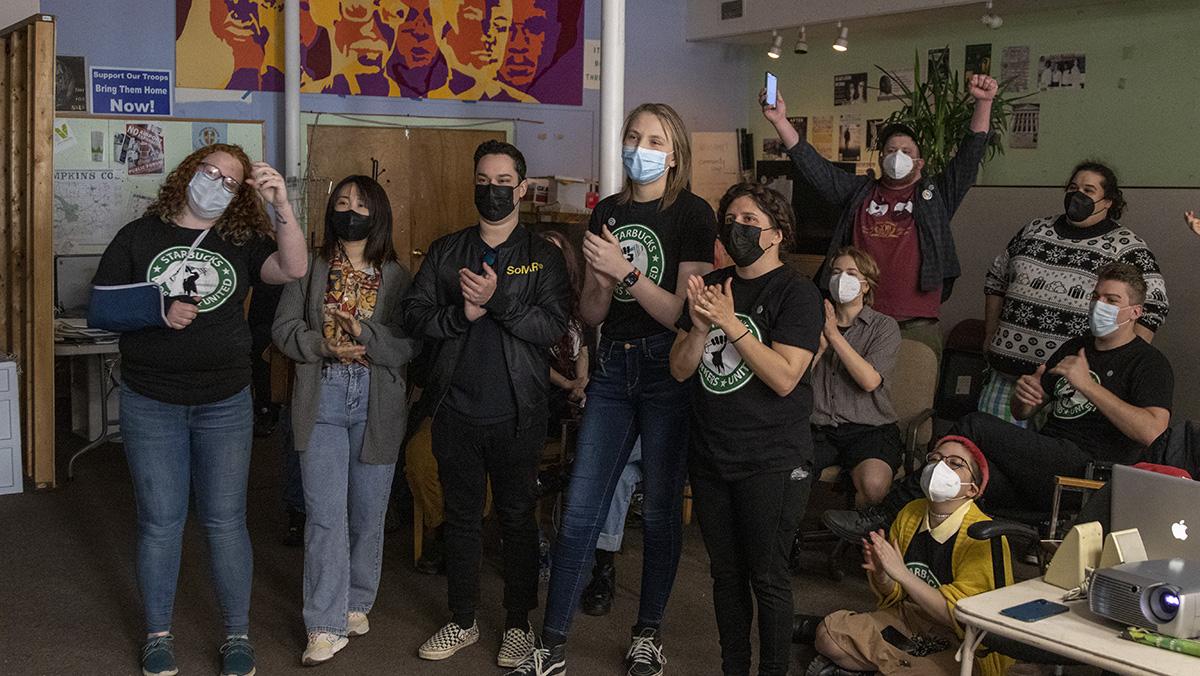 Thomas Kerrigan/The Ithacan
Ithaca's Starbucks workers celebrate their victories as a member of the National Labor Relations Board counts the ballots of their union vote via Zoom.
By Elijah de Castro — News Editor
Published: April 9, 2022

The workers of Ithaca’s College Avenue location — which is located at Cornell University — voted 19–1 in favor of unionizing and the workers of the 4-month-old Meadow Street Starbucks location voted 13–1 in favor. The workers of The Commons location voted 15–1 in favor after an unsuccessful unionization attempt two years ago. These new unions are the most recent of 16 Starbucks locations in the United States that have successfully unionized, affecting the roughly 70 workers who run Ithaca’s locations. As the votes came in and proved their enormous desire for unionization, the workers cheered and hugged each other.

“I’m feeling amazing,” Hope Liepe, a barista at the Meadow Street location, said. “We just really showed today that unions belong here at Starbucks. … I think it shows to Starbucks that there’s no amount of union busting that they can do to stop us.”

To watch the results, the workers gathered at the Tompkins County Workers’ Center and watched via Zoom as Tom Miller, a member of the National Labor Relations Board, counted the ballots from Washington, D.C.

Evan Sunshine, a labor relations student at Cornell and a barista at the College Avenue Starbucks, said the win comes after Starbucks management unleashed a plethora of union–busting tactics on him and his fellow workers. According to an April 8 press release by Starbucks Workers United, Starbucks hired a new manager at College Avenue during the union efforts who bullied workers and created a stressful work environment.

“We were experiencing a lot of union–busting tactics, a lot of management issues and a lot of turnover at a store with a lot of college students,” Sunshine said. “Recently, many student [workers] were denied time–off request[s] to go home for spring break and see their families.”

Ithaca College junior Gillian Rossbach has been a barista at Starbucks since 2017 and currently works at the Meadow Street location. Rossbach, who has been involved in the push to unionize Ithaca’s branches, shared her excitement in a statement to The Ithacan.

“I am ecstatic that we are officially unionized,” Rossbach said. “We worked so hard as a team to get here and it’s just really exciting to see our hard work paying off. Hopefully Starbucks will not postpone the negotiations as much as they can and we can reap the benefits [of the unions] as soon as possible.”

Sunshine said that when negotiations with Starbucks begin, the workers will be fighting for free health insurance, a tip minimum and a livable wage. Virgil Taylor, another worker, added that they will also be bargaining for regular schedules and livable wages. The job of a barista consistently ranks as one of the lowest paying jobs in the United States.

Chantel Wright, a worker at Meadow Street, added that they will be asking for free parking, as parking fees in Ithaca eat into the workers’ paychecks.

“I was spending upward of $75 a week to park to go to work,” Wright said. “That’s just not acceptable.”

The workers also addressed the recent reinstatement of Howard Shultz as chief executive officer of Starbucks as well as comments that he has made on ongoing unionization efforts. In November 2021, while speaking to a group of Starbucks employees in Buffalo while they attempted to unionize, Schultz made a comparison to the Holocaust. Shultz also said on April 4 that Starbucks is “being assaulted in many ways by the threat of unionization.”

A Zoom press conference after the votes were counted was Zoom–bombed by likely pro-Starbucks trolls. Disturbing audio of children and animals screaming came through Zoom. However, the workers did not let it ruin their spirits.

Starbucks is not the only major American corporation to experience large-scale unionization efforts or strikes for better working conditions. In 2021, both Kellogg’s and John Deere had workers striking for new union contracts. On April 1, Amazon workers on Staten Island voted to form the first union in Amazon history, after the company blew millions on corporate lawyers and deployed ruthless anti-union strategies.

“They [Starbucks management] used deceptive manipulation tactics to try to sway workers to vote no,” Sunshine said. “But despite it all, we were able to come together as an entire community. We are not just three stores. We are one community of Starbucks workers.”

Editorial: Importance of unionization needs to be recognized