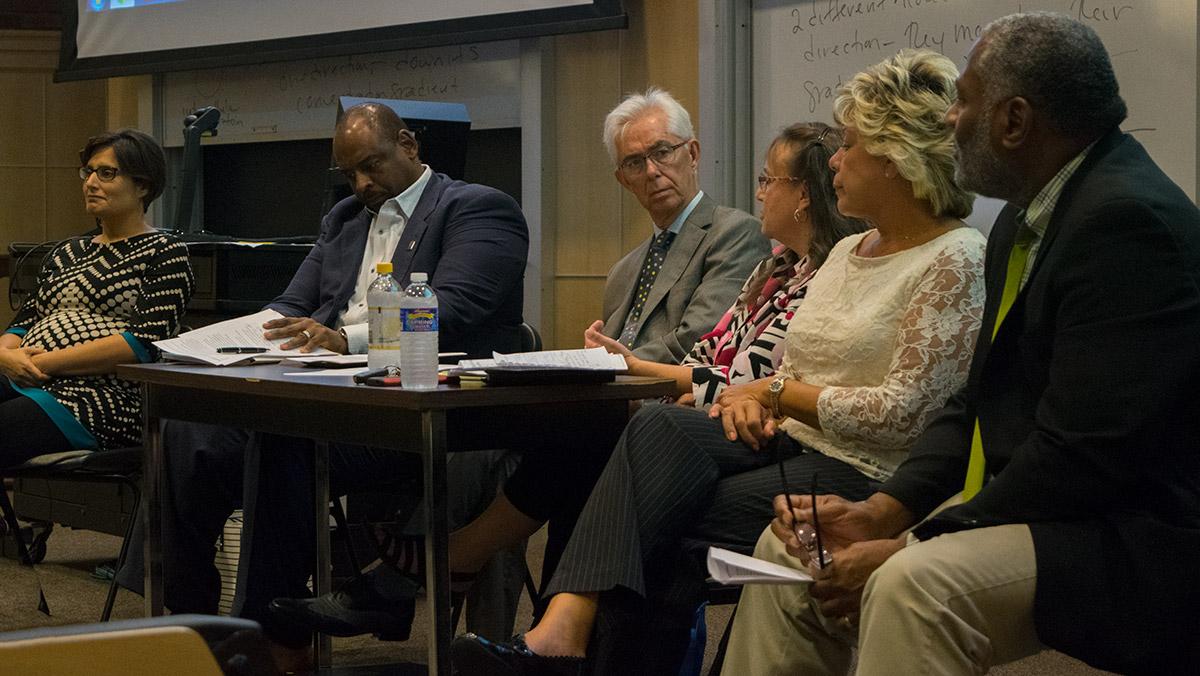 Lauren Ruth/The Ithacan
Key leaders of diversity and inclusion initiatives at Ithaca College spoke to about 50 members of the campus community during a panel and Q&A session Sept. 13 in Textor 102, focusing their discussion on increasing community engagement with diversity initiatives at the college.
By Nicole Pimental — Contributing Writer
Published: September 14, 2016

Just four questions were asked during the Q&A portion of a diversity and inclusion panel held Sept. 13. Among them was an anonymously submitted question about how the administration would continue to prioritize these initiatives amid high administrative turnover.

“It will be the job of that person to come into work each and every day to be taking a look at the initiatives that we have identified,” he said. “It’s important for us to understand that the list that we have is a living document not set in stone.”

Richardson and other key leaders of diversity and inclusion initiatives at Ithaca College spoke to about 50 members of the campus community during the panel in Textor 102, focusing their discussion on increasing community engagement with diversity initiatives at the college. The panel consisted of Richardson; Sean Eversley Bradwell, director for programs and outreach in the Division of Educational Affairs; Wade Pickren, director for the Center for Faculty Excellence; Terri Stewart, director of the Office Public Safety and Emergency Management; Brian Dickens, vice president for Human Resources; Mary Knapp, a leader of the Diversity and Inclusion Discussion Circle; and Belisa Gonzalez, co-chair of the Council on Diversity and Inclusion.

After a nearly 10-minute delay getting the one-hour meeting started, the panel members spent about 30 minutes recapping the progress they made from last school year to this year, touching on the updates already released on Intercom throughout the semester. These included the campus-climate survey, set to open Sept. 27, the creation of the multicultural student lounge on the third floor the Campus Center and the work on the Public Safety Satellite Office on the second floor of the Campus Center, as well as the external review of Public Safety.

Stewart said the office will look over and select a firm this semester and is looking to plan site visits November 8–10. She said the review will focus on fair policing policies.

Dickens said 99.6 percent of staff have completed their training requirement for diversity and inclusion, and 356 staff members at the college have taken three or more of the offered training courses on diversity.

The audience then had about 20 minutes to ask questions during a Q&A session.

Rebecca Lesses, associate professor and Jewish studies coordinator, posed a question concerning what the college was doing to increase diversity among the faculty. In response, Dickens said the college is trying to advertise for positions differently, among other hiring practices.

“Our search for all faculty positions, and intentional goal, is to find underrepresented groups, particularly, to join this particular part of our community,” Dickens said. “We are … creating different ways of how we place ads in terms of how we’re soliciting additional pools to enrich our actual pools for hiring.”

Wyatt, a freshman at the college who only gave his first name, expressed his concern about how the college is addressing disabilities within their diversity initiatives. Wyatt, who uses a wheelchair, said he felt alone at the college.

Richardson said this question proves that there is still work to be done regarding diversity on the campus.

“Your particular situation has really highlighted … accessibility and the issues and concerns all over campus in terms of all-over capital projects,” Richardson said.

In addition to the question submitted anonymously online, a student present asked what the college is doing to support minority religious groups on campus. Richardson said there is a program within Muller Chapel dedicated to reaching out to Cornell University for such support systems.

Bradwell said there should be more Q&A events like this one throughout the year. With this being the first one of the semester, the panelists emphasized the importance of the community’s taking on these diversity programs as a partnership.

“We want to represent the underrepresented,” Richardson said. “This is about building relationships, creating human to human contact.”