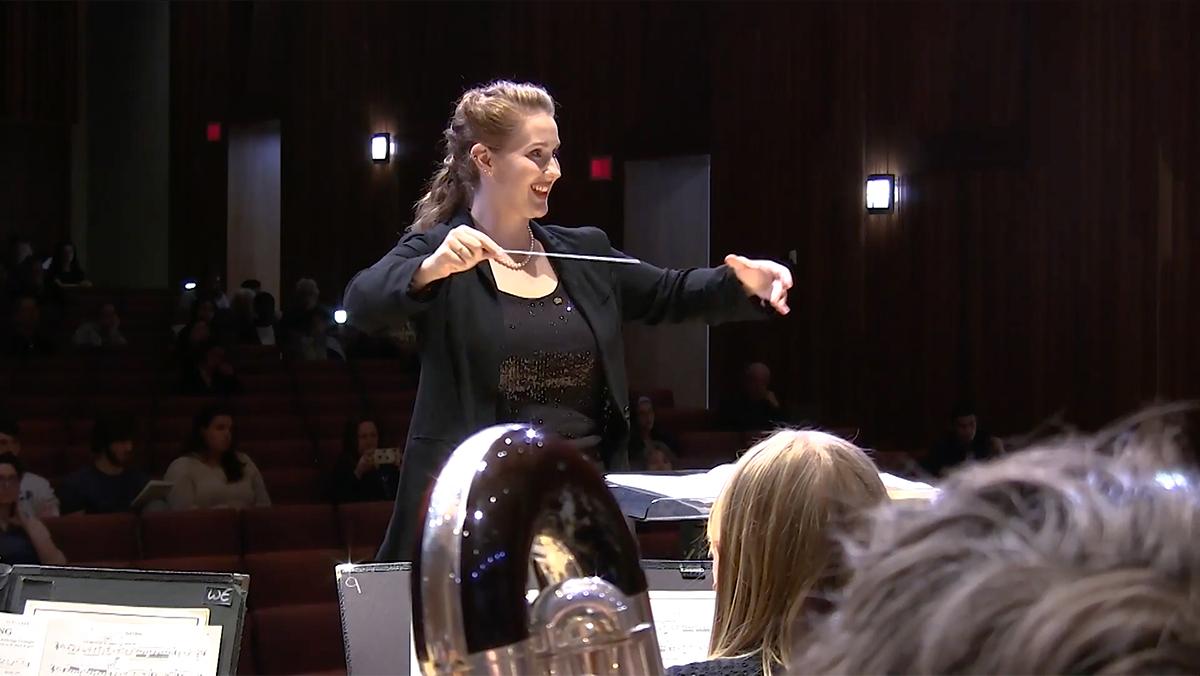 Editor’s Note: Each week, The Ithacan will be featuring programs and departments that the Academic Program Prioritization Implementation Committee has recommended to be cut.

Second-year graduate student Nicholas Villane is studying in the Masters of Music in Composition program at Ithaca College, with the goal of becoming a university professor. He already has two acceptances into doctoral programs, which he attributes to his experience in the program.

Out of the five graduate programs that are being recommended for discontinuation by the Academic Program Prioritization Implementation Committee (APPIC), four are Masters of Music (M.M.) in the School of Music. These programs include the M.M. in Performance, Conducting, Composition, and Suzuki Pedagogy and String Performance. Each M.M. is a two-year program with 30, 36, 30 and 32 credits required, respectively.

Students and faculty said they are astounded by the college’s decision to cut these programs, especially because the college started as a music conservatory in 1892.

“To be cutting a big part of what makes the conservatory part of the school the way it is was pretty shocking,” Villane said.

“As a graduate assistant, to be able to work with theory professors really closely and be able to learn skills that I hope to use in my own classroom in the future was an experience I don’t think I was going to be able to get anywhere else,” he said.

Senior Jon Aldave, a music education student who applied for the M.M. in Performance last semester, said the elimination of graduate programs not only denies undergraduate students the chance to continue their studies at the college but would also change the current undergraduate experience.

Charis Dimaras, professor in the Department of Music Performance, said he also believes undergraduate students would lose mentors if the graduate programs are cut.

“It cuts the bridge between our impressionable younger students that look at those graduate students as intermediate examples between us — international concert artists — and where they are at the moment, and somehow are able to imagine now their future towards reaching higher and becoming more,” he said.

“With the grad students leaving, there’s a good chance that we will have very limited possibilities for offering classes to non-majors, which of course runs completely contradictory to the Ithaca Forever plan, which has as one of its components that schools should be more integrated,” said Les Black, chair of Graduate Studies in Music and associate professor in the Department of Music Theory, History and Composition.

In describing the rationale for cutting the graduate programs, the “Shape of the College” document created by the APPIC states, “We have recommended discontinuance of some programs which have constantly not generated net income.” Despite this explanation, several faculty members in Whalen are not convinced that cutting these graduate programs will save the college money.

The graduate music programs altogether bring in a surplus of approximately $125,500 annually, according to the department.

Graduate students and assistants accompany music for undergraduate performances. Black said this work is estimated to be between an equivalent of $50,000 and $70,000 by a professional accompanist.

“We as pianists, me personally and my students as pianists, are the least troubled by these because we are independent, we play the piano, we have no needs for anybody, but the rest of the school without us can simply not survive,” Dimaras said. “Music as we know it cannot survive.”

Some graduate classes are cross-listed as undergraduate classes, Black said. Even though the APPIC is recommending cutting the full-time equivalent faculty positions in the School of Music from 87 in the 2019–20 fiscal year to 66 by Fall 2023, some classes that graduate students would have taken will still need to be taught by professors for their undergraduate students.

“They didn’t take into effect all the things that they do within the School of Music that either just aren’t going to be there or are going to cost a lot of money to replace,” Black said. “So, it’s a fairly complex equation and I’m just afraid that people didn’t consider all sides of that when they made the decision to cut these programs.”

“It makes me reconsider sending my current high school students to apply, and that’s just sad,” Comeau said. “I would love to say, ‘Go get a degree at Ithaca,’ but it’s really difficult for me to do that when it feels like the school as a whole doesn’t support that music grad program.”

“You’re going to see a serious difference in the positivity of the campus because of those students who don’t get that musical outlet,” Comeau said. “That’s a real shame that you would lose the opportunity to be a part of something that you love to do.”