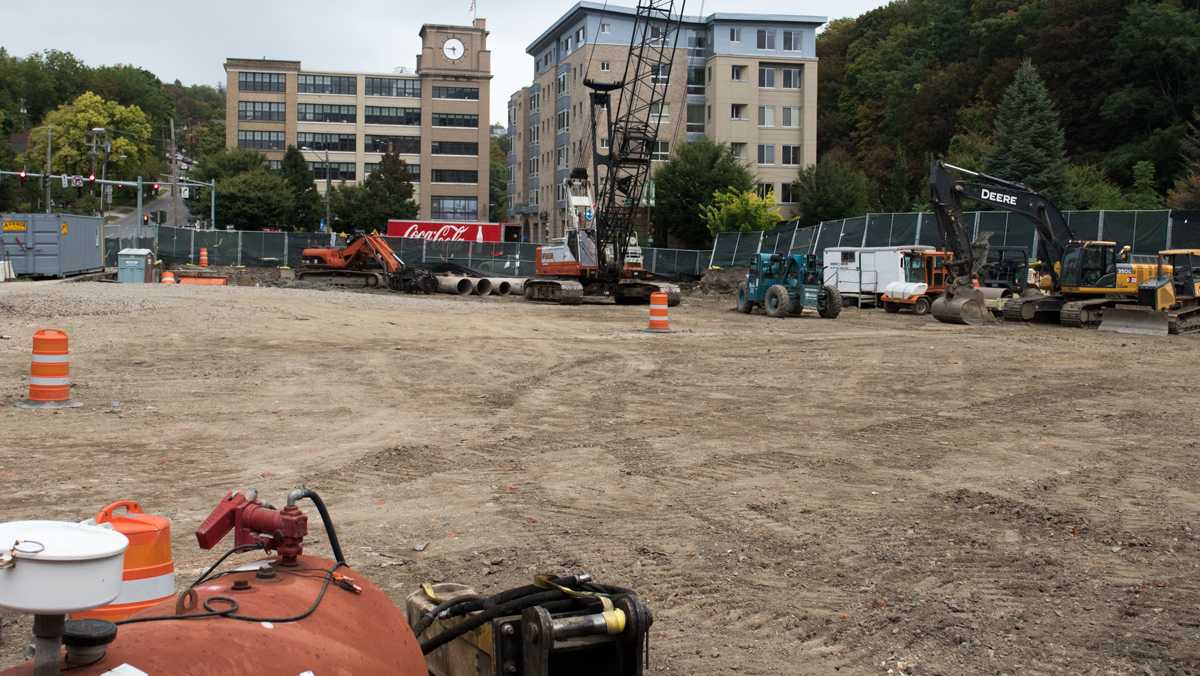 Connor Lange/The Ithacan
The project City Centre is located on a triangular lot that wraps around the corner of East State Street and South Aurora Street. The lot previously held the Trebloc Building.
By Maggie McAden — Contributing Writer
Published: September 28, 2017

Ithaca College students returned to campus from summer break to find another construction project underway on The Commons.

The project, which is called City Centre, is located on a triangular lot that wraps around the corner of East State Street and South Aurora Street. Previously, the lot held the Trebloc Building, which housed offices for the Park Foundation, Elmira Savings Bank and Warren Real Estate.

Cornish said the approximately 177,500–square foot structure is being built by Newman Development Group, a New York–based firm that also built the 140 Seneca Way apartment complex, which opened in 2014.

“We are pretty excited that they are involved in this, and they are really great to work with for us,” Cornish said. “For us, that takes a lot of pressure off of the city, when we know we are working with really responsible developers.”

The project has also caused controversy in the Ithaca community. Originally, it was designed to be an 11-story-high, dormitory-style residence geared toward college students. It would have housed approximately 600 beds.

However, the developer, Campus Advantage, failed to gain approval for the project due to public concerns that both its size and design would bring too many students into the heart of downtown, clashing with Ithaca’s small-town culture, Cornish said.

“People thought that it was just too big for the site,” Cornish said. “That created controversy, but the bigger controversy, which I was really surprised [about], is that people said, ‘I don’t want 600 undergrads in the center of downtown. It’s just going to be a nightmare.’”

Previously, Campus Advantage had designed the building to function as student housing, complete with resident assistants.

“They brought the building down a couple of stories — I think it was three stories, actually — and they also reduced the number of beds by half,” Cornish said. “We can’t exclude students because that’s a discriminatory practice, but this will probably be geared more towards young professionals, empty nesters and grad students who have a little bit of a calmer lifestyle.”

Jeff Smetana, vice president for development at NDG, was involved with the development and approvals for the project, and said that after a series of meetings with the city, he is confident that he has met their expectations.

“I think that we really kind of responded to what the city and the community were looking for with this mix-use, market-rate project,” Smetana said.

City Centre, which will have approximately 70 parking spaces available in an underground parking garage, does not have enough parking to accommodate all residents. Cornish said that developers expect that not all residents will own or use cars.

Cornish also said that many parking garages downtown have excess capacity, and that there is an app, Parkmobile, that allows both residents and visitors to digitally add time to parking meters.

“We actually do have excess parking, but people’s perception is that there is no place to park,” Cornish said.

Longtime Ithaca resident Louis Cassaniti has lived in the city for 72 years and works on The Commons as a street vendor. He said that while parking is a prominent issue, he believes that the city’s new codes about density and parking will actually encourage urbanization and promote the use of public transportation.

“The laws are relaxed as far as how many parking spaces you need, so it’s the urban atmosphere that they are creating,” Cassaniti said. “We are definitely short of parking spaces, but that’s in every city, so we have to live with it, but this new building will be basically oriented towards commuters.”