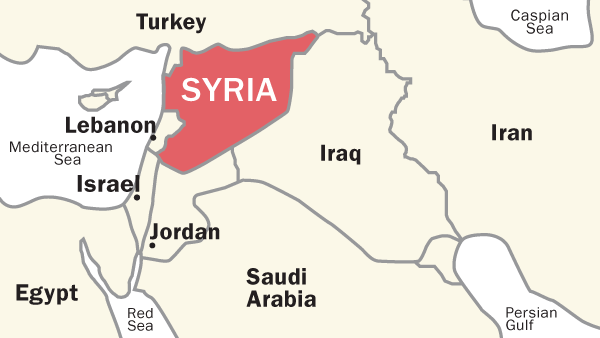 President Barack Obama addressed the nation Tuesday to justify intervening in Syria, which has been at civil war for more than two years, to force Syrian President Bashar al-Assad to relinquish his chemical weapons, which Assad agreed to do under threat of a U.S. cruise missile strike.

The U.S. government threatened a military intervention in Syria after an Aug. 21 chemical weapon attack killed more than 1,400 people in Ghouta, a farming village near the capital city, Damascus. According to U.S. intelligence, Assad’s forces perpetrated the attack. U.N. investigators reported Assad was most likely responsible, but also said opposition forces have committed atrocities against civilians and Assad’s army.

Russian President Vladimir Putin convinced Assad in secret meetings Tuesday morning to agree to the demands of the U.S. and allow the international community to confiscate and destroy the chemical weapons.

The U.S., Russia and Syria are still negotiating the details of the relinquishment. According to the BBC, Russia vetoed the U.S. and France’s initial plan to require Syria to destroy its chemical weapons before a deadline or face military strikes. U.N. Secretary-General Ban Ki-moon said the U.N. should oversee the destruction of the chemical weapons without threat of military force.

“I’m going to be severely disappointed if we end up bombing Syria,” Siegel said. “I feel represented by Congress as of right now, but Obama has the ability to do whatever he wants.”

Jeff Cohen, associate professor in the Department of Journalism and director of the Park Center for Independent Media, said Obama has not communicated the complexity of the Syrian Civil War to the public.

“There’s a huge education process going on,” Cohen said. “People are trying to fill in the gaps left by mainstream media.”

“Assad’s regime belongs to the Alawite minority [sect of Islam], but the regime by and large has been a secular, authoritarian state,” Boroujerdi said. “Remember, in many Middle Eastern countries, secular is not equal to the most democratic.”

The rebel groups are not a united front, but rather several factions with opposing ideologies, Boroujerdi said. Assad was able to incite discord among the opposition groups by appealing to minority groups, including Kurds, Christians and Alawites, that have retaliated against sectarian violence by Sunni Muslims. Sunnis represent 60 percent of the Syrian population, he said.

“The struggle that started over civil demands has now deteriorated into a conflict where, on the one hand, you have a brutal state, and on the other hand, you have brutal opposition forces,” Boroujerdi said.

Foreign guerilla fighters, most of whom belong to al-Qaida, have also moved into Syria, causing violence to spill across borders into the neighboring nations, Cohen said.

“Iraq is not ancient history,” Cohen said. “The al-Qaida fighters in Iraq are now in Syria. And before the U.S. invasion, there was no al-Qaida in Iraq.”

Cohen said in the face of the humanitarian crisis in Syria, the U.N. has unsuccessfully attempted to get Assad and the opposition leaders to sit down for negotiations. He said one of the main obstacles to peaceful negotiations is that the opposition groups demand Assad to be removed from power before they agree to attend peace talks.

In his speech Tuesday, Obama said Assad might not have agreed to give up his chemical weapons if the U.S. had not threatened military intervention.

Sophomore Hannah Sellers, a member of the college’s Model U.N. team, said she felt the U.S. had not done enough to pursue peaceful negotiations.

“It’s good that legitimate negotiations are happening, but I think it’s unfortunate that it has to be under threat of military interference,” Sellers said.

Boroujerdi said the U.S. has also involved itself in the Syrian Civil War by arming the opposition groups even before threatening to use cruise missiles. Throughout the civil war, Saudi Arabia, Qatar and Turkey — which are all Sunni majority nations — have supplied the Syrian opposition forces with weapons and ammunition, Boroujerdi said. Iran and Hezbollah, a militant Shiite Muslim group, support Assad’s regime, he said.

Cohen said other members of the U.N. have discussed diplomatic solutions that focused on demilitarization.

“You stop the arms flow going in, and then you force both sides to Geneva for the talks,” he said.

Cohen said the U.S. is hypocritical in condemning Assad for using chemical weapons when the U.S. has used and continues to use biological weapons, such as Agent Orange in the Vietnam War and white phosphorus in Iraq and Afghanistan.

Jim Murphy, a veteran of the Vietnam War and a member of Vietnam Veterans Against the War, said the sarin nerve gas in Syria was most likely produced in the U.S., which supplied it to Iraq during the Iran-Iraq War from 1980 to 1988. The U.S. also supplied biological weapons to Iran, and sarin nerve gas could have been smuggled out of Iraq.

Sophomore Anne Bongermino, a member of IC Human Rights, said it’s imperative that Americans understand what is happening in Syria and not to blindly support military intervention.

“People should do their research when forming their opinions,” Bongermino said. “A human right is being violated, but the actions to take — as Americans and as humans — from here out are in a more gray area.”