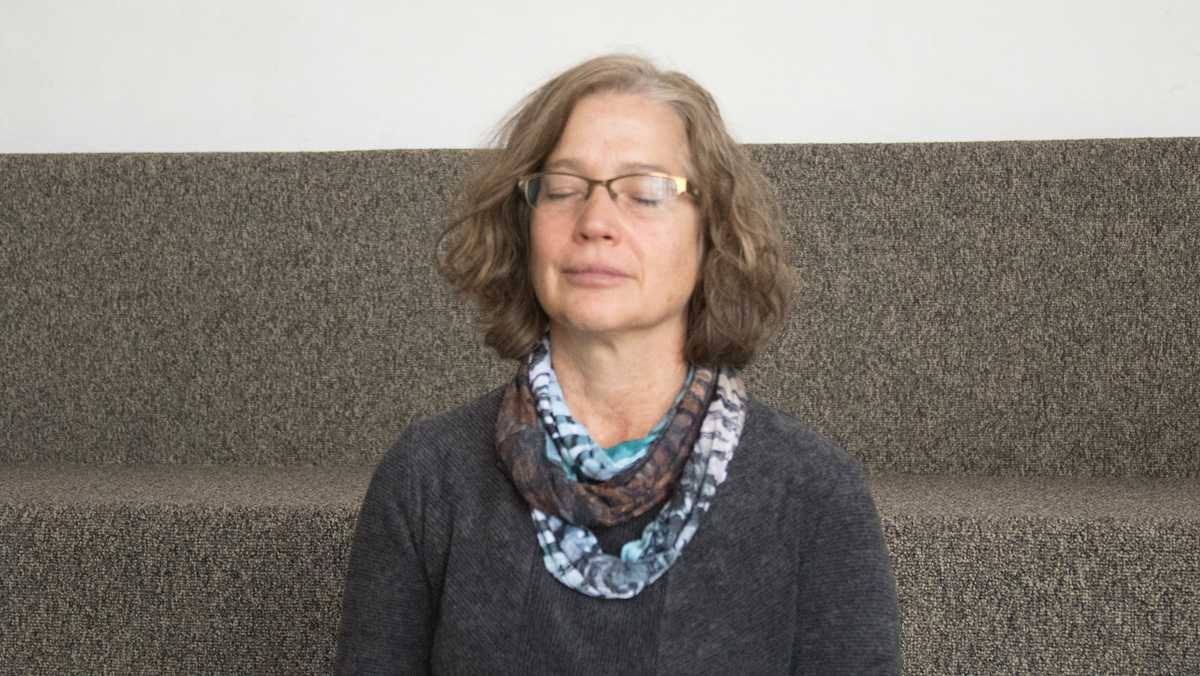 gabriel fernandes/the ithacan
Kathryn Caldwell, assistant professor in the psychology department, is one of the professors leading meditation sessions in Muller Chapel. They are held twice a week.
By Meredith Burke — Staff Writer
Published: November 15, 2017

Guided afternoon meditation sessions for both beginners and experienced meditators have been opened to faculty, staff and students at the Ithaca College Muller Chapel as of late October.

“Meditation is important to us personally, and … we’d like to make sure that there’s a space for people to learn about and practice meditation on campus,” Erickson said.

The sessions are open to the college community and take place each Monday, Wednesday and Friday from noon to 1 p.m., but attendees are welcome to arrive and leave as they please, Lapp said. As of now, Caldwell said, typically two to three people will attend a session, however, sometimes as many as 10 people will come, and some professors will even bring their classes.

The meditation process is simple and begins with one of the professors asking the attendants to focus on the support they are gaining from where they are sitting on the ground. The instructor then asks participants to relax all of the muscles in the body until the meditators are focused solely on their breathing.

Kristine Slaght, director of risk management and insurance, said that when she attended a session, she found it to be very relaxing and that it increased her sense of well-being. She said that her experience with the session was very positive and that she planned to attend again.

“During the hectic day, it’s nice to get a break and just come over to have some quiet,” she said.

The newly created meditation program is a part of what the professors said they hope could be a larger plan for an overall contemplative campus, or contemplative pedagogy. The pedagogy would incorporate contemplative exercises into both classrooms and the college community, as the internal, interpersonal and academic benefits of the exercises all work toward ultimately building a higher performing academic and overall college community, Caldwell said. This idea is also promoted by organizations like the Association for Contemplative Mind in Higher Education, which advocates for internal reflection being incorporated into school curriculums, which is what Caldwell said she and her meditation colleagues gained their inspiration from. She said they attended a few conferences held by the organization in the past.

“We are three people who are interested in contemplative education,” Caldwell said. “But how can we use those types of practices in the classroom to enhance learning, to enhance reflective thinking, even critical thinking, to enhance well-being? … It’s kind of thinking about the whole student.”

Erickson said she is a certified Koru Mindfulness teacher. She received her certification from a program centered around teaching meditation to emerging adults at Duke University. Lapp said that her first training in meditation began in 1993, when she lived in Gampo Abbey for a year, which is a Tibetan monastery on Cape Breton Island in Nova Scotia. Currently, she is taking courses to become an instructor for Mindfulness Based Stress Reduction, which is secular-style form of meditation centered around relieving stress and chronic pain.

Lapp said that practicing meditation provides time for college students to sit quietly and reflect. She said meditation is beneficial for an individual’s ability to function academically, improves their understanding of themselves and alleviates stress.

“In my experience, meditation helps everyone in so many ways,” Lapp said. “There’s just so much evidence now … that we don’t allow ourselves as much of that contemplative headspace that we could, and that there are so many benefits to engaging in this type of deep thinking and feeling.”

Lapp said she is also hoping to expand the meditation sessions to the point where they can be led by students, which will make the program more inclusive and present on campus. She said her and the other professors hope to continue through the spring semester. Erickson also said she plans to potentially offer meditation training as a class, so that students will eventually be able to host their own sessions.

“I have some training in a particular form of teaching meditation to college students,” Erickson said. “So, I’m hoping that we could maybe train some students in the spring and have additional meditation opportunities in the fall.”

Correction: The article incorrectly stated that only Caldwell conducted the survey. It has been corrected.

Faculty, staff, and administration are advocating for educating the campus about women’s heart health through a variety of events through the “Go Red for Women” campaign.

Breathing, an unconscious bodily process, is not usually associated with inspiring international change. But spiritual leader Sri Sri Ravi Shankar believes this basic life practice is the first and most important step to establishing worldwide unification and peace. “We have one message,” Shankar said. “We want to create a stress-free, violence-free society … and bring…