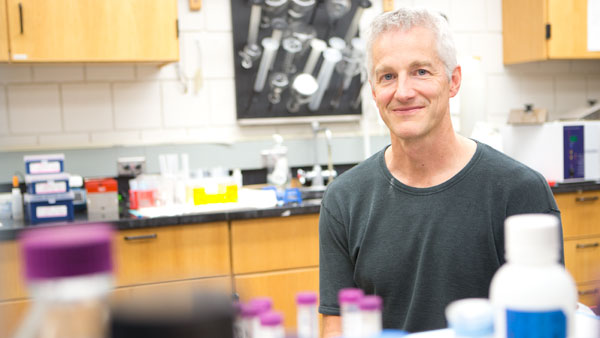 Durst Breneiser/The Ithacan
Andy Smith, professor and chair of the Department of Biology, was nationally recognized for his research on slugs that produce glue as a defense mechanism. Smith said this glue may eventually replace surgical stitches.
By Noreyana Fernando — News Editor
Published: September 11, 2013

Andy Smith, Ithaca College professor and chair of the Department of Biology, stepped into the national media spotlight last month for his research on slugs that produce a glue that may eventually replace surgical stitches.

Slugs are among select animals, such as mussels, barnacles and sea urchins, that produce similar glues. Smith, who was featured on Discovery News, Weather.com and Science Daily last month, said the glue, which is produced by slugs as a defense mechanism, is exceptional.

“The reason we study slugs is they have glue that is just amazing,” he said. “It is incredibly sticky. It solidifies within seconds into something like a rubber band.”

Smith said stitches may leave scars, irritate skin and take longer to perform, making glues a safer and more efficient option. He said a world without stitches may not be far off.

Smith said the 12-year-old research project seeks to make a synthetic copy of the glue by first understanding how it works. Smith said the glue is 97 percent water and 3 percent polysaccharides and polymers.

“The trick with the glue is that you have to take something that can flow to fill a gap across a surface and solidify in some way,” he said.

Smith also said slug glues are more versatile than liquid stitches, which are based on chemicals found in superglue. He said these liquid stitches cannot fill gaps in an uneven wound and pose some risk of toxicity and irritation.

His research team, which comprises three college students, has also discovered a surprising component of the slugs’ glue — metals.

“The metals are the parts that do the cross-linking,” Smith said. “For example, calcium is very common, and calcium can hold the polymers together. Iron and copper are common, and those can react with polymers and create spots to join them together.”

However, Smith said knowing the ingredients is not enough.

“I think of it like a cake,” he said. “It’s one thing to know the ingredient list of a cake, but you have to know how to put them together. If you just throw them in a bowl, you don’t have a cake. You have to do things in a certain order.”

Each summer, the research process begins with Smith walking through the South Hill Natural Lands to collect several hundred slugs. He said he is careful when handling them to ensure they don’t secrete the defensive glue.

In the lab, Smith said, he and his team gently poke each slug with a spatula and collect the glue. The glue is then frozen for use over the year, and the slugs are returned back to the woods. Smith said there is about a 95-percent survival rate for the slugs, because some specimens are kept for tissue samples.

Smith said there is active research across the country on the use of these glues.

Senior Sarah Rabice, a biochemistry major, is one of the student researchers on Smith’s team. Rabice is responsible for studying the glue’s proteins in their native form and has worked in the lab for 1 1/2 years. She said her work in Smith’s lab has prepared her for her journey through medical school.

“Confidence and knowledge as a scientist has been a big part of it,” she said. “It’s a learning experience to go from being so dependent on the professor to being able to create your own experimental procedures and know what the logical next step to take is in the scientific method.”

Senior Arit Ntekim is a biology major who also works in Smith’s lab, where she began working on histology, but went on to test how each component of the glue affects its function. Ntekim said her work in Smith’s lab gave her a sense of independence.

Professors in the biology department usually have about three student researchers on their teams. Other topics of research in the department include “Mechanisms and pathways of cholesterol transport inside cells” and a South Hill animal census.

Smith said student researchers are given other opportunities in addition to hands-on work in the labs.

“Many science professors at IC take interested students to professional conferences where the students can present their work to the scientific community,” Smith said. “Many students also co-author papers with faculty members. In fact, over the past five years, 20 percent of our graduates have co-authored papers in international science journals — often highly prestigious journals.”

Smith said he is the only scientist in the world who is publishing research on the structure and function of slug and snail adhesives. He said if the research team successfully synthesizes the glue, the product would have to pass tests and trials before it enters the market.