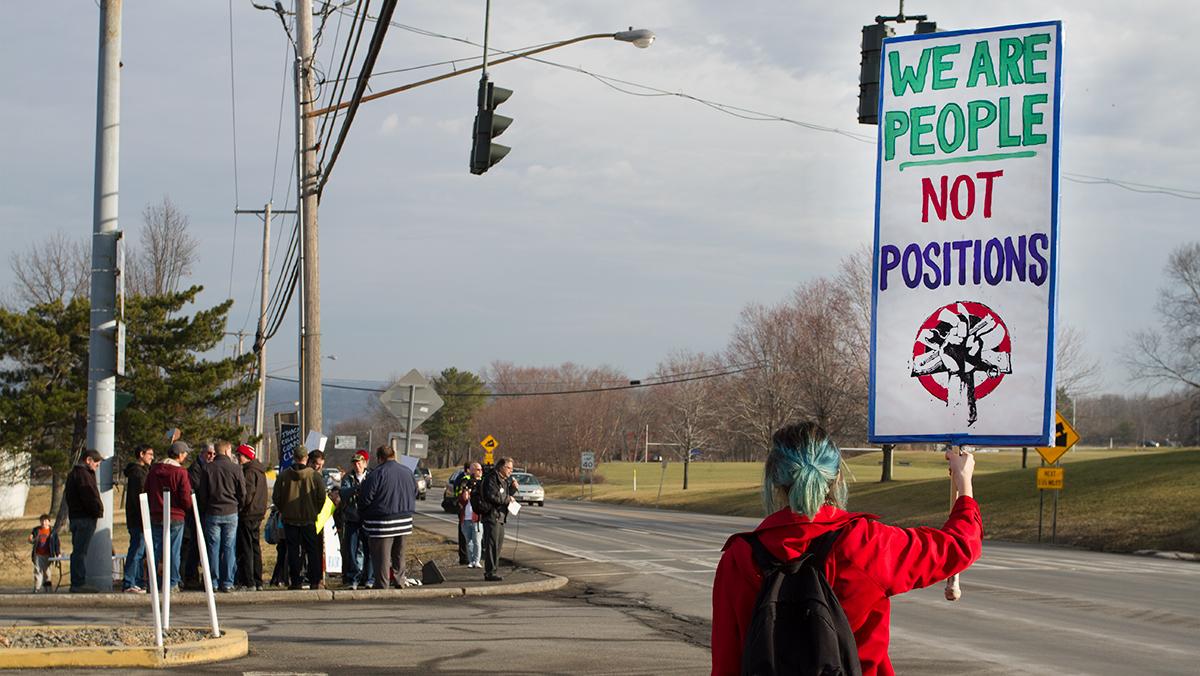 Fernando Ferraz/The Ithacan
A protestor holds a sign at the Feb. 24 rally held by the Ithaca College contingent faculty unions. The Office of Public Safety and Emergency Management have threatened legal action against the unions if they continue to protest at the front entrances of the college.
By Grace Elletson — News Editor
Published: March 1, 2017

The Ithaca College Office of Public Safety and Emergency Management has sent a letter to the college’s contingent faculty unions warning of action up to “legal proceedings” if protests continue to occur at the entrance of the campus.

The letter, addressed to Chris Machanoff, the unions’ Service Employees International Union representative, stated the contingent faculty rallies held Feb. 20 and 24 violated the College Rules for Maintenance of Public Order. The letter is signed by Public Safety Director Bill Kerry and comes on the heels of two bargaining sessions between the college administration and the unions.

“Failure to abide by these rules could result in a variety of actions up to and including legal proceedings,” the letter stated.

The letter stated that in order to lawfully protest near the college’s property, any picketing activity at the entrance of the college needs to remain outside of the college property; all entrances need to remain accessible and cannot be blocked; protests cannot interrupt teaching, guest lectures, research, disciplinary proceedings or free movement. It also stated that picketers can demonstrate at the Free Speech Rock if they give the Office of Campus Center and Event Services 24 hours’ notice.

Kerry said the intent of the letter was not to restrict protesting at the college. He said that at the two rallies held by the unions Feb. 20 and 24, the demonstrators violated certain traffic and pedestrian safety laws — prompting the letter — but would not disclose which ones were violated.

Machanoff said he interpreted the letter as threatening to arrest demonstrators for protesting on campus. Brody Burroughs, lecturer in the Department of Art, said he thought the letter was another tactic by the college to silence the unions. 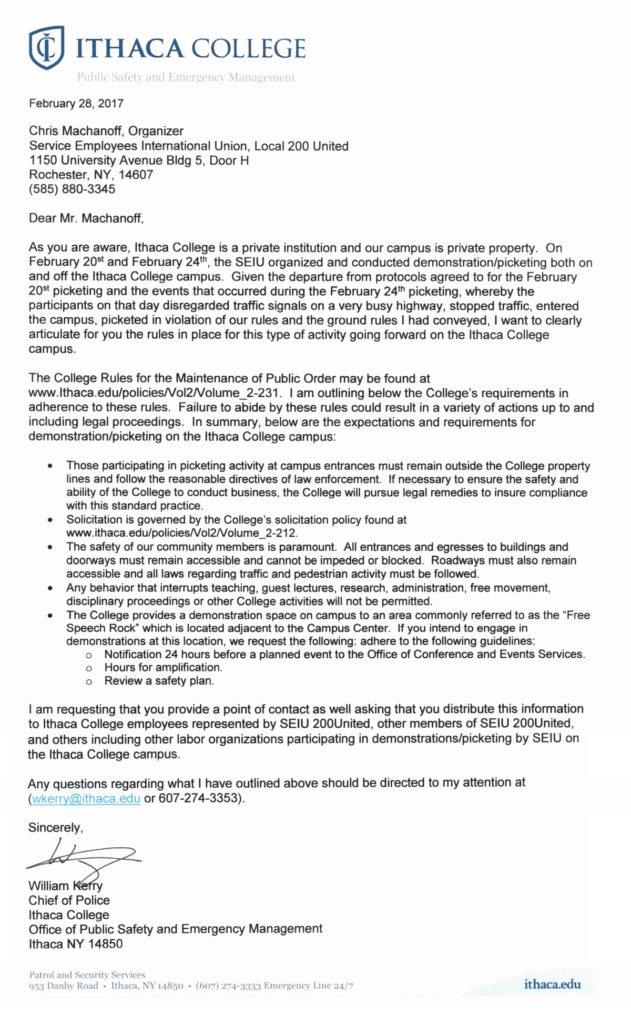 In the wake of the letter, Burroughs said a silent protest by the unions and IC Students for Labor Action will take place at 6 p.m. March 2 outside the Emerson Suites. At 6:30 p.m., the Ithaca College Board of Trustees will be holding a cocktail party celebrating the creation and implementation of IC 20/20. Burroughs said the board of trustees denied the union’s request to meet with them to discuss bargaining issues because it felt those issues were best resolved through the bargaining process.

The most recent bargaining sessions were held Feb. 21 and 24, where the administration gave the part-time faculty the largest compensation increase offer yet, but faculty members say it is still not enough to satisfy the unions.

During the negotiation sessions, the pressure was on to make progress in the wake of the union’s strike authorization vote Feb. 14. The college’s bargaining unit stated in an Intercom announcement that the administration offered a 14.3 percent raise to the part time–faculty union over the course of four years, which would raise the current three-credit course from a value of $4,200 up to $4,800 in the final year of the agreement.

As for the full–time contingent faculty union, its session was spent tentatively agreeing to 11 articles, all of which Rachel Kaufman, lecturer in the Department of Writing, said were verbally agreed upon over the summer, thus showing no progress.

Burroughs said this range is misleading. He said the part time–faculty union is asking for a 42–43 percent increase over five years, which would give it pay parity to the lowest–paid full-time contingent faculty member, who makes around $48,000 a year, but at half-time, which would be about $24,000. He said the administration might have broadened the range because the union is also asking for raises as a part-time faculty member gains seniority by working at the college for a certain number of years.

“This structure is an attempt to say, ‘Well, we’re committed to this idea because it’s modeled around fairness,’” Burroughs said.

As for the full-time contingent faculty union, Megan Graham, assistant professor in the Department of Writing, said she does not feel progress was made in the union’s most important goal: expanding job security. She said the administration gave the union a proposal that would allow contingent faculty members on one-year contracts to face three options at the end of a three-year period working at the college: One, their department can review their performance and offer them another one-year contract; two, the college can open up a non–tenure track position and give the contingent faculty member a guaranteed interview for the position; or three, the faculty member could not be rehired.

Graham said the union would prefer that at the end of a three-year period, as long as faculty members have positive evaluations — which are currently not required for one-year contract faculty members but which the unions want to establish — they should automatically be rehired in a longer-term contract as long as there is still a need for the class.

The college’s bargaining committee stated that negotiation sessions have been scheduled for March 8, 10 and 15 for both bargaining units, but both Burroughs and Kaufman said this is not true. Burroughs said the unions have not decided if they want to come back to the bargaining table.

Dave Maley, senior associate director for media and community relations, stated in an email that the three bargaining dates were offered and confirmed at the Feb. 24 contract negotiation session with the union. He stated the statement issued to the community Feb. 24 accurately represented the future bargaining sessions; however, by Feb. 26, there was an issue with the confirmation of dates.

“With the continued assistance of a neutral federal mediator, the college believes that further negotiations will help the college and the union reach final contract agreements,” Maley stated.

But Burroughs said progress has been painfully slow.

“We have spent so much time in that room doing nothing,” Burroughs said.

For now, Burroughs said other actions are being discussed to further pressure the administration to meet their demands and that a strike is not off the table.