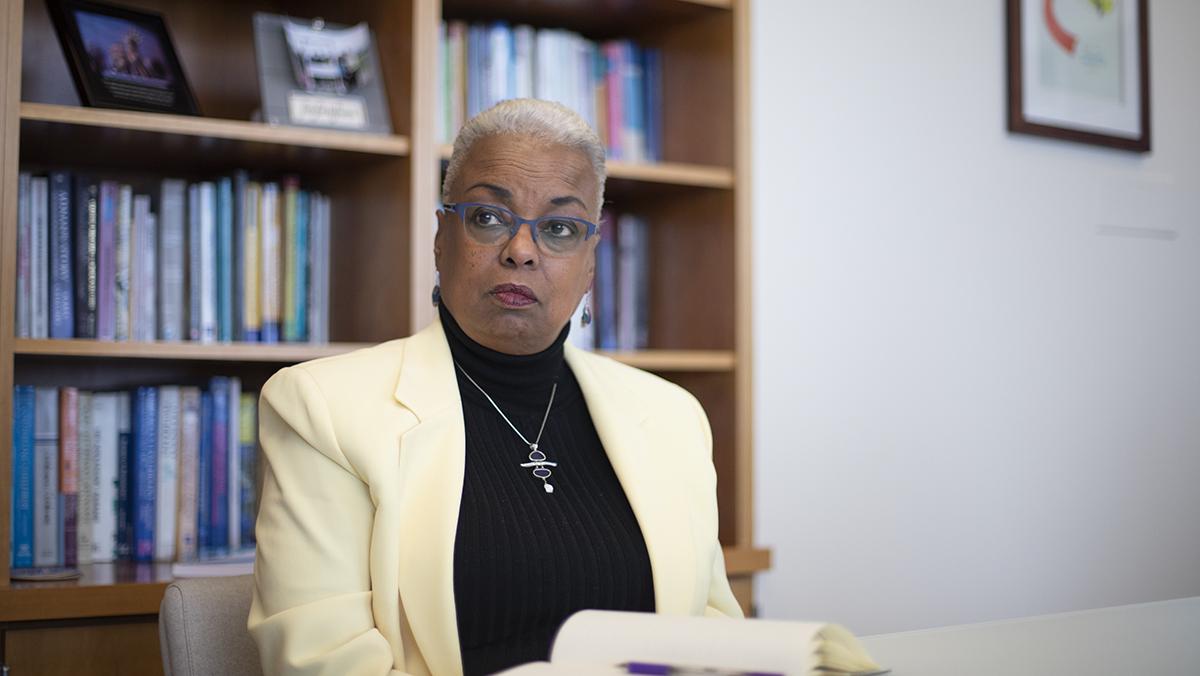 Ithaca College President La Jerne Cornish is now a quarter of the way through her first academic year as president. Cornish previously served as interim president for the 2021–22 academic year. She has also served as provost, executive vice president and senior vice president of academic affairs since she arrived at the college in 2018.

Editor-in-Chief Caitlin Holtzman and news editor Syd Pierre sat down with Cornish to discuss her goals as president and changes made in the college’s administration.

Caitlin Holtzman: What are some of your goals for this academic year and ongoing as president now that you’re in your first full year and no longer interim?

La Jerne Cornish: We have seven institutional priorities for this year. But the two overarching priorities are financial sustainability of the college, so developing a five-year sustainability model, and then number two, increasing student retention and success, leading to increased graduation rates. If we can do those two things, the college will be on a firm foundation to keep moving forward.

CH: As president, what are some of your values? What do you want to bring to this institution?

LJC: My three words, going back to when I was named interim president, have been and consistently are our intentionality, connection and care. Can we be intentional about all of the initiatives that we have moving forward? Can we make sure that we resource them properly? If we can’t resource them properly, then we shouldn’t say we’re going to do something that we can’t do. Connection. Can we connect with one another across the institution between and among the schools curricularly and co-curricularly? And then lastly, care. Can we be a community of care? I would love for us to get a feeling of being a family, because that’s what I believe. People thrive in families and so I want our students to thrive. I think if we can create that, that family atmosphere, it will benefit all of us.

CH: There’s been some administrative changes, including changing the Senior Leadership Team (SLT) to the President’s Cabinet. I was wondering if you could talk a bit about that. What spurred that change? Was it something that you had decided or someone else?

LJC: So, President’s Cabinet because it’s now inclusive of the deans. One of my frustrations when I was the provost was that I always had to translate to the dean’s what happened in the Senior Leadership Team meeting. And so the deans are leaders of the five schools, how wonderful would it be for them to be in the Cabinet meeting to bring forth the concerns, the issues, the great things happening in their schools themselves, as opposed to having the provost having to translate that, and then take it back. And so that was the reason from the SLT to the President’s Cabinet.

Syd Pierre: I know last fall we were in Phase Two of the [Academic Program Prioritization (APP) process]. Now, we have moved into Phase Three of that. What is that looking like?

LJC: We moved into Phase Three last year as well. So Phase One was alignment, Phase Two was restructure, reorganize, and we are right in the midst of restructuring and reorganizing. When you think about the curricular transformation work that’s going on that Provost [Melanie] Stein talked about in the State of the College the other day, that’s all a part of Phases Two and Three because they are concurrent.

SP: Like Caitlin talked about, there’s been some administrative rearranging. When do you think that you’d like to get to a point of more stability? There’s been some shifting around and new hiring and you’re starting the search for two new vice president positions.

LJC: So if you think about it, this is the first year of my presidency. And so last year, the focus was getting leadership at the school level. We now have five deans. No interim positions in the dean position. So our schools are tight. Now it’s time for me to get the rest of the cabinet positions in place as well. And so that’s the focus for this year. As you mentioned, there are two new searches that will begin Nov[ember] 1. Somebody asked about marketing and enrollment and what’s the difference between that and marketing and enrollment strategy. Why are we getting somebody for marketing and communications? The best way I can explain it is like this. Enrollment is a constituent of marketing and communications. So if you think about it, we’ve got enrollment, we need to communicate with and market to prospective students and families, current students and families, our alumni base, then there’s athletics, then there’s the institution at large and then there’s marketing of the five schools. So we need internal and external communication in all of those areas. And to me, it was important to have a vice president at the leadership table at the cabinet level to help us market and brand this institution across the board.

SP: I know you’re about to set off on the Inaugural Tour. What inspired that?

LJC: I want to hear the stories of our alumni. We have, not that I expect to meet with 67,000 alumni, but we have nearly 67,000 alumni and I want to be able to tell the stories about what’s happening here and I want to hear their stories as well. In my first three tour stops I heard amazing stories from alumni about how Ithaca changed their lives, but also I want our alumni to be our chief cheerleaders for this institution in their home area, so that they can help us recruit and retain students, but also so they can mentor our students as well. And so they can play a role in the day to day lives of our students. But I need to equip them with the knowledge of what’s happening here now, so that they can properly tell the story of Ithaca College.

CH: We saw that the college put out a statement regarding the Antiracism Institute and the recent attention it’s been getting in the media. I wanted to know if there was anything you’d like to expand on beyond the statement.

LJC: People misrepresent what’s happening here. And so the college wanted to put out a statement saying this is just a misrepresentation of the Antiracism Institute. This has been going on for three years and so affinity groups are not new anywhere. They foster a feeling of inclusivity, but they also foster conversation. I think the word ‘segregation’ was used in one of those … headlines and when I think of segregation I think of something being forced. When I think of congregation, I think of choice and so our faculty are choosing to congregate in affinity groups so that they can have richer conversations about race and racism and the impacts of that in America and even in Ithaca.

CH: You were talking a little bit about shifting, I’ve heard from various students … that they’re concerned about all the moving around and I think they might not think it’s normal even though it’s a new presidency. I was wondering if there’s anything you’d like to say to the student body regarding all the changes that they’re seeing emails about.

LJC: I want to say that’s normal. It’s a normal part of any presidency to have positions change. People come and go, people get promoted, they get to go to other areas where they choose to work. So this is normal. When I was a faculty member, I used to say all the time, administrators come and go but the faculty remain. I was at my previous institution for 20 years and served under four presidents and I can’t tell you how many vice presidents. So this is a part of the normal ebb and flow, if you will, of what happens when a school changes at the leadership level. No need to be concerned. We’re all good.