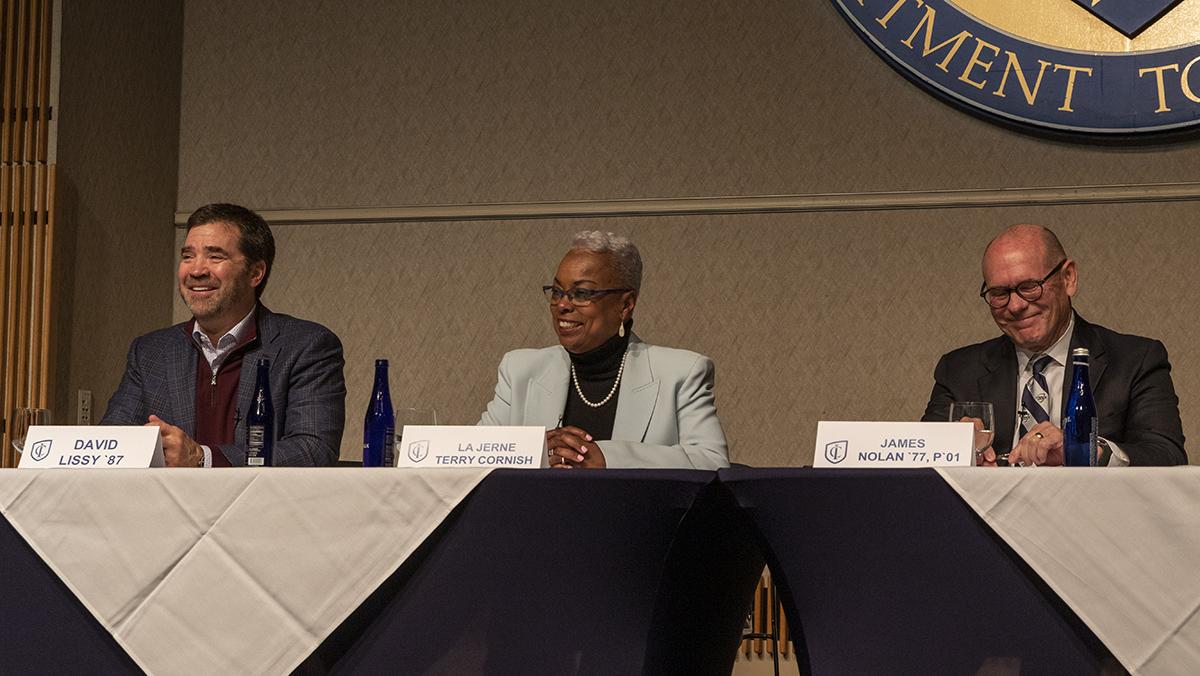 La Jerne Cornish, newly announced 10th president of Ithaca College, wept with joy as members of the college community celebrated her appointment as president at a presentation March 7 in the Emerson Suites.

“I’m shaking, I’m nervous, I’m crying, my heart is racing,” Cornish said. “I woke up and I saw the rain this morning, and I wasn’t sad. I was lit with sunshine. And in my head, … for me, the rain was from heaven. As my mother, and my father, and my brothers and my aunt … were crying with joy over seeing me be named to this position.”

Dave Lissy ’87, chair of the Ithaca College Board of Trustees, announced that the board unanimously voted to name Cornish as president. She had been serving as interim president since August 2021 after President Shirley M. Collado resigned from her position in July 2021. Cornish previously served as provost and executive vice president, and earlier as senior vice president of academic affairs, when she arrived at the college in 2018.

Jim Nolan ’77, vice chair of the board of trustees, commended the members of the search committee for the way that they conducted themselves throughout the search process: thoughtfully, deliberately and with integrity.

“This process, as with any process, had its challenges and there were differences of opinion, but those differences were always debated respectfully, which is exactly how we as an institution should handle ourselves in any occasion: respectfully,” Nolan said.

In response to the decision to partner with an executive search firm, the college’s chapter of the American Association of University Professors (AAUP) released a statement expressing concern about the lack of transparency regarding the decision to use a search firm, the fact that the board of trustees and the search committee rejected the AAUP’s call for shared governance, and that the decision was not declared open or closed.

In October 2021, representatives from Isaacson, Miller held open forums to receive feedback from the campus community about what they want to see in a new president, and in November, the presidential prospectus was released.

Fleischer said that Isaacson, Miller conducted outreach to about 300 prospective applicants, and the committee conducted full interviews with 10 semifinalists.

“Every candidate received serious and thorough consideration,” Fleischer said. “In the final analysis, Dr. Cornish rose above the rest. Her professional experience, leadership skills, personal qualities and demonstrated track record of persevering through difficult times elevated her above the other very accomplished candidates.”

Lissy spoke about how he thinks Cornish is the right candidate for the right time.

“She’s as clear-eyed about the challenges this place faces as she is excited about the many opportunities we have to reach our full potential,” Lissy said. “We think she’s the right leader at the right time because in my experience, great leaders have this uncanny combination of humility and drive. Getting that balance right can be really powerful. La Jerne is a humble person by nature, but don’t mistake that humbleness for a sense of inner drive to want to create lasting impact, to do the right thing.”

Lissy introduced Cornish as president, to which she received a standing ovation.

Senior Letícia Guibunda, vice president of campus affairs for the Student Governance Council and member of the Presidential Search Committee, said the college and world has gone through many changes during her time as a student, resulting in students having to chase after and establish new normals for themselves.

“Because of all of this, I’m really glad that IC will now have President Cornish as our next leader for the institution because she really recognizes and cares about all the things that students have had to deal with throughout the years,” Guibunda said. “She has really shown serious intention behind wanting to make this school a place where everyone can sincerely feel and have a sense of belonging and a sense of community.”

“We look forward under your direction and leadership, President Cornish, to the next best chapter of Ithaca College,” McNamara said.

Following the presentation, Cornish answered questions from the media.

Cornish also promised to sustain the freedom and independence of student media organizations on campus.

“Even if I get upset about what I read, I am committed to maintaining that independent student press,” Cornish said.