Recent studies link cellphone use to sleep problems in students 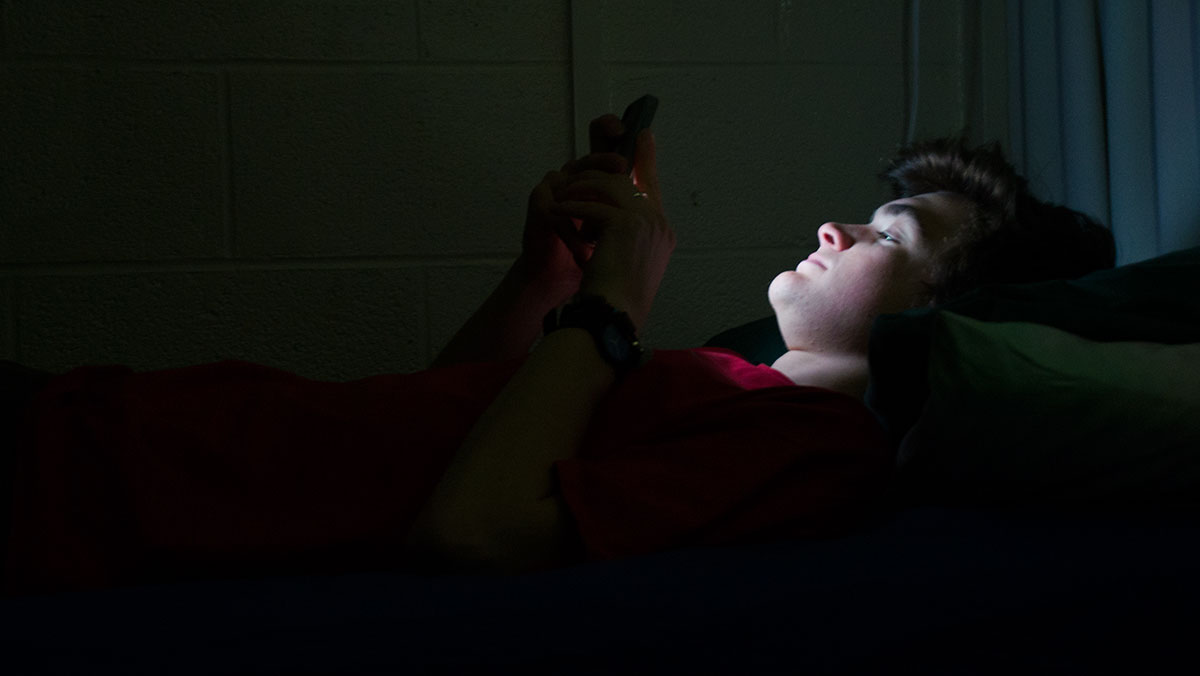 Photo illustration by Sam Fuller/The Ithacan
Ithaca College students said using cellphones is a part of a set bedtime routine. All 20 students interviewed said they were on their phones before bed for times ranging from 15 minutes to over an hour, affecting the quantity and quality of their sleep.
By Annie Estes — Contributing Writer
Published: March 30, 2016

Students at Ithaca College and nationwide say they face problems falling asleep and getting enough sleep. Coupled with recent studies on the issue, researchers are saying this could be due to the use of cellphones before bed, and companies like Apple are trying to find ways to change this.

Eighteen out of 20 Ithaca College students interviewed feel that their cellphone use before bed affects their quality and amount of sleep. Every student interviewed said they use their cellphones right before they go to bed and feel as if they are on their phone at night when they could be sleeping.

For many students, using cellphones is a part of a set bedtime routine. According to a 2012 Time magazine and Qualcomm online survey, more than 62 percent of adults ages 18–44 sleep with their phone within reach. All students interviewed said they were on their phones before bed for times ranging from 15 minutes to over an hour.

College students in the U.S. are also some of the most likely to suffer from sleep deprivation. According to a study performed at the University of Michigan in June 2014, 70 percent of students receive insufficient sleep, and 50 percent experience daytime sleepiness. The same study reports that this results in “lower grade point averages, increased risk of academic failure, compromised learning, impaired mood, and increased risk of motor vehicle accidents.”

Junior Meghan Chasse-Perry said she usually feels tired every day, and sometimes it affects her actions throughout the day.

“Your brain just tries to go on autopilot, and you start doing dumb stuff and forgetting small things,” Chasse-Perry said. “I’ve kind of autopiloted parking before and gotten out and been like, ‘I didn’t mean to park in three spaces!’”

A 1997 study at Stanford University determined that college students require eight or more hours of sleep per night to fully function. Over 80 percent of college students are “dangerously sleep deprived,” which is defined as “at high risk for some sort of accident involving unintended sleep or impaired performance.”

The factors of this sleep deprivation may be many, but cellphones and mobile devices contribute to the disruption of a good night’s sleep, according to research by Harvard Medical School.

A letter published in 2012 from “Harvard Health Publications” explains that the blue wavelengths emitted by most screens disrupts the body’s circadian rhythm. The blue light, which is received naturally in sunlight during the day, gives the body energy and alertness. During the night, however, it suppresses the hormone melatonin, which is an essential part of the circadian rhythm.

Using dim red light during the nighttime suppresses the least melatonin, according to Harvard Health. Apps are available such as Twilight for the Android and f.lux for computers to change the hue of the light emitted from devices so the blue light isn’t as prominent.

Apple is also working on a new addition to its iOS on upcoming products. Apple’s new Night Shift mode automatically shifts the color temperature of the iPhone as it gets dark outside, gradually filtering out the blue light. A representative from Apple, who could not be named due to company policy, said the feature, which was released in iOS 9.3, can also be manually adjusted to “more warm” or “less warm.”

“Say you’re reading at night, lying in bed. You can adjust the screen to a warmer color to help you fall asleep,” he said.

Ohio State University psychiatrist R. Ryan Patel, who authors a blog for college students called “Emotional Fitness,” has done previous research on the effects of cellphones on the sleep cycle. He said other methods rather other than using a phone at night could help students relax and fall asleep.

“Oftentimes, students might be using cellphones and multitasking, and might use cellphones as a way to relax, such as going online, social media and games,” Patel said. “It may be more effective to use relaxation techniques … or meditate … than to use cellphones.”

Freshman Casey McCracken said she scrolls through her phone in bed, as a way to “relax.” Although she does this mostly in the morning, McCracken said that lately, she has been trying to curb this habit and now uses the “snooze” feature on her phone to spend time meditating for a few minutes before getting ready to start the day.

“I was … waking up in a mood that wasn’t ready to start my day,” McCracken said. “Now I spend those nine minutes thinking about the day and … clearing my mind rather than scrolling through feeds that don’t benefit me anyway.”

Not only does the light exposure affect sleep cycles, but simply the distraction of having a cellphone within reach causes an increase in cognitive stimulation and a decrease in amount of sleep, according to a 2013 study from the Behavioral Sleep Medicine Journal. Almost all students interviewed said they would get more sleep without having the distraction of their phone before bed.

Senior Elise Steele said she keeps her phone near her bed every night and sometimes can’t control how much time she spends on it before falling asleep.

“Sometimes it sucks you in, like, I meant to go to bed 15 minutes ago, and here I am,” Steele said.

Similarly, freshman Oscar Mayer said his phone is a part of his bedtime routine, but it also draws him in before bed.

“I usually set my alarms, and then I end up on Facebook, and then I’m up for another hour,” Mayer said.

The sleep cycle disruption caused by cellphones can be avoided by placing cellphones and laptops out of reach during the night, according to the Journal of Clinical Sleep Medicine.

It also advises people to avoid screen time for at least an hour before bed.

Patel also said it is important to avoid looking at screens before going to sleep.

“The main thing is to try not to use your cellphone at bedtime,” Patel said. “It can elicit a variety of intense emotions, and that can affect your ability to fall asleep.”