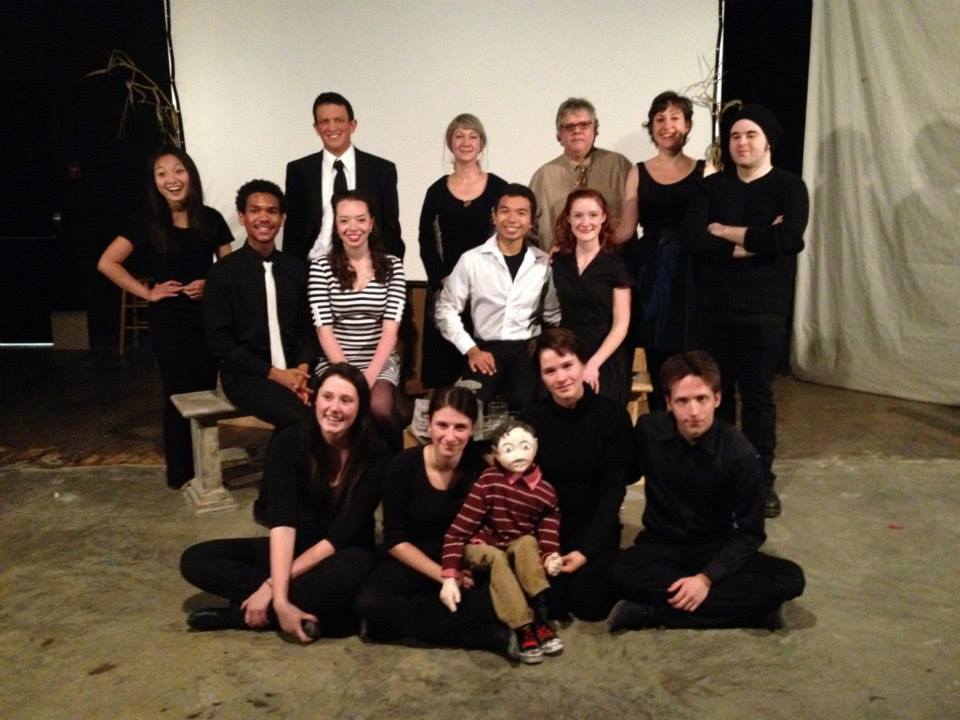 Courtesy of Dan Jones
The cast and crew of "It's a Good Life" performed a rendition of an "Insight" episode, led by Dan Jones '12, writer, director and designer, as a part of the Rod Serling Conference. The original episode was written by Serling.
By James Whitlow — Contributing Writer
Published: November 13, 2013

Although the conference is usually held at Ithaca’s main campus, the college decided to move the venue to LA to reach a wider audience on the West Coast. Melissa Gattine, marketing communications manager for the Roy H. Park School of Communications, said in an email that the conference was moved across the country to take advantage of the city’s resources and to expand to a different audience of Serling academics outside of Ithaca.

Serling was a television screenwriter and producer, most notably for the television show “The Twilight Zone.” He taught at the college from 1967 until his death in 1975, and the college is home to the Rod Serling Archives, a collection of television scripts, film screenplays, awards and other items, Gattine said.

Convening every two years, the Rod Serling Conference is a two-day celebration of Serling’s iconic work.

Stephen Tropiano, associate professor and director of the J.B. Pendleton Center in Los Angeles, said hosting the conference in LA made sense because many television and film companies are based on the West Coast, particularly in LA.

The keynote panel consisted of writer Earl Hamner Jr., director Richard Bare, actress Arlene Martel, who were involved in the “Twilight Zone” series. Producer Marc Zicree moderated the discussion. Gattine said having the conference in LA made this panel possible because the presenters were in closer proximity to the event and therefore more likely to attend.

Another workshop held at the conference was a short scriptwriting session. Filmmakers came to pay their respects to Serling’s work by screening their own films that were produced to emulate the dark style of “The Twilight Zone.” The films were evaluated by a panel of judges, including Serling’s widow, Carolyn Louise Serling.

At the conference, there was also a screening of “The Hate Syndrome,” a rare episode of the TV series called “Insight” that Serling wrote. The show was directed by March Daniels and aired from 1960–83. “The Hate Syndrome” was taken from the University of California-Los Angeles’ film archives, home to more of Serling’s work.

In addition to the conference’s proceedings in LA, there were two workshop performances of an episode of “The Twilight Zone” on The Commons.

A group of theater students, as well as several local actors, gave their rendition of an episode of “The Twilight Zone,” titled “It’s A Good Life,” using a life-sized puppet alongside real actors. Dan Jones ’12, writer, director and designer, said in an email interview that he has been a fan of the TV series his entire life.

Based on the 1953 short story of the same name by Jerome Bixby, “It’s A Good Life” is about Anthony, a 6-year-old boy who possesses godlike powers as he controls the small town of Peaksville, Ohio, using his supernatural abilities.

Jones said he wanted to do something different with this production of the iconic TV series.

“Approaching this project, I knew that it would be impossible to replicate the exact feel of that show,” he said. “Attempts to do so have failed time and again. What I tried to do instead was to translate what made the show memorable into a theatrical setting.”

“Anthony was the driving force of the show,” Muniz said. “Having to act with that made my job of being scared a lot easier.”

When asked what it was like working with a puppet, Muniz said Anthony perfectly complemented the disturbing style for which “The Twilight Zone” has become so well known.

“It was interesting to build a relationship with this puppet, so we kind of had to treat Anthony as if he were actually human,” Muniz said. “There was this weird, almost ceremonial quality that the puppet added to the production.”

Freshman Carolyn Trahan, one of Anthony’s puppeteers, said she wants to be involved with more shows like this.

“It was a little bizarre at first, and it was such a short process, but that almost made it more exciting because the pressure was really on,” she said.

“Our student performers were wonderful,” Jones said. “We were lucky to have such a cast.”