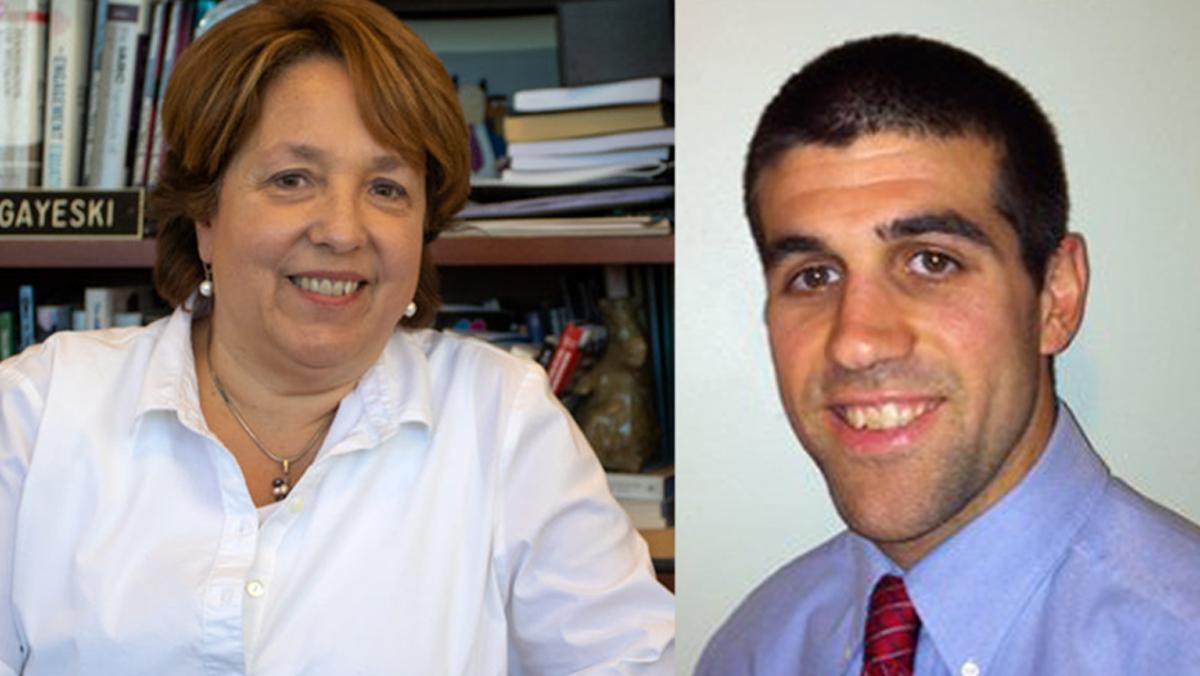 Maxine Hansford/The Ithacan and Courtesy of Ithaca College
Hosting the events were the two co-chairs of the selection committee, Diane Gayeski, dean of the Roy H. Park School of Communications, and Marc Israel, assistant provost of finance and administrative operations. Previously, the position was held by Brian Dickens from February 2016 to July 2018 and was formerly called the vice president of the Office of Human Resources.
By Sam Haut
Published: November 28, 2018

Leading up to the selection process for Ithaca College’s new vice president of the Office of Human and Organizational Development, Innovation and Planning, the search committee hosted two listening sessions to get community feedback.

Hosting the events were the two co-chairs of the selection committee, Diane Gayeski, dean of the Roy H. Park School of Communications, and Marc Israel, assistant provost of finance and administrative operations. Previously, the position was held by Brian Dickens from February 2016 to July 2018 and was formerly called the vice president of the Office of Human Resources.

The position of vice president of the Office of Human and Organizational Development, Innovation and Planning will replace the previous title as the job has new responsibilities. Gayeski said one of those jobs would be to oversee the college’s strategic plan. The strategic plan is a five-year plan that President Shirley M. Collado is implementing for the college, with the outline of the plan being established in Spring 2019.

Gayeski said the reason for the change in title is that the field of human resources is changing and that it now involves planning and development in addition to its previous responsibilities. Israel said the search committee does not know whether the search for the vice president will be open to the public or not, nor do they know when they will know if it will be open or not.

At the first listening session, which was hosted Nov. 27 and ended 15 minutes early, three staff members attended. Israel pointed out that one of the big goals of the meeting was to crowdsource questions from the community that the search committee can ask potential candidates in February, when they would be conducting interviews, Israel said. Israel said the search committee wants to know what the community wants to ask the incoming vice president to get a large opinion base of ideal parameters for candidates.

Luca Maurer, director of the Center for LGBT Education, Outreach and Services, said the new vice president should be able to address faculty members who are violating certain diversity goals of the college, such as respecting the pronoun and/or name preferences of people on campus.

“Sometimes it will come to my attention that a faculty person will refuse to call a student by the name that they use and the response to that is usually, “Oh, that faculty person needs more education,’” Maurer said. “That I think is partially true, and sometimes, that faculty will say right to me or to other people, ‘Yeah, I’m not going to do that. I refuse to do that.’ I can educate someone about all that stuff, and if they look me in the eye and say ‘I’m a tenured faculty, and I do as I please, and HR doesn’t tell me what I do with my classroom,’ then, to me, that is also an accountability piece.”

Gayeski said she wants the questions they ask the candidate concerning diversity to be more than a yes or no question on whether or not they support diversity. Instead, Gayeski said she hopes to address more specifically how candidates will promote the college’s diversity goals.

“We’re doing a number of faculty searches in [the] Park [School], and one of my search chairs said that his committee feels like the current statement that is the template that’s used on all faculty searches about our valuing diversity is not appropriate and seems like it’s tokenism,” Gayeski said. “I’m trying to dig deeper to see what in particular is causing that reaction.”

At the second listening session hosted Nov. 28, attendance was slightly higher — around nine staff and faculty members attended to ask questions. A question that arose was regarding the meaning of the new title and whether potential candidates will be able to handle the job’s responsibilities.

Beth Reynolds, controller for the Office of Business and Finance, said she was unclear on what many of the words in the title will mean.

“At this point, we don’t really know, I don’t think,” Israel said. “It hasn’t been discussed with us. I think it’s going to be up to this individual to set up what they think needs setting up. I don’t know if that means an AVP of HR [associate vice president of Human Resources] or what, but I think we want to be cautious because this isn’t just the VP of HR. It’s bigger; it’s more strategic than that; it’s not just functional. It was more of a functional position whereas this is more of a strategic position.”

During the meeting, the committee presented a leadership profile put together by the executive search firm Witt/Kieffer, which is helping the college pursue the search. The profile listed several responsibilities the new position will have, like promoting effective employee services and overseeing comprehensive employee initiatives and programs.

Sybil Conrad, director of Campus Center, said she appreciates the search committee hosting meeting sessions to give feedback on the new position.

“What I learned is that it’s not very flushed out at this point, but I know that this is a work in progress and it’s likely to get more specifically flushed out between now and when candidates are being interviewed,” Conrad said.

Vice president of Human Resources to step down July 31