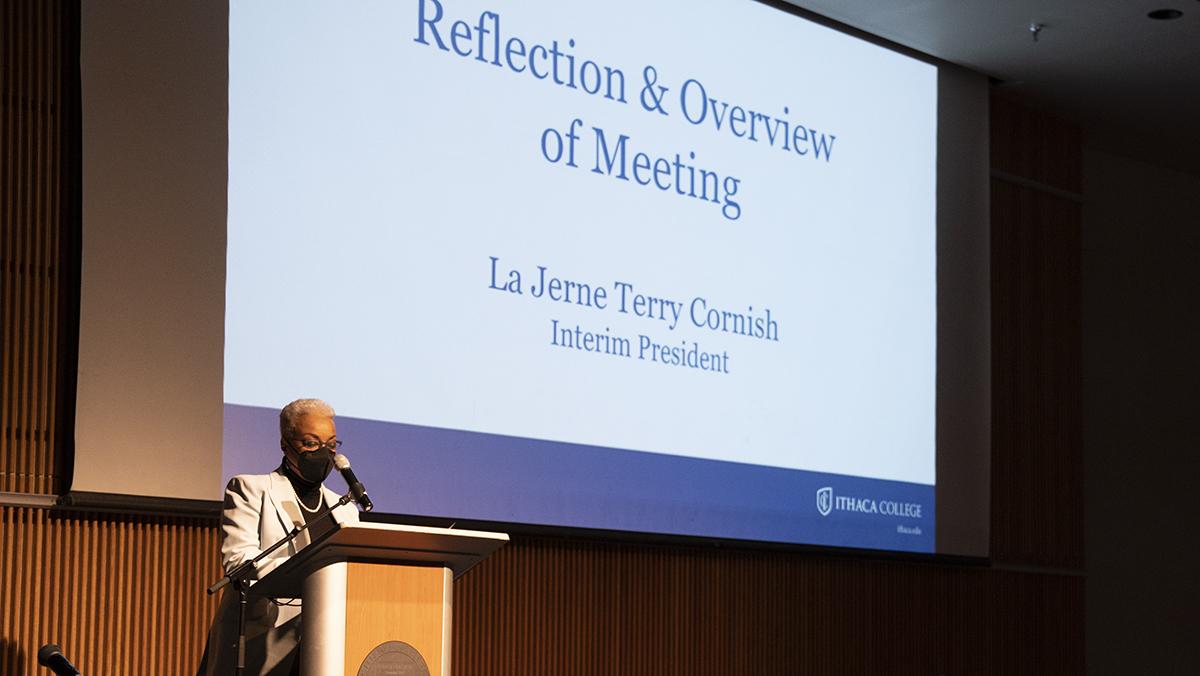 The Ithaca College Senior Leadership Team updated the college community on the college’s finances, enrollment, public health, student and academic affairs, human resources, and philanthropy at the All College Gathering on Feb. 1.

About 50 people attended the gathering at Emerson Suites and more joined through a livestream. Interim President La Jerne Cornish began the meeting by introducing the speakers and thanking faculty, staff and students for making the return to campus and in-person classes possible.

“I hope the presentations demonstrate the incredible amount of work we have done as a community to move this institution forward and to advance our strategic plan,” Cornish said. “We have accomplished a great deal since the beginning of this academic year.”

Laurie Koehler, vice president of Marketing and Enrollment Strategy, said the goals the division will be focusing on over the next year are impacting enrollment through recruitment, yield — which is the number of students who officially enrolled after being accepted — and retention, strengthening institutional reputation, raising awareness of the college’s unique qualities and enhancing alumni and donor engagement.

Koehler said the 2020–21 academic year yielded 11% of students, which is the number of students who officially enrolled after being accepted. Feb. 1 is the published deadline for undergraduates to submit a regular decision application to the college, but Koehler said that because of the impact of the COVID-19 pandemic on student application patterns, the college is likely to extend the deadline, although no final announcement has been made. She said she expects hundreds of more applications to come in after the February deadline like they did last year.

Tim Downs, chief financial officer and vice president for Finance Administration, said the 2021 fiscal year audit was slightly better than projected by about $4 million and he said the deficit was less than anticipated. Downs said that because students were not on campus, the room and board revenue was at the lowest it will likely ever be. He said the college lost over $40 million in room and board revenue but that the financial loss for that period was just over $6.4 million because of budget cuts, grants and donations. He said the main alternate revenue they received was from the Federal Emergency Management Agency (FEMA). Downs did not specify how much was received directly from FEMA.

“That is a testament to this community and what we were able to do to help kind of limit the impact of that significant COVID event that hit us,” Downs said.

From the 2013 fiscal year up until the 2020 fiscal year, Downs said each year the college averaged at about $6,600 in student enrollment, revenue was just over $240 million and expenses averaged at $227 million. He said while enrollment remained consistent, the college’s expenses began to increase, which is when the process of implementing the strategic plan began. However, he said that because of COVID-19, the financial impact hit the college much harder and faster than expected.

“The classes that we had during COVID and the year after which were below our normal enrollment numbers are going to stay with us through those [four-year] periods,” Downs said. “So we know the next three years we are going to have a deficit as well.”

Samm Swarts, assistant director of Emergency Preparedness and Response, said the check-in process for returning students was very successful. Swarts said that in December, the college predicted there would be a large number of positive COVID-19 cases when returning to campus for the spring semester but only 18 positive cases in the student body were reported.

“I’m very hopeful that with our low case numbers and all of the things that we have put into place for the spring semester, we will be able to get back to a green operating status,” Swarts said.

Dean of Students Bonnie Prunty said there will be a tuition insurance option being offered starting Fall 2022. In the instance that a student needs to take a leave of absence or withdraw because of a covered medical reason, tuition insurance can help refund fees like tuition and room and board.

Starting Feb. 1, the college launched its partnership with Sanvello, which is a health and wellness app that has evidence-based tools and strategies to help manage depression, anxiety and build resilience. The premium version of this app is available to everyone who logs in with an Ithaca College email.

Hayley Harris, vice president in the Office of Human Resources (HR), updated the campus on some of the division’s major projects.

A rehire policy was rolled out which allows for the restoration of some benefits when someone is rehired at the college who used to work at the college in the past.

Wendy Kobler, vice president of Philanthropy and Engagement, updated the campus community on the donations progress made for the 2022 fiscal year. She said so far, $795K of unrestricted funds have been raised towards the college’s $800k goal and the college also received a $1 million donation for the Physician Assistant Studies program.