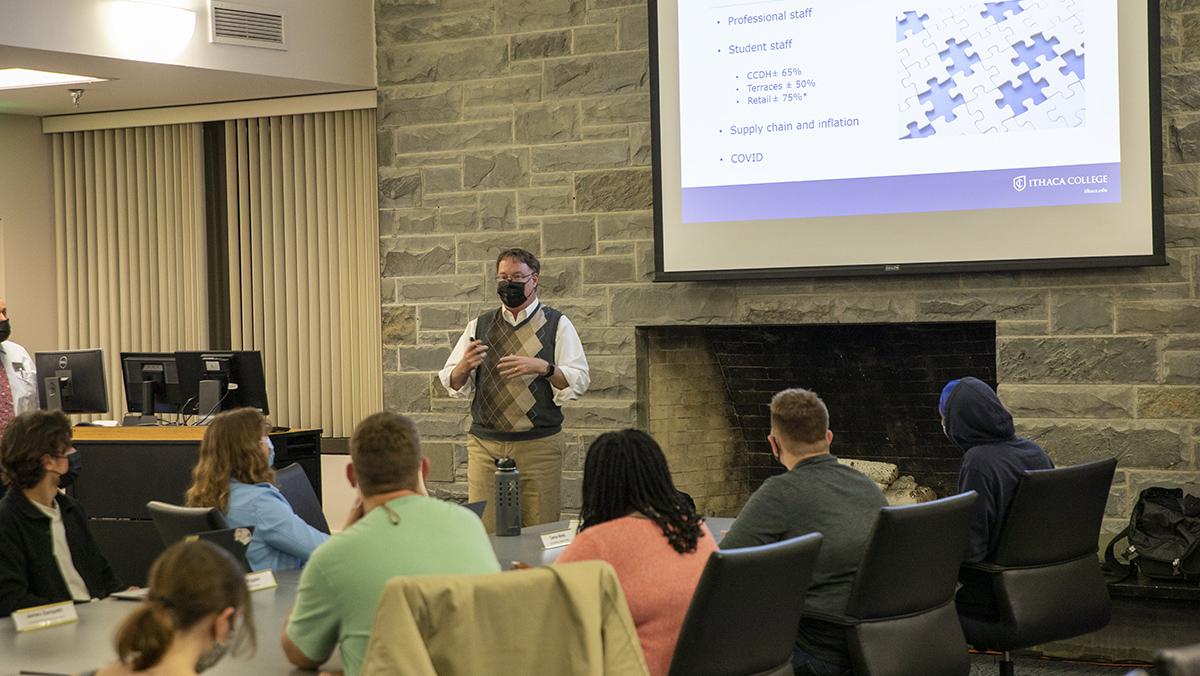 The Ithaca College Student Governance Council (SGC) met with representatives from dining services to discuss reopening plans for the spring semester at its Oct. 25 meeting.

Additionally, the SGC approved the Varsity Athletic Senator Position Clarification bill, and confirmed the position of vice president of Business and Finance to SGC and confirmed one member to the appropriations committee.

Prunty spoke about the ways in which the shutdown in Spring 2020, because of the COVID-19 pandemic, exacerbated the pre-existing issues with dining services.

When the college reopened in Spring 2021, Prunty said dining services had lost about 90 staff members. Currently, Prunty said 65% of the Campus Center Dining Hall employees, 50% of Terraces Dining Halls and 75% of retail dining is staffed by students.

Since the beginning of the fall semester, dining services has been able to reopen the Library Cafe, the Park Cafe, the Campus Center Express Cafe and the build your own and grill lines at the Campus Center Dining Hall. Prunty said that in the spring, dining services is working on reopening the Business Center Cafe, and is hoping to open Towers Marketplace seven nights a week.

Prunty said dining services are working with Dos Amigos, a restaurant in downtown Ithaca, to set up a food truck in Circle Apartments five nights a week.

“It’s badly designed, the kitchen is way too small, the lines cross in ridiculous ways,” Prunty said. “The food court’s too small. And our class schedule dumps everybody out at the exact same time, so there’s giant lines.”

Prunty told the SGC about a new website that includes nightly updates of the wait times in Campus Center and Terraces Dining Halls. He said dining hall services are working to set up a website to give estimated wait times for dining halls.

The current wait time data comes from the records of students swiping into dining halls. Prunty said student volunteers will start to collect data in the dining halls the week of Nov. 1 during the noon hour.

Prunty told the SGC that he wanted to emphasize the importance of students speaking to managers of the dining halls about concerns they may have.

“[We need you] to come and say, ‘This sucks. Do better,’” Prunty said. “That’s actually what we need from people.”

The SGC also approved the Varsity Athlete Senator Position Clarification bill with a vote of 9–0 with no abstentions.

The bill changes the SGC constitution to clarify the role of the varsity athlete senator position to align with the Student-Athlete Advisory Council (SAAC). This would mean that all candidates for the senator position would be internally selected by SAAC before proceeding through the normal SGC election procedures.

Those selected by SAAC would be the only ones eligible to run for the varsity athlete senator position whenever the seat is open. The bill was sponsored by the Organizational Review Committee and co-sponsored by Erienne Roberts, associate director of Intercollegiate Athletes, and junior Lauren Hitesman, varsity athlete senator on the SGC, who was recently elected to the position.

Powers was confirmed to the position with a vote of 9–0 with one abstention.

Powers said he has been a part of the appropriations committee  —  the committee responsible for allocating funding and reviewing budgets with student organizations —  since his freshman year and has previously served as assistant vice president of Business and Finance.

Junior Déontae Guy, president of the SGC, spoke about the board’s decision to promote Powers to the position.

“Everyone really felt that this was the best decision for us to continue on with Max,” Guy said. “[He’s been] very, very helpful for us in this.”

Junior Connor Watson, former SGC chief of staff, ran for a position on the appropriations committee. Watson was confirmed to the committee with a vote of 9–0 with no abstentions.

He said he wants to make the appropriations committee less daunting to members of student organizations.