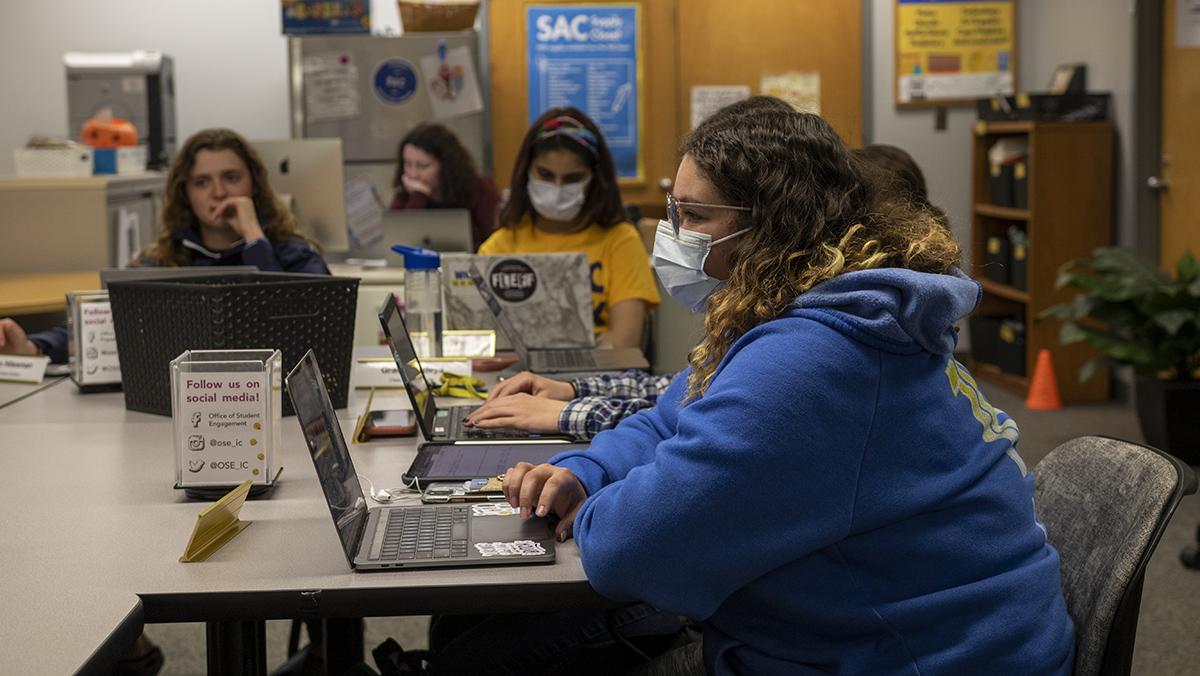 Brooke Vogel/The Ithacan
At its April 11 meeting, the Ithaca College Student Governance Council (SGC) passed its first bill of Spring 2022 in support of implementing at least one gender-neutral bathroom in every academic building on campus by the end of the 2022–23 academic year.
By Lorien Tyne — assistant News Editor
Published: April 13, 2022

At its April 11 meeting, the Ithaca College Student Governance Council (SGC) passed its first bill of Spring 2022 in support of implementing at least one gender-neutral bathroom in every academic building on campus by the end of the 2022–23 academic year.

The SGC motioned and voted to pass a recommendation for the Gender-Neutral Bathrooms in All Academic Buildings bill. There were no members opposed to the bill and seven members voted to pass it. Junior Tessa Kurtz, senator for the School of Health Sciences and Human Performance, has been working on this bill since Fall 2021 along with junior Lila Weiser, chief of staff; senior Maxwell Powers, vice president of business and finance; and Luca Maurer, interim executive director for Student Equity and Belonging and director for the LGBT Center. While some academic buildings have one or more gender-neutral bathrooms, there are currently none in the Center for Natural Sciences, Friends Hall and the Hill Center.

“We have found that a lot of students who generally would use a gender-neutral bathroom would need to use a bathroom either in the building that’s gendered or need to go to another academic building, which would either cause them to miss class or cause them to be uncomfortable,” Kurtz said. “This is an exclusivity issue. Every student should feel comfortable going to the bathroom wherever.”

The college received a five out of five rating on the Campus Pride Index as well as the Best of the Best LGBT!-Friendly listing.

The bill states that any building built by the college after the 2022–23 academic year will be required to have an all-gender bathroom. The bill recommends that two multi-stall restrooms in each academic building be converted into gender-inclusive restrooms. Each toilet and urinal should have floor-to-ceiling stalls and every bathroom should have a supply of menstrual products. The bill recommends that each building that does not already have a gender-neutral bathroom should create two by converting one currently designated “female” and one currently designated “male.” Proper signage is also required in the bill. According to the bill, proper signage includes either “all-gender restroom” or “gender-neutral restroom.”

“In regards to the bill, we’re saying that there’s at least one gender-neutral bathroom in every academic building, and considering it already has one, that would be something I need to talk to the administration about considering,” Kurtz said.

Sophomore Nick Viggiani, Class of 2024 senator, asked Kurtz what will happen in Friends Hall because the building only has one male and one female bathroom in total. If the bill is implemented as is, that would mean there would only be gender-neutral bathrooms in Friends Hall.

“I think that could lead to some issues if you just have two gender-neutral bathrooms,” Viggiani said.

Kurtz said she was unaware there were only two bathrooms in Friends Hall and that there would need to be discussion with facilities.

After the SGC passed the bill without opposition, sophomore James Zampetti, vice president of communications, said the college has hired a new director for the Office of Energy Management and Sustainability. Zampetti — who has been on the search committee — said he was unable to name who had been hired until the director officially assumes the position in June.

Minutes before the SGC went into an executive session, The Ithacan asked the SGC if it had discussed the claims made against Luvelle Brown for allegedly abusing his son and misusing his power as superintendent of the Ithaca City School District. Brown is also on the college’s Board of Trustees. Junior Senate Chair Austin Ruffino said there had not been conversations among SGC members in any official capacity.

“Not yet,” Zampetti said.

Due to the nature of executive sessions, The Ithacan cannot confirm if the SGC discussed Brown.

SGC discusses how to support MLK and first-gen students