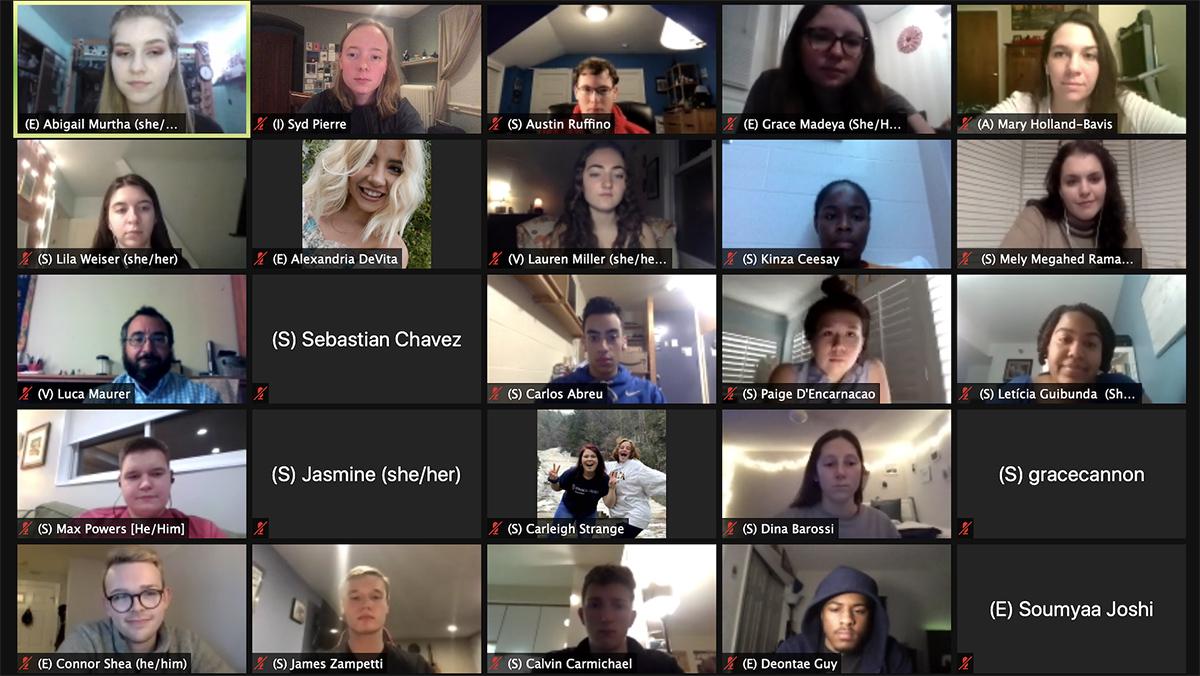 Courtesy of Student Governance Council
The SGC passed three bills — one creating a new committee for the SGC and two focusing on requirements for student organizations at the college.
By Syd Pierre — Staff Writer
Published: December 2, 2020

At its Nov. 30 meeting, the Ithaca College Student Governance Council (SGC) passed three bills — one creating a new committee for the SGC and two focusing on requirements for student organizations at the college.

The SGC passed the Social Justice and Sustainability Committee Amendment, creating a committee that focuses on the intersections between sustainability and social justice at the college. It also passed the Health and Safety Officer Requirement and Compliance to Health/Community Guidelines Amendment, which focuses on safety for on-campus events held by student organizations, and the Appropriations Two–Week Rule Resolution, which changes funding requirements for student organizations.

Junior Lauren Miller, a project coordinator for Eco Reps, said that there is currently no centralized group that combines social justice work and sustainability within the SGC.

Senior Yetunde Smalls, vice president of campus affairs for the SGC, asked how the committee would be distinct from Eco Reps and the SOCC.

Miller said that Eco Reps only has the power to educate the campus community and that the committee could help to encourage more environmental action on campus.

“This, certainly for an environmental justice perspective, would be essential in reaching that institutional change and kind of bridging these gaps and connecting the organizations,” Miller said.

The SGC also passed the Health and Safety Officer Requirement and Compliance to Health/Community Guidelines Amendment with a vote of 13–2.

The amendment requires all student organizations to have a health and safety officer and guarantee that their programming complies with the community health guidelines established by the Office of Student Engagement (OSE) and the college for in-person events.

Mary Holland-Bavis, associate director for student involvement for the OSE and adviser for the SGC, said that she had previously created the health and safety officer position for student organizations in July. She said she is now working with Christina Moylan, director of public health emergency preparedness, to create training that officers will have to attend if they want to hold on-campus events.

Senior Connor Shea, president of the SGC, asked about the sanctions that would be in place for student organizations if they broke community guidelines.

Holland-Bavis said she is chairing the events approval committee, which receives submissions from student organizations about events they plan to hold. She said that if the committee has concerns, it forwards the plan to Moylan, who provides further feedback. Holland-Bavis said that it would be up to the SGC to put its own repercussions in place for student organizations that do not comply with guidelines.

Sophomore Connor Watson, student liaison to the alumni board, said he works in the OSE and felt like the amendment was an encroachment on the OSE. Watson said he did not think the SGC should be providing repercussions for events that are already going through the OSE.

“It just seems like a lot of moving parts in two different bodies that have ownership over this,” Watson said.

Madeya said that the bill does not explicitly state any repercussions and that certain safety guidelines are already required for events. She said she thinks that putting the amendment in the handbook would be a good reminder for student organizations.

Watson said he had issues with the disconnect between OSE’s requirements and the amendment’s. He said OSE said that health and safety officers would be required until the 2021–22 academic year, but the amendment does not set an end date for the requirement.

Madeya said the Appropriations Committee will review the handbook at the end of the year and could change or remove the amendment if needed.

The SGC also unanimously passed the Appropriations Two–Week Rule Resolution with a vote of 15–0.

The bill amended Article VI, Section C, Subsection A, Sub-Subsection V in the SGC Allocations Handbook to state that programming budgets must be submitted at least two weeks prior to the date of the student organization’s event if its program relies on campus resources.

It was sponsored by Guibunda; Ruffino; and junior Maxwell Powers, senator–at–large. It was co-sponsored by Madeya, Sampat, Megahed Ramadan and Helsing.

The SGC also discussed options for reporting bias incidents with Luca Maurer, director of the Center for LGBT Education, Outreach and Services.

Maurer is a member of the Bias Impact Resource Team, which handles the Bias Impact Reporting Form. The form provides members of the college community a way of accessing resources if they experience or witness a bias incident on campus or virtually. The form is used to identify patterns of bias at the college but does not serve as a formal complaint.

He said he wants to make sure that members of the college community are aware of the options they have to report any issues they witness or experience.

“They range as simply as wanting to just have some face to talk it out with someone like me all the way up through filing a bias form or to filing a formal complaint,” Maurer said.

Maurer said that he thought the system for making formal complaints is not always clear to members of the campus community. Students have expressed frustration with a lack of clarity when it comes to the bias report form process.

“I think, personally, that the process to file a formal complaint should not only be described more clearly on the website, but the process itself should be streamlined,” Maurer said. “I think maybe one of the ways you all could be useful, if you’re interested in it, is pushing for systems that better serve you.”

SGC discusses sustainability at the college