SGC discusses sustainability at the college 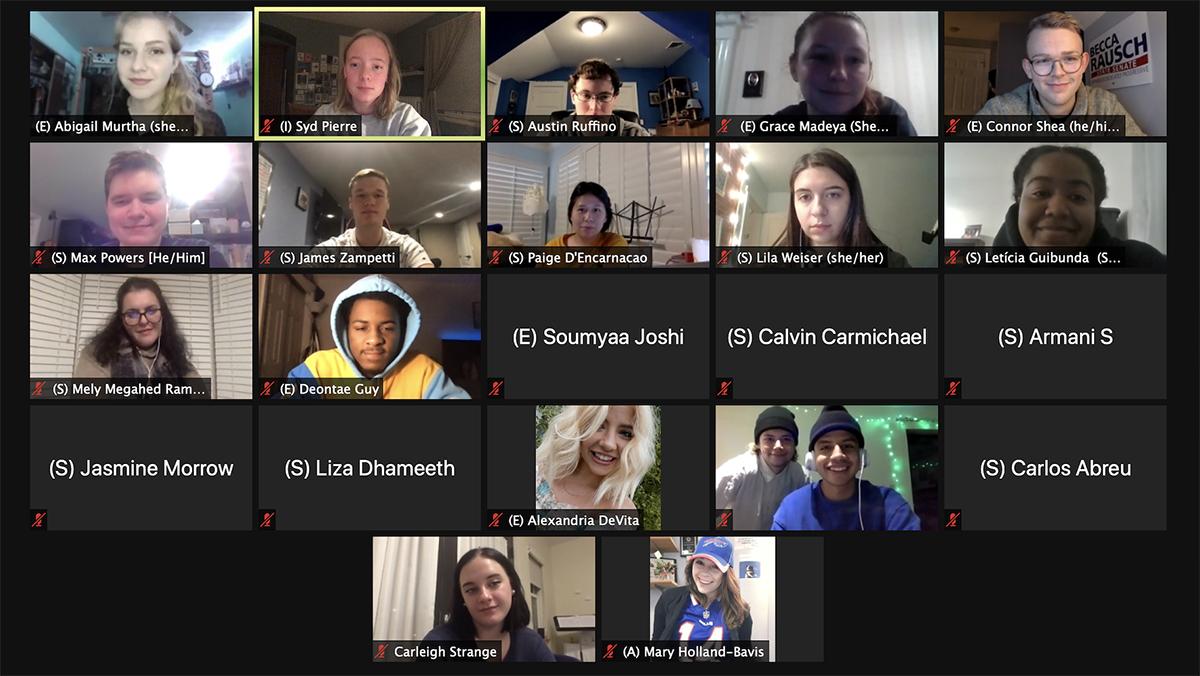 Courtesy of Student Governance Council
Rebecca Evans, campus sustainability coordinator for the Office of Energy Management and Sustainability, and junior Lauren Miller, project coordinator for Eco Reps, met with the SGC and spoke about the importance of student involvement with sustainability at the college.
By Syd Pierre — Staff Writer
Published: November 4, 2020

The Ithaca College Student Governance Council met with speakers from the Office of Energy Management and Sustainability and Eco Reps to discuss sustainability at the college at its Nov. 2 meeting.

Evans spoke about the college’s goal to be carbon neutral by 2050, a goal that recently reached the halfway marker in 2019, six years ahead of schedule. The goal is set for 2050, but the college’s Climate Action Plan Reassessment Team has proposed changing the date to 2030.

In 2018, the college transitioned to using all clean energy for its electricity supply.

Evans said students can provide positive environmental impacts by making sustainable choices in their daily lives but stressed that there are other areas in the sustainability dialogue that students can be involved in.

She said climate change is not a people problem but rather a world culture problem.

“I don’t expect all of you to start turning off your lights and then we’ve solved climate change, right?” Evans said. “The college going carbon neutral is not going to solve climate change, either. This is a much much bigger problem. This is a values problem. This is a whole world culture problem. And that’s where the empowerment piece comes in. We want to challenge our politicians. We want to challenge fossil fuel companies. We really want to shake things up.”

Climate change has severe long-term effects on both environmental and societal systems. According to NASA, future effects include rising temperatures and changes in weather patterns like precipitation, droughts and more intense hurricanes and rising sea levels.

In 2017, the college joined We Are Still In, “a statement on behalf of governors, mayors, CEOs and college and university leaders declaring that, despite the federal government’s decision to withdraw from the Paris Agreement, the nation remains committed to climate action.”

Climate change has become a rising topic of conversation amid the 2020 election. One of Democratic presidential nominee Joe Biden’s priorities regarding climate change is to push the U.S. toward net-zero carbon emissions by 2050. Biden also plans to invest $2 trillion into a clean energy economy. President Donald Trump has said his priorities are ensuring clean air and water, recently signing an executive order centered on modernizing water resources in the U.S. However, under Trump’s administration, there have been over 100 reversals regarding environmental regulations.

Miller said her goal as an Eco Rep is to connect the community at the college with the town of Ithaca and Tompkins County.

“I see the power of Eco Reps as maybe a unique avenue for that change on campus, and it’s given me, personally, a lot of really incredible opportunities in my activism with other organizations partnering with things in the community,” Miller said. “Also, just being an active member on our campus as well and engaging with different forms of sustainability programming and also equity in more broad political goals of our institution.”

When asked by sophomore Lila Weiser, senator-at-large, if the college is still investing in fossil fuels, Evans said that she was not sure of the exact percentage but that it was still investing a small amount. She estimated it to be approximately 1%.

On average, between 2% and 5% of all assets controlled by university endowments and public funds are invested in fossil fuels, according to a study in the New York University Journal of Law and Business.

“There are a lot of stipulations when we actually make those investments, so it doesn’t necessarily mean that we are directly investing in a company that invests in fossil fuels, but that portfolio could include fossil fuel companies,” Evans said.”The way that we invest our money, we pick a portfolio, not necessarily those companies, so it’s complicated.”

Previous reporting from The Ithacan found that the college invested 2.1% of its endowment into fossil fuels in 2017 — approximately $5,670,000 of the $270 million endowment. There have been numerous calls from students for the college to divest from fossil fuels.

Miller said that creating the strongest change in the community includes involving both the community on campus at the college and in the greater Ithaca area in general.

“All of the institution’s goals can be fantastic,” Miller said. “But if we’re not having direct communication and direct involvement with the city, … it seems kind of pointless to me because we are all operating together [and] we will all be affected by the decisions.”

The Green New Deal, a proposal passed by the City of Ithaca in 2019, calls for the city to be carbon neutral by 2030, 100% of government operations to use renewable electricity by 2025 and for the city to create a climate action plan.

Evans said that the deal happened in part because of students from the college, who were a part of Eco Reps.

“It’s this domino effect, and it all started with a group of five college students who are also all Eco Reps and got a bunch of friends together to make this happen,” Evans said. “So you guys have so much more political power … than you think you do.”

In 2019, the Eco Reps also organized student involvement in the Ithaca chapter of the Global Climate Strike.

Miller said that the COVID-19 pandemic has made it harder for students to engage within the community but encouraged students to reach out to find connections.