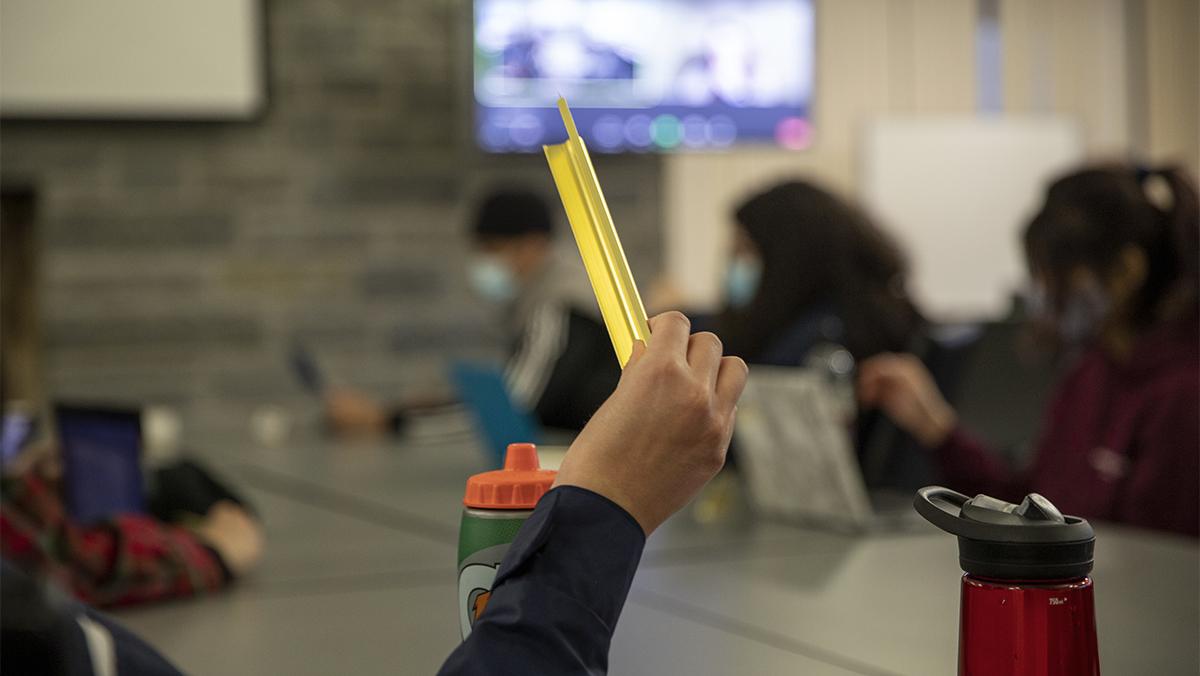 Nolan Saunders/The Ithacan
The SGC appoints junior Lila Weiser to chief of staff and junior Austin Ruffino was the only candidate who said he is interested in being senate chair. Ruffino held the position of senate chair for the 2021–22 academic year. Both of these positions are separate from the SGC elections because they are internally appointed by the elected senate and executive board.
By Lorien Tyne — Assistant News Editor
Published: May 4, 2022

During Spring 2022, the Ithaca College Student Governance Council (SGC) passed just one bill, but at its May 2 meeting, discussed its goals for Fall 2022, which do not center around bills.

The SGC appointed junior Lila Weiser to chief of staff and junior Austin Ruffino was the only candidate who said he is interested in being senate chair. Ruffino held the position of senate chair for the 2021–22 academic year. Both of these positions are separate from the SGC elections because they are internally appointed by the elected senate and executive board. As part of the internal election, Ruffino answered questions about student engagement and the quantity of bills passed in Spring 2022.

The Ithacan asked Ruffino why the SGC passed so many fewer bills than the year before and what he would like to do to increase productivity.

“The main thing I would attribute [fewer bills] to is focusing on still doing work but recognizing that bills aren’t always the most effective way to do that,” Ruffino said. “So, if you take a look at the bills we passed last year — half of which I wrote — most of them were just like tiny little amendments and little bills that we would send off and then whoever we sent it to, would say no, and then that would kind of be the end of it.”

In the 2020–21 academic year, the SGC passed 45 bills. The SGC passed four bills during Fall 2021, two of which were during former President junior Deontae Guy’s time in office. Guy was elected to serve throughout the 2021-22 academic year but resigned from the position in November 2021. Afterward, SGC decided to leave the position of president unfilled and to delegate the president’s responsibilities instead. So far this spring semester the SGC has passed one bill, called the All-Gender Bathroom Bill, which proposes adding at least one gender-neutral bathroom in all academic buildings.

Ruffino said because bills are so often passed over by the college, the SGC has been focusing on building relationships with campus partners.

“Asking for things becomes a lot easier rather than reading a big scary bill like we’re trying to attack someone,” Ruffino said. “Those are things that don’t need bills but have the potential to make a lot more positive change. So I’m less focused on the number of bills and specifically what those bills are doing.”

During the spring semester, the SGC hosted one or two staff and faculty members to speak at each of its weekly meetings to build partnerships. The executive board and senate would use the meeting as an opportunity to ask questions toward the guests’ area of responsibility at the college and discuss how the SGC could provide support.

Sophomore James Zampetti, vice president of communications, asked Ruffino how he plans to improve student engagement. During Spring 2022, eight of 25 senator positions were filled and so far just seven senators have assumed their positions for the 2022–23 academic year.

“​​I think it’s no secret that senator engagement was a bit low last semester and we didn’t have much retention,” Zampetti said. “How do you plan to shift that to kind of increase membership?”

Ruffino said one way he already worked to make the SGC more accessible to students is by increasing flexibility for senators with committee requirements. All senators were required to be on two committees, but because some had larger time commitments than others, Ruffino said the requirement was changed to be more based on overall engagement.

“If you don’t have enough people, they get overworked so they have to leave [SGC] and then that’s sort of a cycle and it’s very hard to break,” Ruffino said. “We just want to make sure we are giving each individual senator the freedom to serve their community as they think is best fit.”

President junior Grace Madeya said she is looking forward to beginning Fall 2022 with the new group of SGC members.

“I know IC United is really looking forward to focusing on strengthening our community, getting more communication, being more visible with students and really improving academic accessibility on campus,” Madeya said.