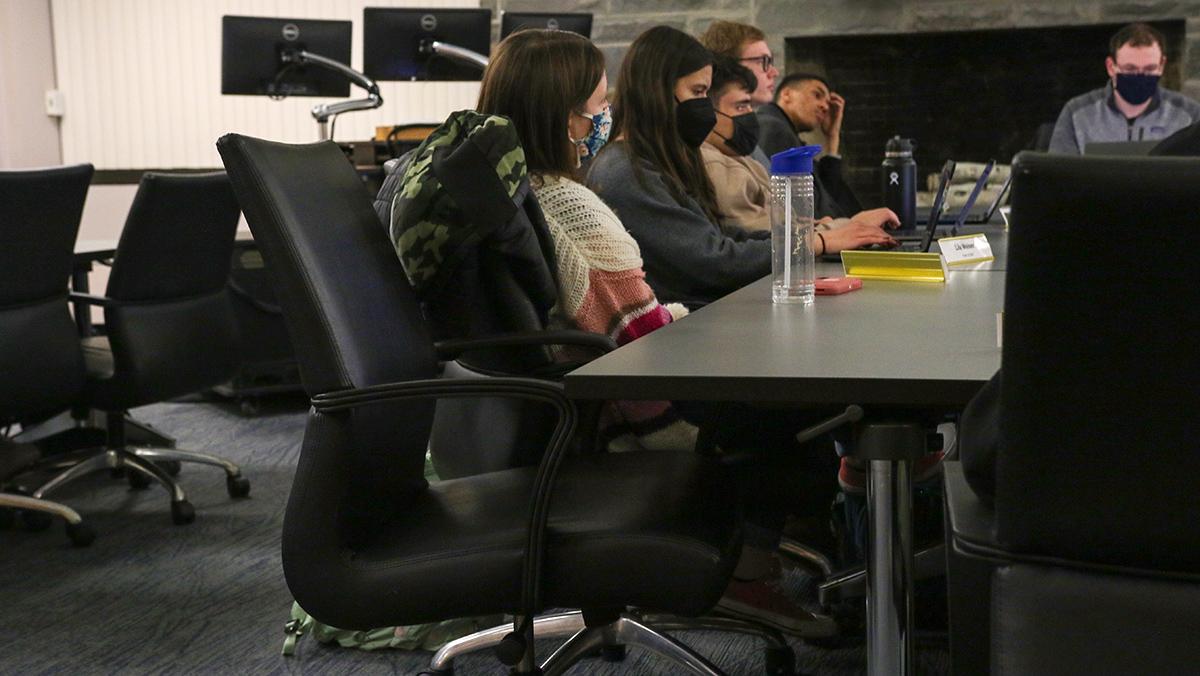 Maggie Bryan/The Ithacan
Since junior Déontea Guy, former SGC president, resigned in November 2021, members of SGC have had to distribute the responsibilities of the president among themselves.
By Jadyn Davis — Staff Writer
Published: March 23, 2022

The Ithaca College Student Governance Council (SGC) has decided to leave the position of president unfilled and to instead distribute the president’s responsibilities among the executive board members following junior Deontae Guy’s resignation from the position in November 2021.

Sophomore James Zampetti, vice president for communications, said the reason the SGC will not replace the role of the president for the rest of the academic year is that elections will start in April and replacing the president will present even more challenges.

“We felt, as an e–board, that replacing the president would not be the best thing for the organization,” Zampetti said. “There are a lot of implications for doing so, the most notable being the fact that replacing the president would mean that there would be another vacant spot on our e–board. The president, aside from filling roles, is also a manager for the executive board … and we felt that we can do that job just fine ourselves.”

“I focus on campus affairs and kind of like campus policies and those issues,” Guibunda said. “I’m just adding that onto the work that I was previously doing for my role [vice president].”

Zampetti said he is proud of the work the executive board has done because each member is assuming a different portion of the role of the president.

“We’re working effectively as a team,” Zampetti said. “I think that, while the initial resignation of our president was a hurdle, it’s brought us closer together as an e–board and as an organization altogether.”

Guibunda said this will be her last semester at the college and is grateful for the amount of change she has been able to implement during her time on the SGC. She said she hopes the next president will be passionate about serving students first.

Freshman Paloma La Valley was a Class of 2025 senator during Fall 2021. She said the reason behind her resignation was due to the intense workload between the SGC and her involvement with the Ithaca College-Cornell University Exchange Program. However, La Valley said her resignation would be temporary.

La Valley said everyone on the SGC is incredibly motivated and experienced individuals who know what they are doing. She said the lack of presidential leadership did not hinder the SGC’s normal operations.

“I hope for this semester that students can at least acknowledge what SGC is doing to serve their community,” La Valley said. “They’re putting a lot of extracurricular hours into a position that isn’t even paid. The only way that they’re being compensated is by the satisfaction of their community at large and I hope that, at least for this election, more students appreciate it.”

During the Fall 2021 semester, the SGC experienced a decreased amount of student engagement and, in turn, passed fewer bills in comparison to previous semesters.

Only two bills were passed during Guy’s time as president. The Employee Vaccination bill, which recommended that the college make it a requirement for employees to be fully vaccinated against COVID-19, was passed in September 2021. The college did not act on the recommendation. The Varsity Athlete Senator Position Clarification, which clarified procedures for the SGC Varsity Athlete senator process to align with that of the Student-Athlete Advisory Council, was passed in October 2021.  The SGC passed four bills overall during Fall 2021.

Junior politics major Reilly Shingler said she has been following the SGC since Spring 2020 because she thinks it is an important part of campus life. She found out about Guy’s resignation when it was announced on the SGC Instagram and feels that the SGC is doing its best to compensate for the lack of presidential leadership. She hopes the next president is able to not only listen to students but administration as well.

“I’m looking for somebody who has a lot of people skills and who is good at bridging the gap between students and administration,” Shingler said. “I know it is a tricky place to be in because I know that oftentimes students’ voices are the ones often focused on, but I think administration has an important say as well.”