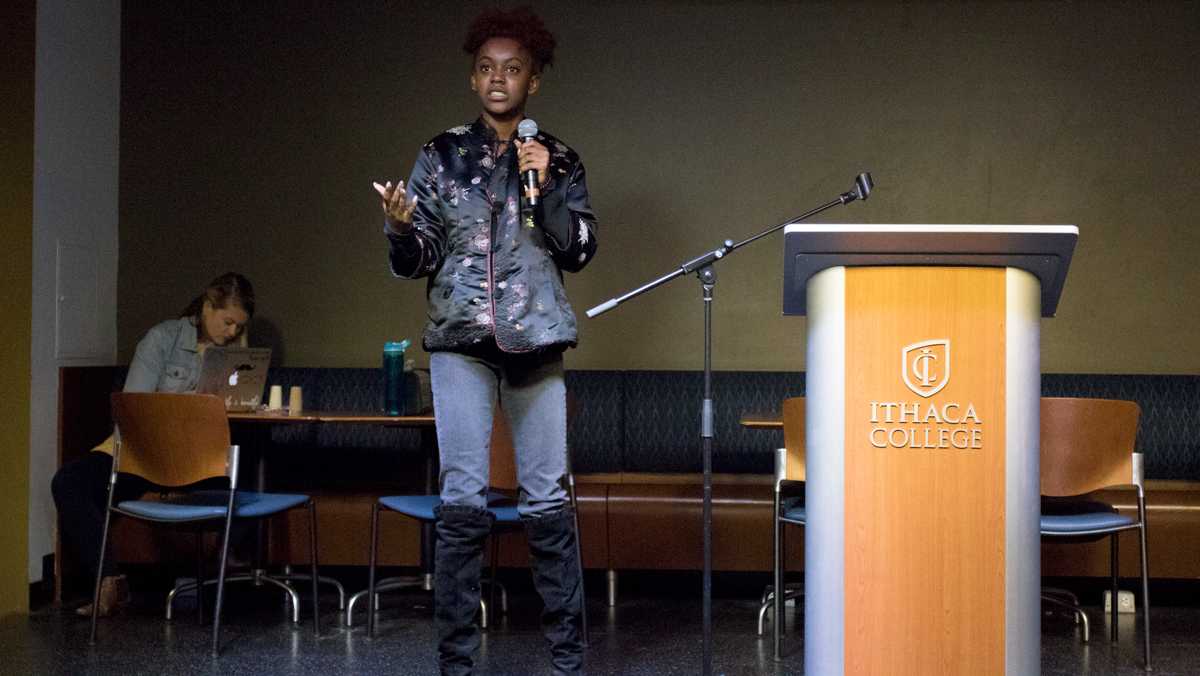 Ryan King/The Ithacan
Junior Woizero Jarvis presents her speech for the Senator-at-large position. Jarvis discussed how she feels that there is a lack of a support system for freshman and how the first-year experience needs to be improved for future incoming students.
By Ryan King — Staff Writer
Published: September 13, 2017

Ithaca College’s Student Governance Council held a platform event Sept. 11 for senate candidates to make their case to the student body. The fall elections are taking place on OrgSync from Sept. 14 to 15.

Over the course of the hourlong event, 14 students running for senate positions gave speeches or had prepared statements read for them about why they should be elected to the SGC Senate.

Senate Chair Farwa Shakel, who is in charge of fall elections, read speeches for students who were unable to attend the event. She said she was very impressed with the turnout of both candidates and onlookers.

“We have a large pool of candidates, which means that we can put some of these people that are not elected onto committees,” she said.

The event kicked off with the competitive race for Class of 2021 senator. Freshmen Allison Kelley, Elijah Nishiura, Jackson Rynar and Amber Gooden are all running for two available seats. Gooden talked about how she wanted to represent underrepresented people on campus and work to combat microaggressions. Kelley talked about looking for ways to help freshmen feel more welcomed on campus. Nishiura discussed sustainability ideas, such as adding more compost bins around campus. Finally, Rynar talked about how much he loved the school and how he wanted to be involved on campus.

Senior Jake Barney is running unopposed for one of the two available Class of 2018 senate positions. He spoke about his goal of putting pressure on the administration and Ithaca College Board of Trustees to divest from fossil fuels.

Junior Joe Cruz is running unopposed for one of the two Class of 2019 positions. He talked about how he wants the campus to be more tolerant and how he wants to strengthen the community between students at the college and the Ithaca community.

The candidates running for the Park School senate seat came next. Sophomore Devin Kasparian talked about how he wants to improve alumni networking at the school. Shakeel read a speech from his opponent, sophomore Kristen Mirand, who was unable to make the event. Mirand wants to propose new networking initiatives.

Sophomore Hunter Flamm, who is running unopposed for the School of Humanities and Sciences senate position, talked about how he wanted to better advertise the H&S school to other students.

Junior Alisar Awwad is running unopposed for the international senate position and talked about how she wants to continue Isabella Grullon Paz’s work of pushing back against the Trump administration’s policies.

Shakeel returned to the stage again to read remarks from senior Charlotte Robertson, who is running unopposed for the off-campus senate position. Robertson’s speech was about how she wanted to improve campus safety and work with Cornell University to better cross-campus efforts that address sexual assault.

Lastly, freshman Hande Erkan and junior Woizero Jarvis gave speeches for the senator-at-large position, which has one opening. Erkan talked about how she wants to work to improve class registration and housing selection. Jarvis discussed how she felt that there was a lack of a support system for freshmen and how the first-year experience needs to be improved for future incoming students.

Throughout the event, senior Conor Friend, vice president of business and finance, asked the candidates questions.

“I want to make sure that everyone is prepared for what they might experience in SGC,” he said. “I think last year, a lot of senators were caught off guard with the honesty of the questions that might have come out of sessions last year.”

Sophomore Kevin Swan, who was not seeking a position, attended the event and said that he was interested in some of the ideas the candidates presented.

“It was exciting to see so many individuals that were really passionate about the topics they were talking about,” he said.