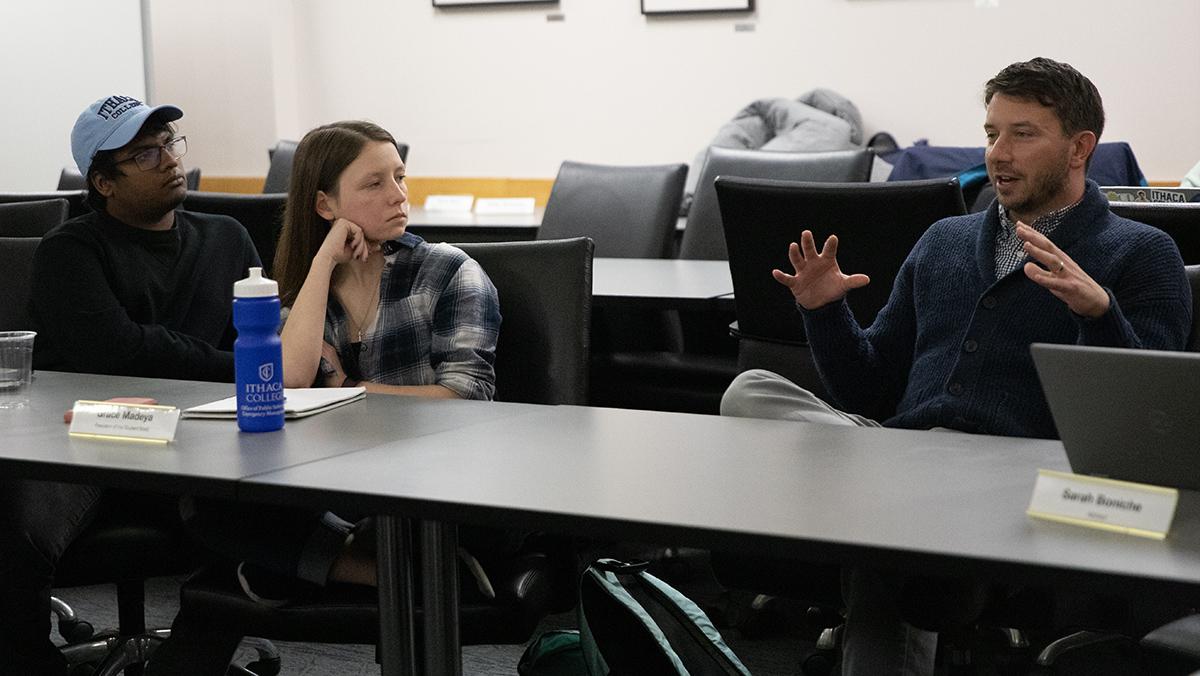 The meeting began with Dave Harker, director for the Center for Civic Engagement, who gave a presentation on his role on campus and his future goals. Harker said his job is to help students, faculty and staff at the college engage with the local community through supporting and developing direct programs with students and faculty.

Harker said he works to integrate these programs into classes and works with student organizations to involve the campus with the community. Nia Nunn, associate professor in the Department of Education, who organizes this type of programming, works with the Southside Community Center and is able to connect students to service opportunities at the center.

“All of the conversations I’m having right now are about the opportunities that we have in rebuilding our community programs at [the college] and making sure that they’re better connected,” Harker said.

“What we do a really bad job of is capturing [experiential learning] and sharing it back out with folks or sharing out what that looks like on a day-to-day basis with prospective students or current students or alumni who are interested in what is going on,” Harker said.

The second guest presentation was from Elizabeth Bleicher, dean for the Center of Student Success and Retention, and Benjamin Costello ’97, executive director for the Office of Constituent Engagement Strategy.

Bleicher said she began campaigning for a Student Success Dashboard in 2016 before moving into development in 2019. The dashboard — which Costello worked to develop — is currently in the process of beta testing among 80 members of faculty, staff and administration. When the dashboard is ready for full use, there will be required student privacy training before users can gain access.

The dashboard was created as a resource for college employees to understand a student’s status, including GPA, credit hours, if a student is first-generation, academic holds, scholarship information, tutoring history and involvement in student organizations, among other details.

“It’s a simple view of a lot of stuff that comes from a lot of other places,” Costello said. “Instead of having to go to eight systems, you can go to one page and it’s all there.”

Costello said it was important to value students’ privacy by programming the dashboard to only share a certain level of information about a student based on a faculty member’s relationship with the student. For example, a student’s academic adviser has more information visible on the dashboard than a student’s professor from an elective course.

“Part of what we wanted to do was make a place where we could give each other information in order to support you so that you’re having a better experience,” Bleicher said.

Sophomore Noah Richardson, Class of 2025 senator, said he believes Bleicher should consider students of color when contemplating retention rates at the college. He said he knows students who have transferred to a different school because they felt out of place at a predominantly white institution. Data from the Office of Analytics and Institutional Research, shows that in Fall 2022 just 23.2% of students at the college are Black, Indigenous and people of color.

Bleicher said having a centralized network of student information — like the Student Success Dashboard — can display student patterns in ways that faculty may be unable to see working on their own.

“There are things that can happen to students that we are unaware of that can make it hard to be successful, so we’re looking for hidden things,” Bleicher said.

Between guest speaker presentations, senior Maya Scriven, senator-at-large, was confirmed by the senate as the new vice president of communications for the SGC.

“A lot of what I want to do is bring SGC to classrooms,” Scriven said. “I know a lot of people I talk to about SGC … don’t know what we do exactly.”

Throughout the meeting, the SGC discussed a bill sponsored by senior Grace Madeya, president of the student body, and first-year student senators-at-large Matt Williams and Caleb Cackowski. The bill, 2223-0001: Code of Conduct Amendment, was written to add a code of conduct to the SGC constitution so there are clear and enforced expectations for meeting behavior.

“This year, I decided to bring [the bill forward] as president because I really hope that this can be a foundation for future generations of SGC when we’re all gone, that we are maintaining a respectful environment,” Madeya said.

Richardson made a motion to table the bill for further discussion at the next SGC meeting and to adjourn, which the senate passed unanimously.

Editor’s note: A previous version of this articled stated that just 15.1% of students at the college are Black, Indigenous and people of color. That number is actually 23.2%.