Small businesses flee as big construction returns to The Commons 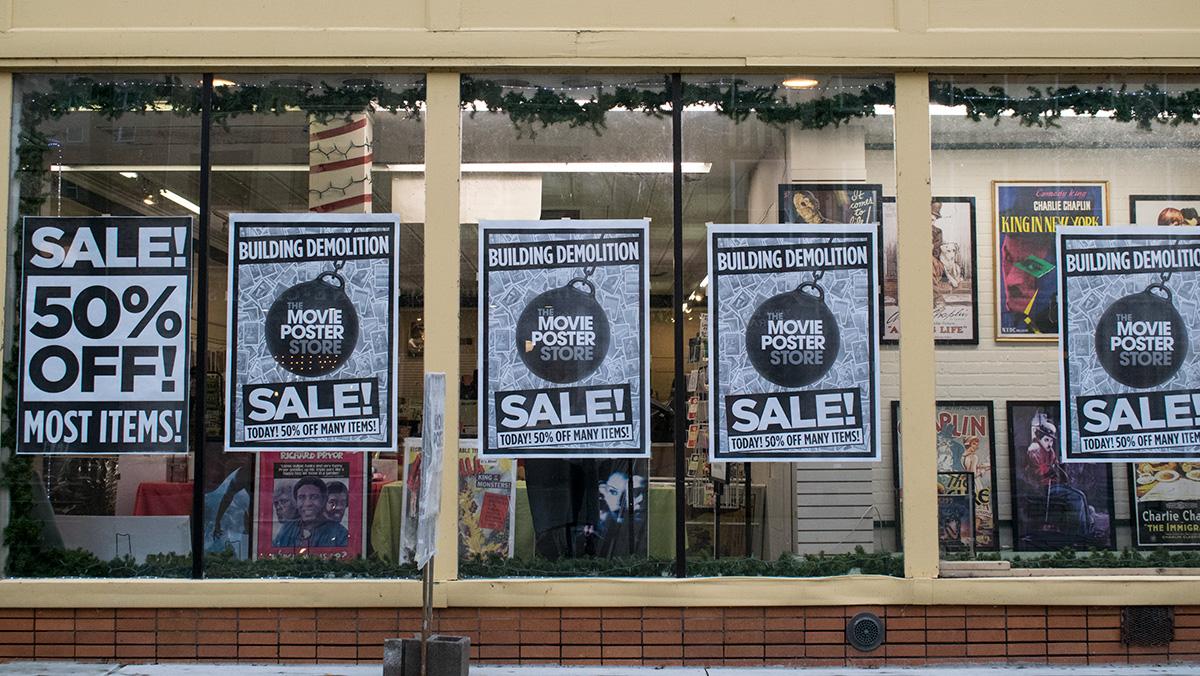 Anna Baggett/The Ithacan
The Movie Poster Store and it's owner, Aaron Pichel, have until Oct. 31 to pack up and move out before the building is demolished for the Harold's Square project — an 11-story, multiuse edifice, which has been delayed for almost four years.
By Daniel Hart — Staff Writer
Published: October 26, 2016

When Aaron Pichel rented his storefront on The Commons in 2012, he planned on its being a pop-up store for about six weeks, after which time, the Harold’s Square project — an 11-story, multiuse edifice — would take his store’s place.

Now, four years later, construction has yet to start, and Pichel’s store, The Movie Poster Store, still occupies the space. Under fluorescent light and cream-colored walls, Pichel sells a plethora of old-timey posters, books, comic books and other novelty memorabilia, scattered disjointedly around the shop.

David Lubin, owner of L Enterprises, the real estate development company for Harold’s Square, said that before the end of the year, demolition of the poster store’s building will begin. Also being torn down will be the former homes of Race Office Supply and Alphabet Soup, occupied currently by a temporary organizing space for Lubin’s other project through another company, Unchained Properties LLC (UP). The Chain Works District, a project of UP, will be a multiuse development replacing the former Emerson Transmission Power Plant on South Hill.

Harold’s Square will stretch up four stories on The Commons and 11 stories on the side of Green Street. Originally approved in 2013, the project has been delayed for almost four years because Lubin has had trouble finding renters to fill the over 27,000 square feet of office space, he said. Forty-six residential apartments were originally planned, but that number is now up to 104 mixed-use apartments to compensate for the lack of interest in office space.

Pichel and his business have until Oct. 31 to move out.

The project comes after Lubin purchased two storefronts to the right side of The Movie Poster Store: one from Tony Johnson, owner of Alphabet Soup, and the other from Tom Pine, former owner of Race Office Supply and Funky Junk, a refurbished furniture store Pine rented to Kristina Thelen and David West.

In mid-September, Pichel said, he received a final notice from Lubin to pack up his posters. While Pichel chose to stay as long as he could, Thelen, West and Johnson chose to take their businesses to more retail–populated spaces.

“To be surrounded by vacant stores wouldn’t do any good,” Johnson said.

Thelen and West, former owners of Funky Junk, also said they were happy to change paths to be away from vacant properties.

“There were certainly no tears about moving and all,” he said. “It gave the space some life while we were there. It was a good deal for us, and it worked out.”

JoAnn Cornish, director of planning and economic development for the City of Ithaca, said the city planned with Lubin to have Harold’s Square done at the same time as the reconstruction of The Commons.

“We know why those storefronts are vacant or in transition, but to the visitor, it kind of looks like it’s blighted,” she said. “We finished The Commons, and now, again, we’re going to enter into this two-year period of construction.”

Pine said part of the reason he closed Race Office Supply in 2011, which he had owned since 1986, was because of a two-year period of off-and-on construction of the Green Street parking garage where many of his customers parked.

To prevent repeat customer loss for retailers on The Commons, Cornish said, the city is requiring construction of Harold’s Square to be done exclusively on Green Street, and not on The Commons, unless deemed absolutely necessary.

A storefront in Harold’s Square will cost approximately $4,500 a month, said Phyllisa DeSarno, deputy director of economic development for the City of Ithaca.

When Lubin purchased the building in 2011, West said, Lubin gave existing businesses an option to continue renting once the project was built, but they could not afford it. The couple decided it would be best to move out then rather than continue to do business next to vacant storefronts.

Pichel, on the other hand, said he is happy he was able to sell posters for as long as he did. An Ithaca native, he said he loves seeing the town evolve, including the construction of Harold’s Square. While he said he is sad to go and unsure of where he’ll set up shop next, Pichel said he is happy for the memories the store has brought him.

“It’s not just a business,” Pichel said. “It’s also been a social experiment both for those of us behind the counter and those on the other side of the counter.”