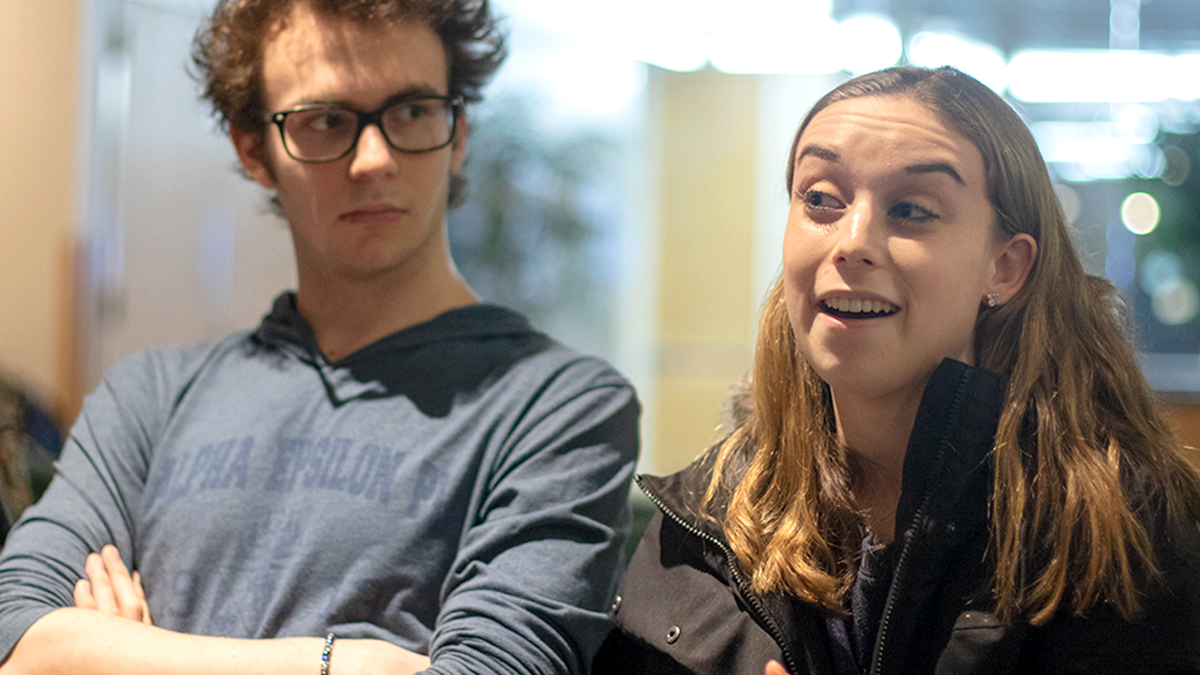 Ithaca College hosted an open forum to discuss Dining Services concerns with the campus community March 4 in the Klingenstein Lounge in the Campus Center.

It was led by senior Ezeka Allen, who is a representative of the Student Governance Council’s Food Advisory Committee (FAC). William Guerrero, vice president for finance and administration, also spoke at the event.

The forum was held in response to the campus-wide dining hall survey distributed the week of Feb. 25 by the college, according to Intercom. Guerrero said he was pleased with the number of responses to the survey from the campus community. Guerrero said that in the 1,900 survey responses, the community called for an additional event to continue a discussion on Dining Services at the college. Sodexo, the food service provider employed by the college, was discussed and criticized at length at the forum. Some of the issues raised by students included increased options for constrained diets like vegetarianism, staff to client communication, improving dining hall sanitation and overall raised food quality.

After Allen and Guerrero’s introductory speeches on who they were, what they were representing and what their personal experiences were with Dining Services, the two speakers along with Jeff Scott, director of Dining Services, and Dave Prunty, executive director of auxiliary services, responded to questions, comments and concerns raised by the students. Students took turns expressing their opinions and experiences with Dining Services. Scott, Allen, Guerrero and Prunty listened to student comments and provided responses.

Allen suggested that Scott could hold office hours, during which community members could express their concerns. Scott said he liked the idea of being accessible and talking with the community.

Guerrero raised the idea of a possible transition from using Sodexo as the college’s dining service provider to a system operated by the college itself.

Sophomore Justin Wooster attended the event and said he agreed with Guerrero’s idea of transitioning to a dining system run by the college instead of a private company. Wooster expressed concern with Sodexo’s ethics.

“Sodexo is a huge, corrupt industry giant that doesn’t care about the individual,” Wooster said. “We won’t have as much control of what’s going on if we’re depending on a CEO in France. … I don’t think anything will ever get better until Ithaca College ditches Sodexo and we hire the Sodexo employees as our own.”

Wooster also raised a concern that the forum should have been better advertised to attract more student voices.

“Communication between students and the administration about Sodexo is important,” he said. “Nobody came to this forum, and they need to advertise this better. I’m one person and there are over 6000 people at this school, and everyone’s voices need to be heard.”

Freshman Shula Adelman said she is frustrated with the dining options provided by Sodexo. Adelman is a vegetarian and said she often has difficulty finding quality food that fits her diet. Many of the students at the forum also expressed their troubles finding vegan, gluten-free or healthy food options.

“I know there are better options, but now there just isn’t good vegetarian food in general,” Adelman said.

Guerrero said he was not surprised about the concerns voiced during the forum, but that there are also many other elements to the dining program that he wants to change.

“We need to improve the dining hall program to improve the student experience here at Ithaca College — the students deserve it,” he said. “I want to improve certainly the freshness of food, the communication of the positive things that are happening and the responsiveness when students do take the opportunity to explain to staff, ‘Hey, we have dirty bowls’ and people need to see the training being implemented where the staff are empowered to make that change.”

Scott emphasized the importance of communication.

“I want to continue more dialogue and more engagement with students,” Scott said. “We’ve been doing more tabling and feedback, and we’re going to try and ramp that up even more.”