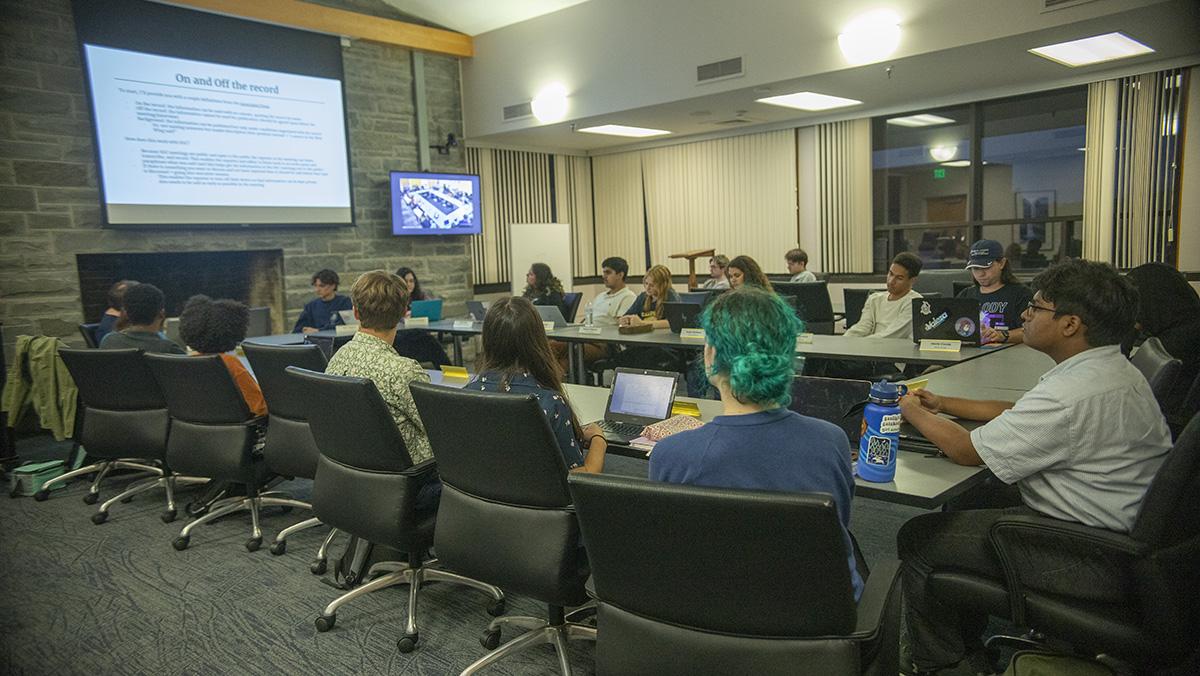 Senior Caitlin Holtzman, editor-in-chief of The Ithacan, also attended the SGC meeting to talk about The Ithacan’s relationship with the SGC.

Senior Class President Connor Watson spoke on behalf of the Appropriations Committee on Sept. 19. The committee meets weekly to allocate funds to officially recognized student organizations on campus from a set budget financed by the college. Watson and senior Max Powers, SGC vice president of business and finance, lead the committee along with other students committed to financially supporting campus clubs. The SGC has many committees that senators, executive board members and interested students are a part of to make change at the college. The Appropriations Committee is required to have two SGC senators on the committee as part of their quorum of voters and attended the SGC meeting to ask for those positions to be filled.

Watson said that without the senators, the Appropriations Committee is unable to meet and therefore cannot review and approve funding requests. This would mean that student organizations would not be able to receive funds for travel requests, events, programming or general operational funds.

“Without the senators, without a full quorum, we can’t provide for [student organizations] the way we want to,” Watson said.

Candidates junior Noah Strathmann and senior Tyler Rodriguez were given two minutes to make reservation of why they wanted to join the committee, followed by five minutes of allotted time for questions from the SGC senators. First-year students and Class of 2026 senators Asata Rothblatt and Eleanor Paterson as well as sophomore Hannah Ahmed, Class of 2025 senator, also made reservations to be senate members of the Appropriations Committee.

All five student and senator applicants were confirmed by the senate and instated to the Appropriations Committee.

Out of a total 18 open SGC senate positions, candidates ran for nine of them, all unopposed. The campus community voted for both Class of 2026 senators, four senators-at-large and senators for the School of Business, the School of Communications, and the School of Music, Theatre, and Dance.

Some of the new senators had been attending previous meetings as guests, but the Sept. 19 meeting was the first time they were at the meeting as official members of the senate.

“It was really exciting to see all of these new senators jump right into this meeting,” senior Senate Chair Austin Ruffino said. “When I joined SGC, I don’t think I talked this much the entire first year I was here.”

For every position, there is an option to make a no-confidence vote, meaning the voter does not have confidence in the candidate or any candidates to fill the role. If a student receives more votes of no confidence than regular votes, that candidate will not be elected.

Junior Utkarsh Maini was elected as the School of Business senator with 26 votes and one vote of no confidence.

First-year student Lili Chalfant ran for the School of Communications senator position and was elected with 21 votes and one vote of no confidence.

First-year student Nicole Sutera ran for the School of Music, Theatre, and Dance senator position and was elected with 21 votes and one vote of no confidence.

Four candidates ran unopposed for senator-at-large out of five available positions, including first-year students Rishabh Sen with 81 votes, Dante Conde with 69 votes, Matthew Williams with 50 votes and Caleb Cackowski with 49 votes. There were four votes of no confidence and a total of 130 voters for the senator-at-large positions.

Cackowski said he felt enthusiastic about his first meeting as a senator.

“It was nice to be part of the discussion as a senator and not just a guest,” Cackowski said. “I’m really excited to get involved at more meetings.”