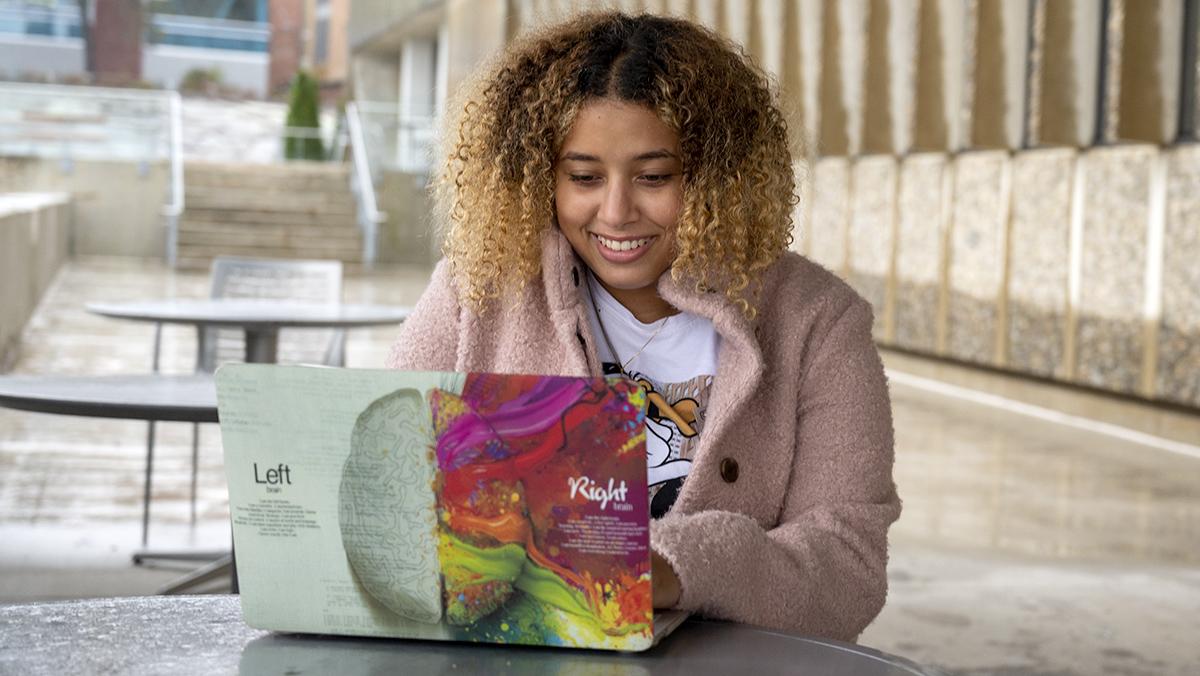 Lauren Lubenow/The Ithacan
Senior Michelle Natal said she works at the library as an Learning Technology Consultant (LTC). LTCs help students and faculty with services such as Microsoft Office, Canvas and Zoom. Natal said she is annoyed by the inconsistency of the Wi-Fi.
By Jadyn Davis — Staff Writer
Published: October 27, 2021

Internet quality around the Ithaca College campus has been a concern for students as the semester continues and more school work has to be completed.

Some students have complained to Information Technology (IT) about the speed and quality of the Wi-Fi, because they are having trouble completing assignments and connecting with friends and family. IT is actively working to improve and add more Wi-Fi to the college campus and is open to hear students’ issues with the current Wi-Fi. The college offers Wi-Fi to students in residence halls, apartments, academic and administrative buildings.

David Weil, chief information officer, said at the Oct. 6 Student Governance Council meeting that IT has improved wireless access outdoors by the Dillingham Fountains and is working to improve access in other locations around campus as well. He said there are currently over 1,500 Wi-Fi access points throughout administrative buidlings.

In order to have internet access, students have to set up an account with Apogee and connect to MyResNet, which is the option the college offers for Wi-Fi. There is a basic service which is free of charge and an upgrade package which costs $100 per semester. In the upgraded package, students can connect 21 devices instead of 11 and have 110 megabits per second rather than 60. The use of personal routers are not allowed, according to the college website.

Junior Jack Acello said he uses the upgrade package of the school Wi-Fi and still has issues with slow internet speed.

“The Wi-Fi around campus sucks,” said Acello. “I pay for the better version of it and it still sucks. Maybe the school should make multiple networks for each building, that way Wi-Fi has fewer people on at the same time.”

Weil said that both Apogee and IT at the college are hearing issues about the Wi-Fi and even had to deal with a broken fiber optic cable.

“For the most part, the issues that IT and Apogee hear the most from students is for assistance with configuring their personal devices,” Weil said. “We did have a fiber optic cable break a few weeks ago that feeds the Hilliard Residence Hall which resulted in a number of service tickets during that outage.”

Having access to Wi-Fi breaks down communication barriers, because it enhances collaboration between students and teachers and inspires parental engagement by allowing students and parents to have access to information outside of the classroom, according to an article from Redway Networks.

If students or faculty at the college have trouble with an internet connection, hardware and printing or online applications, then they are able to contact the Information Technology Service Desk located in Job Hall. The service desk provides technical support over the phone, email, real-time chat and walk-in support, according to the college’s website.

One of the reasons for poor internet quality is because some colleges have thousands of devices on the same internet at once.

Senior Michelle Natal said she works at the library as an Learning Technology Consultant (LTC). LTCs help students and faculty with services such as Microsoft Office, Canvas and Zoom. Natal said she is annoyed by the inconsistency of the Wi-Fi.

“I don’t think IT has much to do about it really, but I think that it would be really helpful for my Wi-Fi to not cut out when I’m walking from place to place and if it wasn’t so slow,” Natal said.

Sophomore international student Mikolaj Konieczny said the lack of Wi-Fi has made it difficult to connect with students and professors.

“It’s a problem for students who are international like me,” Konieczny said. “They might not have an American SIM card. Last semester, I relied only on Wi-Fi. Trying to meet up with a professor and students caused a lot of problems for me. We need more accessible Wi-Fi for everyone.”

Sophomore Andres Lazo said he has not had any particular issues with MyResNet, but said he thinks the Wi-Fi needs to improve.

“I do think that there is an issue sometimes where there’s a lot of people using the internet in the same place,” Lazo said. “Maybe the school should look into stronger and more stable connections.”

Weil said this year IT is working to upgrade about 800 Wi-Fi access points which were initially installed about six years ago. Next year, IT will seek to replace the remaining 700 access points. They will repeat this cycle every five to six years.

Weil said if students are having issues with the Wi-Fi it is best to contact IT and Apogee.

“Once we or Apogee learn about an area that may have coverage issues, we go out to investigate,” Weil said. “If there is a malfunctioning access point, we repair or replace it.”