Students host forum on future of Dining Services at IC 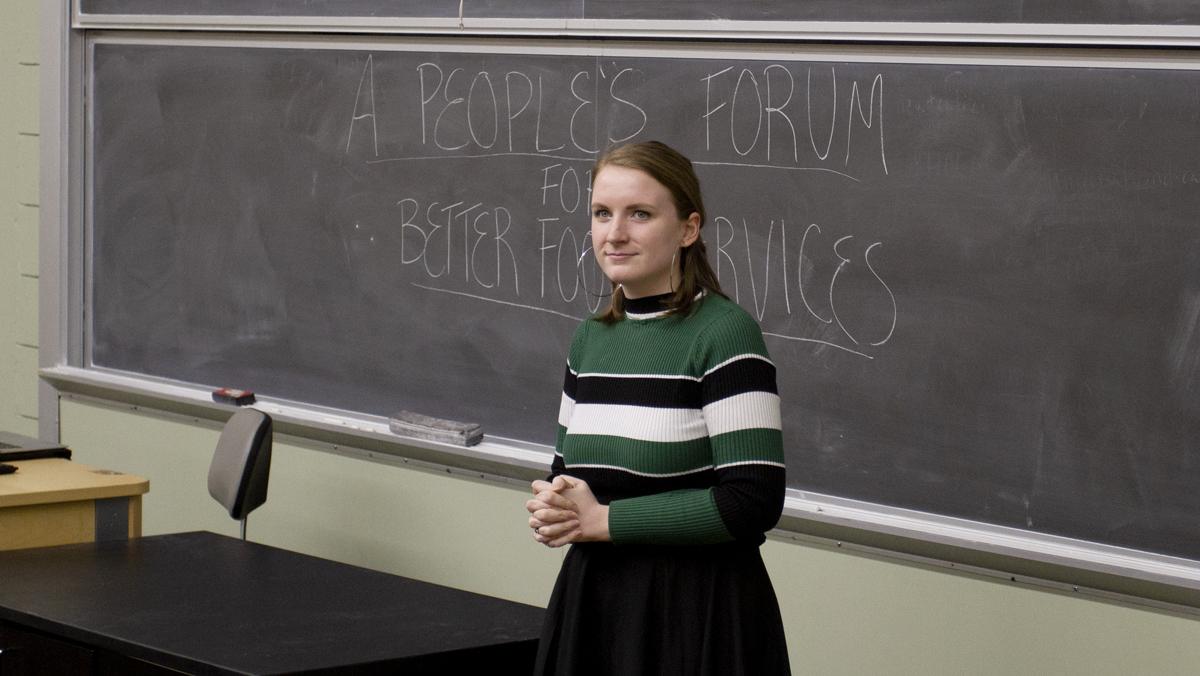 Jackie Marusiak/The Ithacan
Sophomore Carmen Enge, one of the students who founded the organization, spoke at the forum on March 19 about the future of Dining Services at Ithaca College.
By Alyshia Korba — contributing writer
Published: March 20, 2019

The event included a panel of representatives from the college that discussed the future of Dining Services and addressed concerns brought up by the students at the event. Approximately a dozen members of the community attended. The college announced March 18 that it will be transitioning to a self-operated dining service instead of continuing its contract with Sodexo. This decision was made after complaints from students about the quality of the food being served.

Sophomore Carmen Enge, one of the students who founded the organization, said she started the group in the hopes that it would start a discussion between faculty and students regarding Dining Services.

“My main goal of this discussion was to increase transparency, honesty and openness in the college community,” she said. “Having this discussion is a way to bring people together to talk about food service.”

Bill Guerrero, vice president for finance and administration, said during the forum that the college is still in the process of planning the new dining program.

“It’s really exciting but really scary, too,” Guerrero said. “This decision wasn’t begun as the result of a moldy piece of bread — this was a long going process.”

Dave Prunty, executive director of auxiliary services, said the new program will not maintain the practices of Sodexo.

“The whole point of going self-operated was so we can determine what the best practices are for our students,” he said. “We need to look at things in a new light, and this is a chance to really do something different.”

At the event, Jeff Scott, director of Dining Services, said he hopes to improve the options available for students who have dietary restrictions. He said he plans to have more inclusive entrees that cater to the average student as well as students who have food allergies or are vegans or vegetarian.

“We’re trying to be more inclusive so that there’s food that students like, and it happens to be gluten-free and soy-free, so many people can enjoy it,” he said.

One student who attended the event asked whether employees in Dining Service’s management would be continuing their work at the college despite the canceled contract with Sodexo. Scott, who is employed by Sodexo, did not comment about his future at the college but did say that the college is allowing all Sodexo employees to become employees of the college.

Senior Liam Audet expressed concerns about the future of Sodexo employees who are currently working at the college. Audet said he has heard from some Sodexo employees that they have felt disrespected by management at times and he asked how the college plans to address this.

“Workers are entitled to be treated fairly and treated with respect,” Audet said. “Those are people whose whole livelihood is based on Sodexo.”

Scott said in response that Dining Services will be working with the current employees throughout the transition process to help them decide if they will continue working at the college and that employees will be involved in planning the changes to the dining service.

Prunty said the college is planning to continue to engage with students and the local community about the changes. He said students will have opportunities to give feedback about changes during the transition process as well as get involved with meal planning and food preparation. Prunty also said they will look into opportunities to collaborate with local businesses including Ithaca Bakery, GreenStar and Purity Ice Cream.

“We want to get more people involved,” Prunty said. “We’re going to need some help and patience because this is all brand new. We’ll have some stumbles, and we’ll try stuff that won’t work well.”

Enge said Not Another Bite is planning to host similar discussion events for students to communicate feedback and suggestions about the changes being made throughout the college’s transition to self-operated dining services.