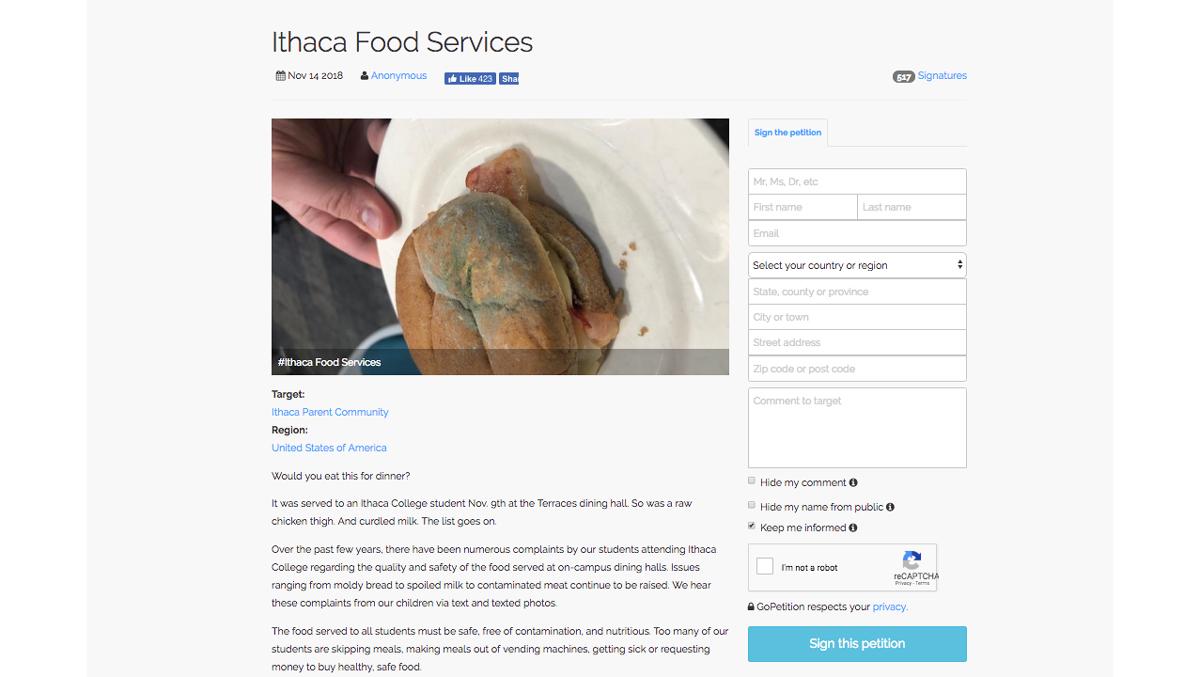 Courtesy of GoPetition.com
The petition to review dining services was created by parents of students at Ithaca College. It began to circulate Nov. 14, claiming that the moldy hamburger bun was served in Terrace Dining Hall on Nov. 9.
By Ryan King — Staff Writer
Published: December 5, 2018

A petition circulating social media calling for changes to Ithaca Colleges dining practices has garnered over 500 parent and student signatures in recent weeks.

The petition, which was posted before Thanksgiving Break on Nov. 14, included a picture of a moldy hamburger bun that the petition claims was served to a student in Terrace Dining Hall on Nov. 9. The petition appears to have originated from a parent, but the author posted the petition anonymously. The Ithacan made several attempts to reach out to the author for comment but received no response. The petition calls on the college to conduct a comprehensive review of food services on campus and to explore the possibility of partnering with the Cornell University food studies program in that process.

“Over the past few years, there have been numerous complaints by our students attending Ithaca College regarding the quality and safety of the food served at on-campus dining halls,” the petition read in part. “Issues ranging from moldy bread to spoiled milk to contaminated meat continue to be raised. We hear these complaints from our children via text and texted photos.”

“I certainly understand the concerns, and there are opportunities to plan for the future, and I’m all for that,” Scott said. “One of the things we always try to stay on top of is monitoring the quality of the ingredients that are being put into service. And we want to make sure that frontline staff and their supervisors are following our guidelines and our standards for doing that.”

Scott said that he is open to working with the Cornell food studies program and that Dining Services is constantly evaluating its work and working toward change.

Scott said Dining Services takes a number of steps to get student feedback on how the services could be improved, including comment cards, online feedback, formal surveys and food advisory committee meetings, in which Scott meets with a group of students on the Food Advisory Committee regularly to get feedback.

He also said he appreciates getting feedback from students and parents and is always open to suggestions.

“A lot of people complained that the food wasn’t safe to eat,” he said. “I feel that it’s important because the school will listen more to the parents.”

Freshman Wesley Smith said he is mostly content with the food from dining services and did not sign the petition.

“I think it’s pretty good,” Smith said. “I think Late Night’s probably the best, but it’s better than high school. I don’t really have any huge issues with the food quality.”

Freshman Christopher Masciarelli said that he is fairly satisfied with the food from Dining Services but that he signed the petition because he was concerned about the possibility of food contamination.

“It’s not as bad as everyone says it is,” he said. “I signed it because the picture on the form was pretty gross, and if that was real, that is a problem.”

This is not the first time Dining Services has received criticism from the campus community. During Spring 2017, it faced criticisms for cross-contamination and improper handling of food. There have also been petitions for Sodexo, which is the contractor for the college’s food services, to diversify its food selections and for the college to drop Sodexo altogether.

Some of the social media comments on this recent petition suggested that the college should stop using Sodexo.

William Guerrero, vice president of the Division of Finance and Administration, said he has been reviewing the dining program and considering the cost and student satisfaction with the program. He said this review began in July 2018, before this recent petition.

“Ithaca College has partnered with Sodexo for a very long time. We have many long-term and very valued employees,” he said. “The feedback from our students and parents has been very much appreciated and taken seriously.”

Guerrero said major changes, such as switching contractors, would be difficult to do, but he said the college is continuing to review its program.

“Besides the continued review of the program quality and staff training, we are working on some real exciting possibilities for the spring semester,” he said.

In the past, Sodexo has been a focal point of student complaints.

According to The Ithacan’s archives, there was a series of protests in Fall 2000 related to Sodexo’s connection to private prisons.

The previous semester, the college had announced that Sodexo would be its new food services contractor, replacing Chartwells, which previously had a contract with the college since 1987.

Protests against Sodexo reached a climax in early December 2000 when students organized a 34-hour sit-in in the Office of Admission, which was located in Job Hall at the time. Some of those protesters were judicially referred after the sit-in.

Sodexo serves food to private prisons and runs at least 87 private prisons outside the U.S. that do not have the death penalty. In the past, it has also owned large stakes in private prison firms but sold many of those shares in response to student protests.

Some college students criticize private prisons and the business model associated with profiting on incarceration, so they do not like their college or university’s supporting organizations involved in that business.

Criticisms of Sodexo are not just limited to Ithaca College. There have been student protests about Sodexo in campuses across the country for decades. The company has also faced several scandals over recent years.

In 2010, Sodexo reached a $20 million settlement with New York state for overcharging New York school districts. In 2013, it briefly suspended some of its frozen beef products after it discovered horse DNA in one of its suppliers’ beef samples. Recently, it has faced several lawsuits for serving undercooked beef to at least two military bases in California.

Most of the criticisms of Sodexo center around its food quality and business practices. One of those practices that sometimes receives attention on campuses is its private–prison practices.

Other major food caterers also have a history of receiving backlash on college campuses. One example is Aramark, which is also involved with food catering for private prisons. There have been at least two prison riots that started, in part, because of concerns about food quality in prisons that Aramark served. The student government at New York University recently took steps to stop purchasing food from Aramark, which has a contract with that institution.

The foods we eat and, indeed, our nutrition, are guided by our socio-cultural upbringing and surroundings.

Following a year of demonstrations from students and Ithaca residents, Sodexo dining hall employees have won the battle for a campus-wide living wage at Ithaca College. But students and employees are still looking for more changes.

In an effort to promote a living wage for all Sodexo employees at Ithaca College, students and members of the Ithaca community are joining forces for the Labor Initiative in Promoting Solidarity’s “Week of Action.”