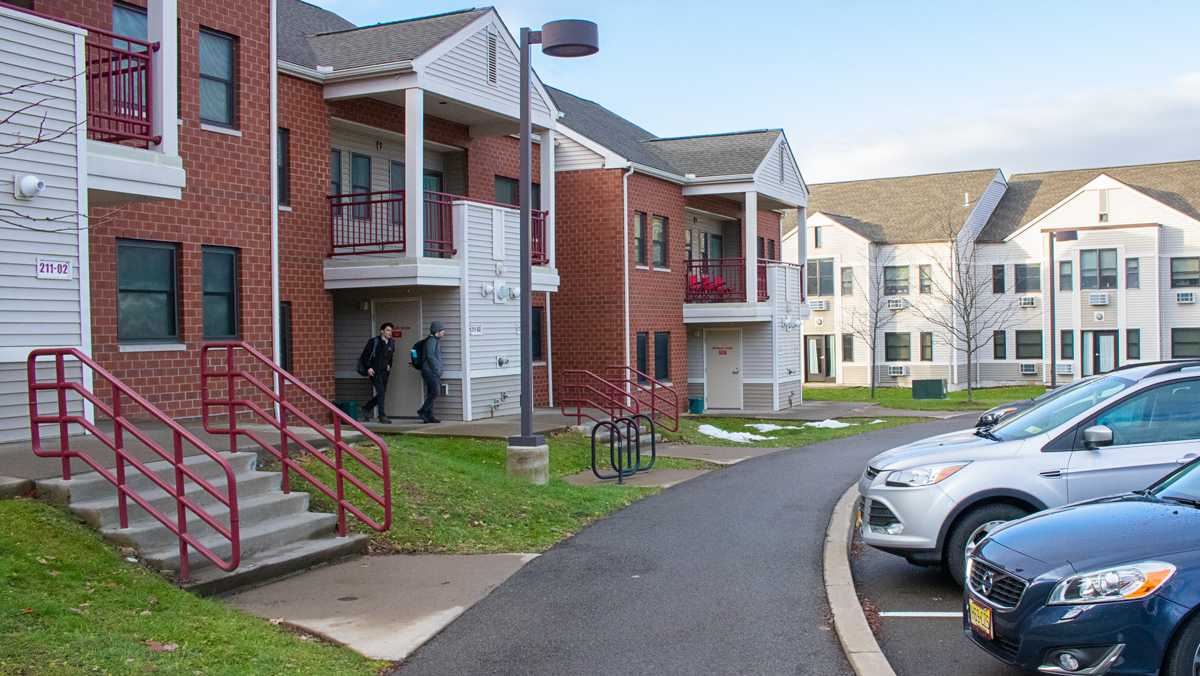 Caroline Brophy/The Ithacan
The college’s residency policy states that off-campus availability can vary for juniors because over-occupied residence halls can negatively affect the community. Seniors will still be allowed to live off campus for the 2021–22 academic year.
By Jay Bradley — Contributing Writer
Published: April 15, 2021

Lower enrollment projections at Ithaca College have resulted in the elimination of the off-campus application process for juniors for the 2021–22 academic year.

Due to reduced enrollment projections, the upcoming academic year has been anticipated to meet housing needs for freshmen, sophomores and juniors, and there will be no off-campus application process. Enrollment in Fall 2020 was 5,354, down from 6,266 in Fall 2019 and 6,517 in Fall 2018, according to the Office of Analytics and Institutional Research.

“The off-campus application process exists for the sole purpose of approving some interested students to move off campus in order to make sure there is enough housing available for our new and returning students,” a Nov. 3 announcement from the Division of Student Affairs and Campus Life stated. “If it is anticipated that there will be on-campus housing for all first-years, sophomores, and juniors, an off-campus release process will not occur.”

Sophomore Mary Turner is graduating early, in May 2022, and had been hoping that her last year at the college would be as she envisioned. She wanted to live off campus with her boyfriend to save money and learn more about living on her own before leaving college.

“Essentially for myself and a few of my friends that have decided to graduate an entire year early, that opportunity to possibly apply to live off campus has been completely negated between, like, reduced enrollment and COVID, so it sucks,” Turner said. “I think it’s a bit frustrating that they’re not being open-minded to the fact that some people in the Class of 2023 have decided to graduate early.”

In most years, a limited number of off-campus applications are approved for non-seniors and seniors who have not lived on campus for six semesters. Last year, approximately 238 juniors were accepted to live off campus after 470 applied, a high volume which led to system errors. This resulted in many rising juniors speaking out against the policy.

“Because it’s a residential college, … the bulk of a student’s time would include living on campus, and that on-campus experience is part of the IC experience,” said Laura Davis, assistant housing director for the Office of Residential Life.

Davis said that typically students live on campus for at least their first three years, and a goal of the Office of Residential Life is to ensure students can be housed on campus for that time.

She said availability for off-campus housing is comparable to a pendulum, in which some years with higher enrollment allow more students to engage with the off-campus process and others, like this year, keep students from living off campus due to lower enrollment.

The college’s residency policy states that off-campus availability can vary for juniors because over-occupied residence halls can negatively affect the community.

Seniors will still be allowed to live off campus for the 2021–22 academic year.

Davis said that despite being fully remote in the fall and some students studying remotely this spring, neither will be counted against the school’s residency requirement and that those with concerns or questions should email housing@ithaca.edu.

Sophomore Andrew Tell said that while he would have enjoyed living off campus and did want to, he was not disappointed by not being able to apply.

“I was already having the mindset like, ‘OK, I already know junior year I’m going to be living on campus; I want to have my off-campus year be senior year because that’ll probably be a better time to live off campus,’” he said.

Sophomore Lou Baron said it is disappointing that juniors will not be able to move off campus.

“I probably would’ve applied for off campus, but as long as I get a two-person Garden apartment, I won’t be upset,” Baron said.

Sophomore Nicolas Mattera is currently living off campus and said he is upset that the college is making juniors live on campus next year. Underclassmen were allowed to live off campus during this academic year due to the COVID-19 pandemic if they signed a lease before Oct. 1, 2020.

“I know there’s a required amount of time we have to live on campus, but it does seem pretty unfair given the fact that the college can barely guarantee preferred housing for upperclassmen,” he said.

A driving force to wanting to live off campus for Ithaca College students is the cost.

The typical cost of housing for an on-campus apartment is $10,934 in a Garden Apartment and $13,018 for a single Circle Apartment. Apartment or house rentals off campus can often save students money overall, due in part to the potential requirement of a meal plan.

Students who live in on-campus housing are required to purchase the Resident Meal Plan, which costs $3,200 per semester, with an exception to apartment housing. Those living in the Circle Apartments or Garden Apartments can opt out of a meal plan or choose the less expensive commuter plan for $1,000 per semester with fewer meals per week.

However, for many in the community, that lower price can be hard to come by, and housing affordability is an often-discussed issue in the broader Ithaca community.

A new development aimed largely at students, set to start construction this summer, will provide more options for Ithaca College students looking for off-campus housing nearby to campus.

The Outlook Apartments, set to be located at 815 S. Aurora St., approximately a two-minute drive from campus, was originally approved in 2019 and is expected to begin construction in May after a delay due to the COVID-19 pandemic, Laura Mattos, chief operating officer at Visum Development Group, said.

The luxury apartments, developed by Visum and Modern Living Rentals, an Ithaca-based real estate company, are expected to compete at a lower cost than similar developments but may still be more expensive for an academic year than on-campus housing. A final cost is still to be announced, but Mattos said they are currently hoping to price it at approximately 20% less than competitors like 140 Seneca Way and City Centre, which costs approximately $2,000 per month for a single-bedroom apartment.

Mattos said Visum expects people to move in by August of next year, with pre–leasing set to start at approximately the same time as construction.

“Living off campus isn’t always more affordable, but from the prices I’ve seen and from my friends’ experiences with living off campus, your chances are that you’re going to get better housing for a cheaper price,” Turner said.

Aside from cost, challenges have arisen for students in the past when attempting to find quality off-campus rental housing. Recent steps taken by the college’s Student Governance Council (SGC) and City of Ithaca Common Council hope to improve renting experiences for students. This includes Ithaca partnering with College Pads to facilitate housing arrangements and addressing landlord accountability.