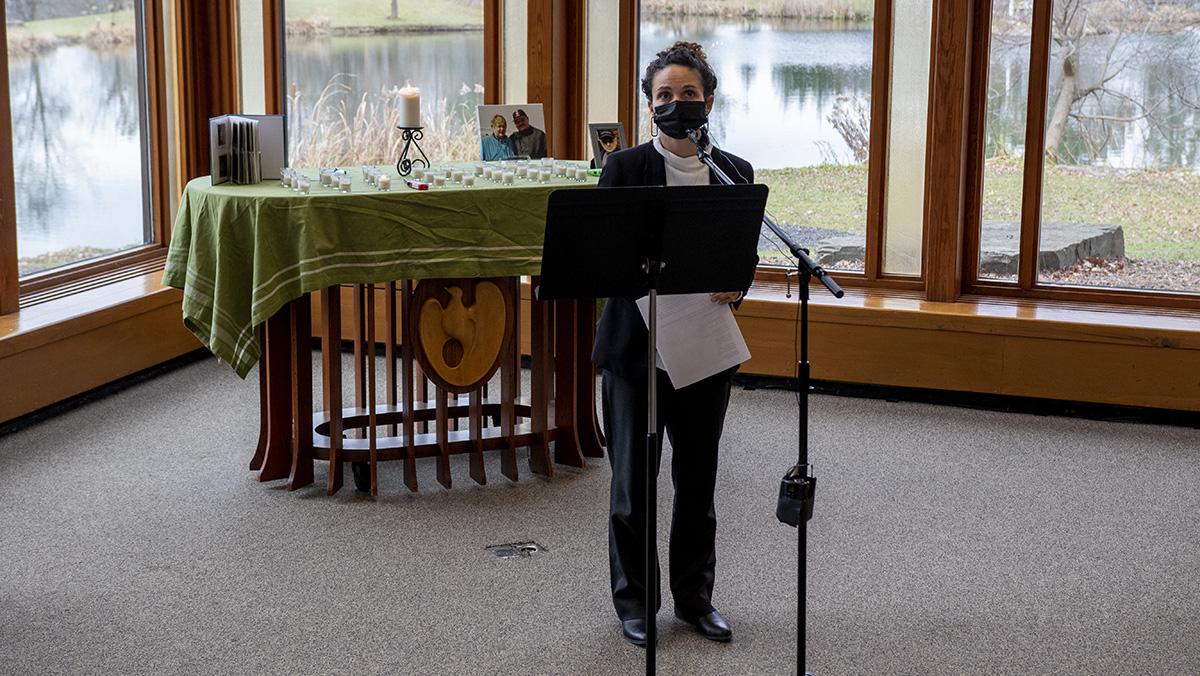 Brendan Iannucci/The Ithacan
Lauren Goldberg, interim director of the Office of Religious and Spiritual Life and executive director of Hillel at Ithaca College, spoke at a vigil for Steven Rorick on Dec. 7 in Muller Chapel.
By Lorien Tyne — Staff Writer
Published: December 8, 2021

Somber music made its way through Muller Chapel on Dec. 7 as Steven Rorick’s loved ones and his Ithaca College family lit candles and celebrated his life.

Rorick died the morning of Dec. 3. He was a member of the college community for over 30 years. He started as one of the college’s Challenge Industries – a nonprofit that helps people with employment barriers enter the workforce – employees and then transitioned to Terraces Dining Services.

Approximately 30 people joined the vigil in person and more attended virtually through Zoom. Numerous stories were shared describing Rorick’s infectious joy that made all that crossed his path reflect his smile. Many of his coworkers, including Scott McWilliams, director of Dining Services Administrative, shared words in memory of Rorick.

“He was just a fantastic guy and he made everybody smile,” McWilliams said. “He made me smile and feel grounded every day. [He is] deeply missed.”

After some shared their fond memories of Rorick, several people walked down to the altar which held pictures of Rorick and candles. Many of the candles were lit by Rorick’s friends and family in honor of his life. A poem was also shared by Lauren Goldberg, Interim Director of Religious and Spiritual Life and executive director of Muller Chapel.

“Wow, he was quite a guy,” Rorick said. “He didn’t meet anybody that wasn’t his friend. Once he met you, you were his friend for life.”

Interim President La Jerne Cornish expressed her deep sadness at Rorick’s passing. She said the community was hurting between the recent loss of Rorick as well as the loss of another college employee, Stephen Karl, mental health counselor for the Center for Counseling and Psychiatric Services.

“Stevie was a part of this community for more than 30 years,” Cornish said. “He was here longer than many of us … At the end of the day, I always said hello and he always smiled and said hello back, and so we will miss him. As I said earlier, may his memory always be a blessing.”

Many tears were shed during the vigil, but stories of Rorick also created echoes of laughter in the chapel as if Rorick himself were standing in front of them making his jokes and brightening everyone’s day as usual. Those who gathered were reminded of how hard the past couple years have been because of the COVID-19 pandemic and that Rorick lifted everyone’s spirits through the worst days. Recently, the dining halls have been incredibly understaffed. One attendee shared during the vigil how they would always find Rorick picking up tasks outside of his job just to help his coworkers.

Lorri Eastman, senior supervisor in Dining Terraces, spoke fondly of Rorick. She was not the only one that told stories of how much Rorick impacted her life.

“Steven has been a friend of the family for a long time,” Eastman said. “I’ve worked with him for quite a few years. These past six months, he has worked pretty close to me. He has actually been my best friend at work. He was a blessing to work with. I’m really gonna miss him.”