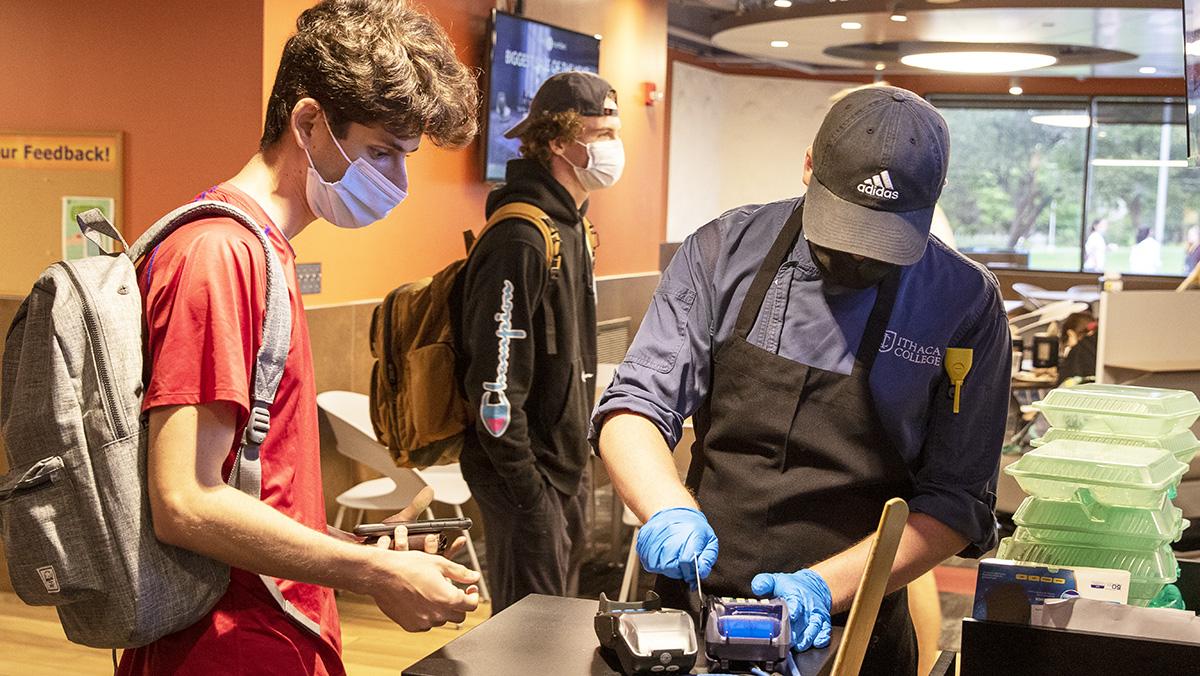 Thomas Kerrigan/The Ithacan
Businesses across the U.S. have been impacted by the labor shortage, which has been heavily influenced by the COVID-19 pandemic. As of Sept. 3, 8.4 million people were unemployed in the U.S., and on the last business day of July, there were 10.9 million job openings, according to the Bureau of Labor Statistics (BLS).
By Syd Pierre — Assistant News Editor
Published: September 16, 2021

Ithaca College is not immune to the effects of the national labor shortage, which has impacted staff and students across campus.

Businesses across the U.S. have been impacted by the labor shortage, which has been heavily influenced by the COVID-19 pandemic. As of Sept. 3, 8.4 million people were unemployed in the U.S., and on the last business day of July, there were 10.9 million job openings, according to the Bureau of Labor Statistics (BLS). The U.S. Department of Labor reported that the unemployment rate in August was 5.2%. While labor demand is increasing across the country, the quit rate — number of jobs quit out of the total employment — has also increased. This has led to what some are calling “The Great Resignation,” where many individuals are leaving their jobs in search of more money, better working conditions and flexibility. According to the BLS, the quit rate during July was 2.7%.

Hayley Harris, vice president of Human Resources, said the number of staff at the college needed to align with the number of students enrolled. As part of the Ithaca Forever strategic plan, the college cut 116 full-time equivalent (FTE) faculty positions and 26 departments, programs and majors, which had to be accelerated because of the COVID-19 pandemic’s impacts on the college’s finances. The Non-Academic Program Prioritization — which focused on administrative, operational and staff functions at the college — has resulted in a number of administrative and staff eliminations.

Karen Armstrong, assistant to the dean in the Roy. H Park School of Communications, said the school has lost several staff positions over the last few years, and she now has to take on certain tasks for the entire school, as opposed to working for just one department.

“That left me supporting 50 faculty,” Armstrong said. “So I’ve managed over the last few years, but now I feel like … I think things just aren’t getting better on this campus. They obviously are getting worse with all the cutbacks. And people just keep getting work piled on them that they can barely keep up with. So people are exhausted, people are frustrated.”

“There’s nothing wrong with trying to, you know, be more efficient in the way we do things, I get that,” Armstrong said. “But there’s only so much that one person can do. You know, there’s a point at a time when we do need more staff. I mean, I can tell you that the atmosphere around here has definitely changed. I’ve been here for over 39 years, and it is definitely not the way it used to be.”

Armstrong said that because of the number of departments that are down in staff, it takes longer to get tasks down or get a response because everyone is backed up.

Some other administrative assistants at the college declined to comment on the nature of their workloads.

Katie Stone, assistant director for upper campus operations for Dining Services, said via email that Dining Services currently has 85 staff members. She said there are 30 positions available to fill, not including student employee positions.

“There are approximately 675 hours of unfulfilled student labor each week across Dining Services units,” Stone said via email. “There are over 1,300 hours of labor per week left unstaffed and between 60 and 100 opportunities for student employment.”

Stone said those numbers do not include the required student labor for the planned openings of Campus Center Dining Hall Late Night, the satellite cafes or for Towers Marketplace to be open seven days a week. She said the long wait time and lines students have been experiencing at the dining halls are unrelated to the staffing issues, but rather a byproduct of eating food in a restaurant-type setting.

“If you’ve been downtown, you can’t walk 10 steps without finding a ‘for help’ sign, like the entire Commons full of stores and businesses, they can’t hire people,” Prunty said. “So I think it’s a thing happening across the entire area, if not the entire country.”

Harris said that finding qualified candidates to fill vacancies has been a challenge.

“This can be attributed to a number of factors, including reluctance by some to be active in the workforce during the pandemic, extended state and federal unemployment benefits, childcare concerns due to K-12 school opening plans being in flux and a high number of available positions in our area,” Harris said via email.

Prunty said in order to find more employees, the college is sending people to job fairs, advertising on the radio and on online boards.

Sophomore Brady Spaulding said he has been working at the Campus Center Dining Hall for three weeks and has noticed a gradual filling of roles.

“You would kind of anticipate normally that with a situation like that, hiring would be done over the summer,” he said. “And then, once everyone’s on campus for the semester, everyone would start at once, but it really hasn’t been like that. It seems like every day is someone else’s first day.”

“Once a package goes in [to the locker], it’s in there for 48 hours, if someone picks it up an hour later, we can put another package in,” Golden said. “Whether or not there’s a staff person available to do that has no bearing on how long that interval will be.”

Tom Dunn, associate director and deputy chief for the Department of Public Safety and Emergency Management, said the staffing levels in the department have not decreased or increased, but the department is seeing some turnover of positions. Dunn said he did not have the exact numbers of the staff, but the positions that need to be filled include frontline staff, like security and patrol officers, and non-frontline staff, like administrative assistants.

“We’re still able to provide the same services and support to our students,” Dunn said, “Being down a few positions would necessitate some overtime for some of the officers. But again, the services that the students can anticipate from public safety are the same.”

Junior Sophia Roy said she works at the Fitness Center and said she has one shift where she is occasionally the only staff member working. She said she feels like she cannot ask for a shift off.

“I feel like I cannot plan anything during those times because I feel like I need to be there,” Roy said. “They don’t have anyone else to cover the shifts, and I would hate to not show up when no one can work.”

Senior Simeon Alvarez said he works at the Ithaca College Library. He said the library has had to change its hours because it cannot stay open as long as it used to because it no longer has the budget to support more student employee and staff positions. According to its website, the library is open 7:30 a.m to 11:59 p.m on weekdays, 7:30 a.m to 8 p.m. on Fridays, noon to 5 p.m. on Saturdays and noon to 11:59 p.m. on Sundays. In the spring semester, the library was open from 7 a.m. to 2 a.m. Mondays through Thursdays, 7 a.m. to 5 p.m. on Fridays, 10 a.m. to 5 p.m. on Saturdays and 10 to 2 a.m. on Sundays.

“In the past semesters, the library’s advertised it’s always open for students,” Alvarez said. “I feel bad for those students because I wish I could do something to be open longer. I wish I could, you know, be offered hours to work longer, but I can’t, just due to the situation.”