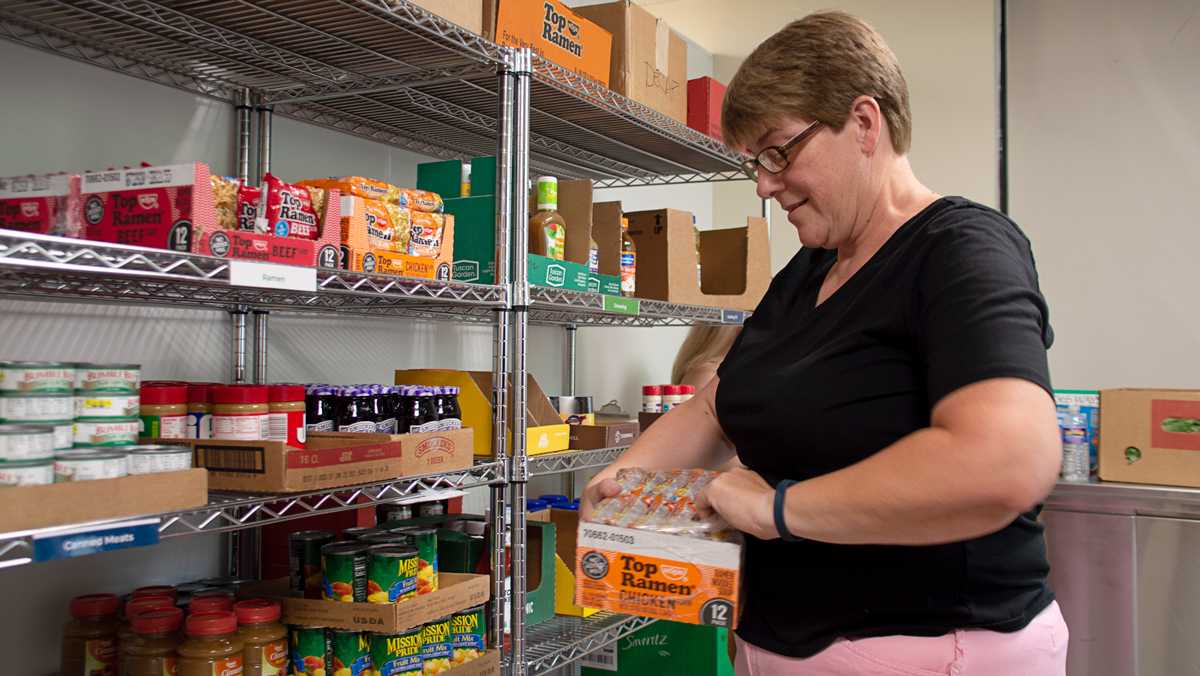 Ana Maniaci McGough/The Ithacan
Doreen Hettich-Atkins, director of strategic planning and administration in the Division of Student Affairs and Campus Life, is one of the volunteers at The Pantry, Ithaca College’s on-campus food pantry.
By Ashley Stalnecker — Assistant News Editor
Published: September 4, 2019

Even in the coldest weather, Stephanie St. John, academic operations specialist for the provost and academic affairs and a volunteer at The Pantry, said that Ithaca College students have lined up for their turns to pick out food from the food pantry established last spring in the DeMotte Room on the ground floor of the Campus Center.

“That just shows how much people really needed the food pantry because of the fact that, even though it was freezing, people still came,” St. John said. “That made me realize that what we’re doing is a really big deal. Being able to help with that is really important.”

The college has completely relied on volunteers to stock and manage The Pantry since it first opened Feb. 21. The Pantry is an on-campus food pantry where students can take a bag of food items and toiletries for free. In July, the college partnered with the Food Bank of the Southern Tier so it can restock by purchasing items directly through the food bank. The committee pays for the food purchased from the food bank with donations from alumni and staff. Previously, through donations, volunteers would purchase about $200–$250 a week in food from stores like Aldi’s or Dollar General.

The Pantry is open Tuesdays from 6 to 7 p.m. and Fridays from 4 to 5:30 p.m. The Pantry usually has about three to five volunteers per shift, said Dave Prunty, executive director of auxiliary services. So far, The Pantry has had volunteers from the Ithaca College Nutrition Club and from the Honors civic engagement course taught by David Harker, director of the Center for Civic Engagement. Faculty, staff and students can also volunteer by signing up online or reaching out to one of The Pantry committee members, including Prunty, Harker and Doreen Hettich-Atkins, director of strategic planning and administration in the Division of Student Affairs and Campus Life.

Prunty said approximately 35–45 patrons attend The Pantry every time it is open. The Pantry had 698 total visits with 323 unique visitors as of June 24, Harker said in an email.

St. John said that volunteering for The Pantry was one of the most memorable parts of her experience at the college. St. John will be leaving her position at the college in September for another job. Volunteers are asked to greet patrons at The Pantry and occasionally check the inventory. Some volunteers, like St. John, would help in the restocking process before the college partnered with the Food Bank of the Southern Tier.

“It’s made me really aware of not just food insecurity on our campus but how many other campuses are experiencing something like this,” St. John said.

Data from the 2016 Campus Climate Survey showed that out of approximately 3,000 students who responded, 47% reported experiencing financial hardship while attending the college, and 36% of those — approximately 500 students — reported difficulty affording food.

For junior Laura Kenny, she said that volunteering at The Pantry is more than an addition to her resume — it is her passion. Last semester, she volunteered every Friday.

“Since my freshman year, I’ve been really interested in food deserts and just figuring out things with communities with low incomes, and it never really was brought to my attention how much food insecurity there is on campus,” Kenny said. “I felt like this was like a huge stepping stone toward working on that.”

The Pantry provides several food essentials, including cereals, condiments and basic cooking ingredients. Hettich-Atkins said The Pantry has added flyers with recipes to help patrons cook for themselves with the food they obtain. She said most patrons tend to be students who are usually cooking for themselves for the first time.

As president of the college’s Nutrition Club, Kenny plans to work with Hettich-Atkins to provide programming so The Pantry can go beyond simply providing food. Kenny said she hopes to do cooking demonstrations that will make it possible for students and other pantry users to make complete meals that are healthy and sustainable.

Kenny has also encouraged members of the Nutrition Club to volunteer at the food pantry. Sophomore Annika Playfair volunteered at the pantry throughout the spring semester.

“Just seeing all the people that came in, you realize how many people need food on campus,” Playfair said.

Playfair, an occupational therapy major, said that having a healthy diet directly affects how people function on a day-to-day basis. She said The Pantry makes it easier for people to get the food they need to succeed.

“It’s really convenient for students when you don’t have a car to go off campus or you don’t have enough money to go out and get the basic food,” Playfair said.

Overall, Prunty said The Pantry has been successful because of support from the community and its partnership with the Food Bank of the Southern Tier.

The Pantry was initially established through funds from the Lissy Family Foundation. Dave Lissy ’87, chair of the college’s Board of Trustees, provided funding to establish the food pantry on campus after discussions he had with President Shirley M. Collado and her senior leadership team about how donors can do more to help the campus community.

“The problem of students experiencing food insecurity resonates with my wife and me, and we were happy to be able to contribute through our family foundation to providing one more tool to help Ithaca College respond to it,” Lissy said via email. “It has been a pleasure to observe the widespread interest and support from across the campus that this program has received.”