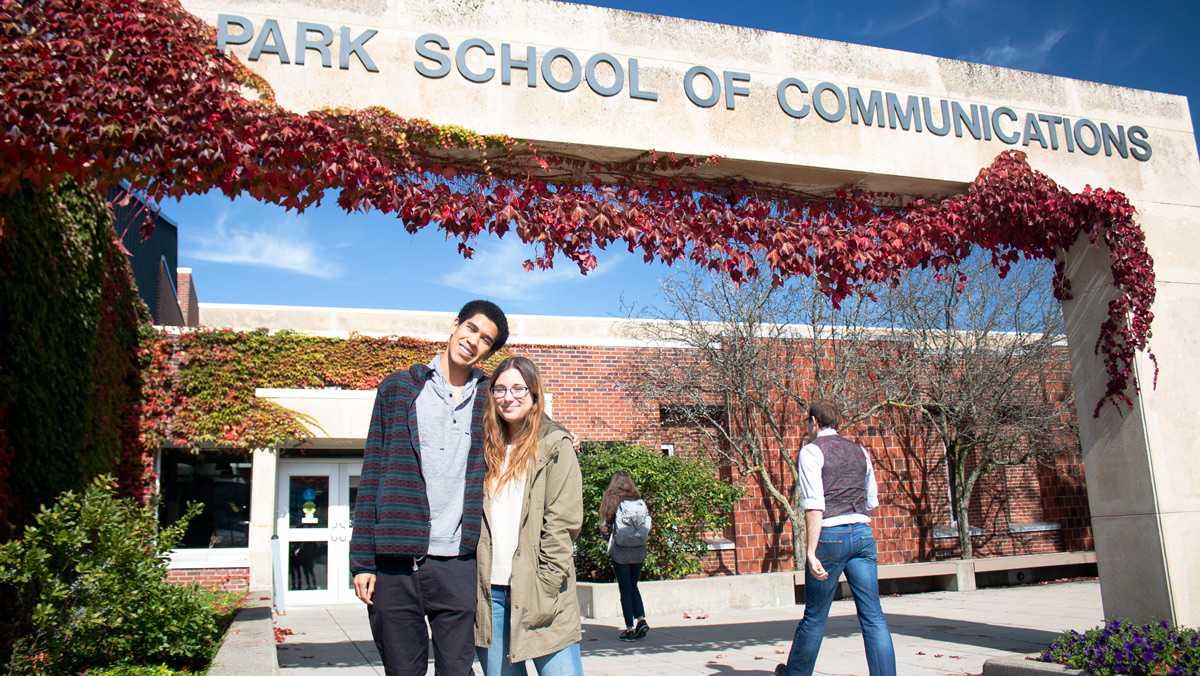 Elyse Kiel/The Ithacan
Juniors Mateo Flores and Skylar Eagle are on the board of Diversity Advocates of Park. It is an organization that aims to address the gaps in diversity in the Roy H. Park School of Communications.
By Skylar Eagle
Published: October 9, 2019

With just over 25% of the undergraduate student population at Ithaca College consisting of people of color, it’s no secret that the college is known as a predominantly white institution (PWI). This creates an obvious disconnect in how we represent ourselves as a student body and as a greater community.

Ithaca is known for being active in social justice movements and also as a fairly liberal cornerstone in western New York. But how much of that allyship is tokenized in this community and on campus?

To be an ally means more than posting pictures of a protest on social media. Allies hold their power in being people who use their privilege to advocate for someone who does not have that same privilege. Diversity Advocates of Park (DAP) is an organization that prides itself on its ability to make a significant impact on the Roy H. Park Park School of Communications community and, eventually, the greater campus community. Our mission is to address the gaps in diversity and accurate representation of diverse identities in the Park School while also working to educate ourselves on the intersectionality of diverse representation.

Intersectionality is often ignored in discourse surrounding social justice issues, especially when diversity is put into the equation. The differences between how the mainstream media portrays white feminism and intersectional feminism and how activists of color are neglected on social media and in popular culture say a lot about how our generation and how our society perceives diversity.

DAP consists of a student and faculty cohort that works closely with Diane Gayeski, dean of the Park School, and a number of other professors to see how the school can improve in areas related to diversity. These areas include highlighting more alumni of color, addressing socioeconomic gaps between students through scholarships and extra help programs, improving accessibility in communications, hosting visiting diversity scholars and, most importantly, creating events focused around these themes in hopes to improve and expand the Park School community.

We also work as a resource to other resources, guiding students to different on- and off-campus organizations that will help them pursue their passions or seek extra assistance in their coursework, self-care or personal health. This is an essential aspect of DAP because it’s impossible to effectively make a difference in your community if you don’t take the time to get to know and care for the people in it. DAP also holds open forums for students to express concerns regarding faculty members, curriculum or any issues they’ve experienced so that we can focus our goals on the problems that actually exist in the Park School, not just from our own interests.

DAP is here to act as a bridge between the students and faculty to address issues of representation and diversity within the Park School because there is an undeniable power dynamic between students and their professors. We want to help facilitate the conversations needed to make effective change in the Park School while making sure students with concerns feel safe, heard and represented.

It’s clear that there is a laundry list of things to improve when it comes to how we approach diversity both in the Park School and at the college. Yes, we need more faculty of color in the Park School, but we also need more representation of alumni of color and how they are living and working in today’s communications industry. It’s great to see the success stories of Bob Iger and David Muir, probably some of the college’s most prominent alumni, but it would benefit students more to see alumni who represent them. Alumni who have experienced the struggles they are bound to run into and alumni who are more representative of the student population.

As much as DAP holds itself as a social justice organization, one of our most important goals is to improve the community we live and work in every day. We strive to represent the meaning of allyship in our work and hope that other students, professors and members of the campus community will follow our example.

Change comes from the bottom up. As students and as future communications professionals, it’s up to us to change the industry and that starts with where we learn and grow, right here at Ithaca College.