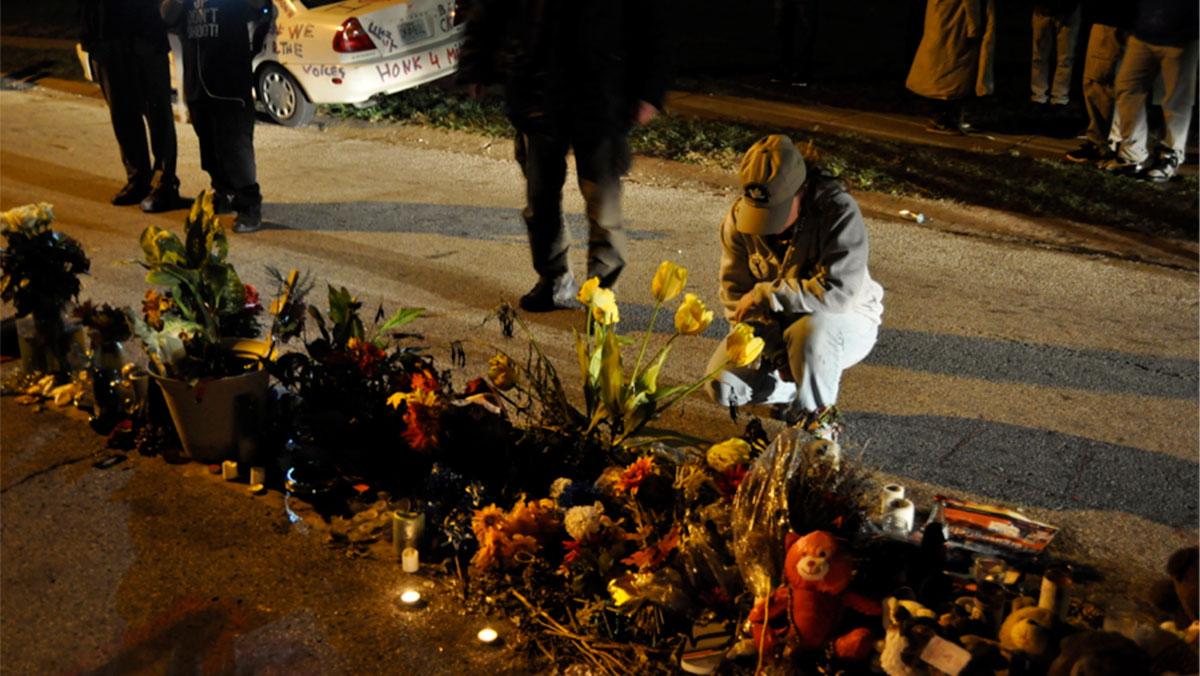 Courtesy of Sarah Pearson
A Ferguson October participant kneels at a memorial dedicated to Michael Brown on Canfield Drive in Ferguson, Missouri, where he was shot and killed.
By Sarah Pearson
Published: October 28, 2014

On Oct. 9, exactly two months after Michael Brown’s death, I traveled 875 miles to Ferguson, Missouri, from Ithaca, New York, to attend Ferguson October — a four-day “weekend of resistance” of non-violent actions in protest of police violence against minority communities. At 10 p.m. that evening, I packed a small bag and got into a car with an individual whom I’d met only moments before, ready to carpool to Ferguson. He shared the same interest and passion for justice and human rights, so we set out to reach Ferguson to protest police brutality and the shooting of unarmed Michael Brown. I was joined by people native to St. Louis and from all across the country with a range of ages, races and political affiliations.

On Aug. 9, Michael Brown, an 18-year-old black man who was unarmed, was shot and killed by Officer Darren Wilson in Ferguson, a working-class St. Louis suburb. There are eyewitnesses that have said Brown was shot when he was trying to surrender. Wilson stated that Brown pinned him in his vehicle, prior to the fatal shooting, where he and Brown struggled over his gun. Following this struggle, Brown was shot six times. Immediately following the shooting, protests began, and Ferguson, at times, exploded into civil unrest. Racial tensions were brought to a boil following “Fergustan,” a title used to describe the city’s tensions and the resemblance it had to the Middle East with a strong military presence.

Events began Oct. 10 outside of St. Louis County Prosecuting Attorney Bob McCulloch’s office in Clayton, Missouri. Lesley McSpadden, Michael Brown’s mother, led a march from the location of the shooting on Canfield Drive to the Ferguson Police Station as participants of this march demanded justice for her son. Common chants heard during the marches included “I am Mike Brown,” “hands up, don’t shoot!” and “no justice, no peace.”

Apart from participating in these events, I went with the intention of giving my support and hoping to gain a better understanding of the struggles that face different racial groups within our country. Growing up in State College, Pennsylvania, a community that is 83 percent white and nicknamed the “Happy Valley,” I had never given race tensions much thought. It was this experience that opened my eyes to the racial issues that plague our wider community. An example of this is the very powerful hashtag #iftheygunnedmedown, which expresses the manner in which the media may portray minority groups after they have been harmed at the hands of law enforcement officials.

Organizers are drawing connections between many social justice struggles. Through the support of veterans, Tibetan monks and environmental groups all over the world, an impressive display of solidarity is manifesting. The people in these areas are accustomed to these incidents: the loss of a loved one to those that are supposed to be protecting us. Then after this loss, more pain is added when the justice system goes on to fail to bring justice.

The change needed is deep. A great start is improving race and community relations not only in Ferguson but nationally. The frustration that is being seen goes beyond the killing of Michael Brown, and it is very important to recognize this.

To me, it seems simple. We all have the right to a fair trial, and police officers should not be acting as judges.