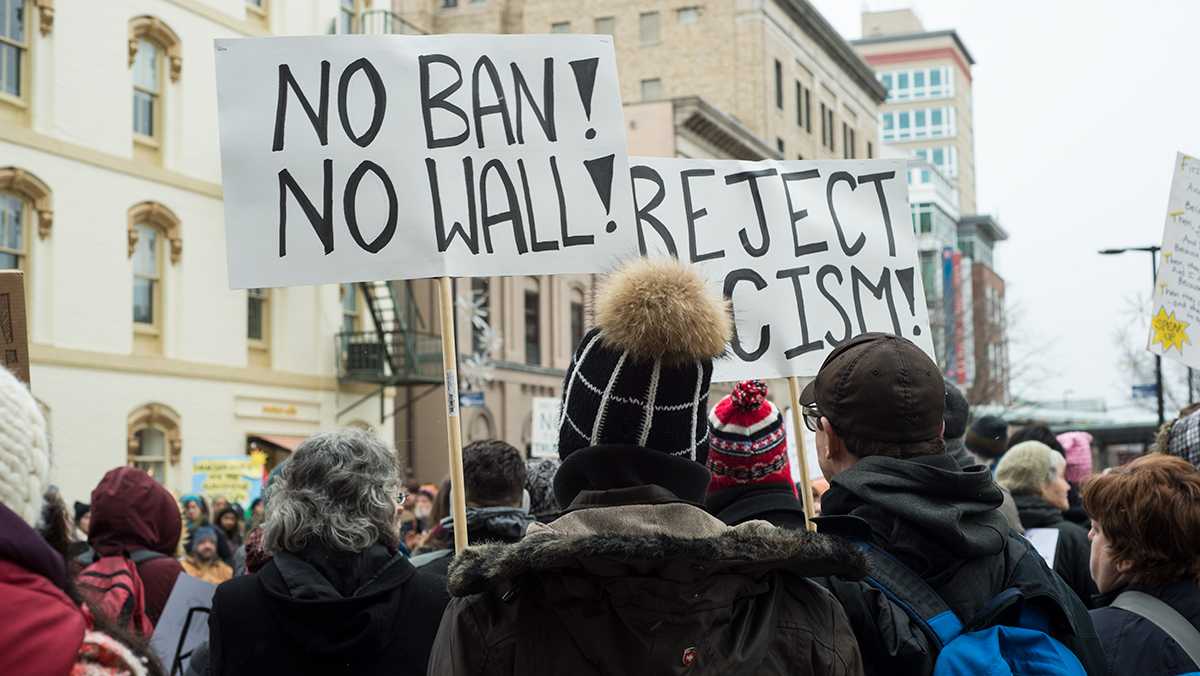 Fernando Ferraz/The Ithacan
A crowd gathers for a rally Jan. 28 on The Commons to protest President Donald Trump's recent Muslim ban, which restricts travelers and refugees from seven Muslim-majority countries from entering the U.S.
By Zack Ford
Published: February 7, 2017

It seems clear to me that President Tom Rochon has learned nothing about promoting inclusion during his lame duck year.

His statement to the campus community on Jan. 30 spoke to the students, faculty, and staff at IC who felt  “particularly vulnerable” and “fearful” because of President Trump’s recent executive order, but somehow managed not to use the words “Muslim” or “Islam,” even though that’s exactly who it targets.

Even The Ithacan shied away from calling the order a Muslim ban, but that’s what it is. A “Muslim ban” is exactly what Trump campaigned on, and it’s exactly what the order actually does: It targets Muslim-majority countries and bans people from those countries from entering ours — rather arbitrarily. I’m proud to write for a publication that isn’t pretending it’s anything else.

Yes, some non-Muslims are impacted, but Trump has promised that they will receive preferential treatment. And yes, not all Muslim-majority countries were targeted, but a ban on Muslims doesn’t have to ban all Muslims to still be a Muslim ban. This order is only one of many steps the administration is taking to foment Islamophobia and harness power from that fear and prejudice.

After everything IC has been through in recent years, the fact that Rochon still doesn’t know how to make a public statement that specifically acknowledges who is actually experiencing discrimination and stigma is a stark reminder that we never should have tolerated allowing him to stay an extra year in the first place. His so-called “unity statement” this summer suffered from the same problem, refusing to acknowledge the black victims of police brutality or the Latinx LGBTQ victims of the Orlando shooting. And his unwillingness to call IC a “sanctuary campus,” despite policies that generally protect undocumented students, further speaks to his cowardice as a leader.

When people feel targeted, powerless, and vulnerable, the last thing they need is to also be made to feel invisible. But that has been the legacy of Rochon’s administration: to diminish the input of campus constituencies at every turn. Whether it’s student leaders demanding their rightful seat at the table for campus decisions, students of color crying out to have their experiences of discrimination validated, part-time faculty fighting to be paid a fair wage, tenured faculty expecting a role in crafting massive curriculum and workload changes, or dutiful staff just clinging to their jobs in hopes they’re not next to be cut, Rochon has always managed to block them all out and still somehow convince the Board of Trustees he’s working on behalf of the college. I’m sorry, but IC is more than just a budget.

To those who think I’m overreacting, I would point out that on the same day he signed the order, Trump also issued a statement honoring International Holocaust Remembrance Day that intentionally did not mention Jewish people. This erasure has been universally criticized by Jewish groups across the political spectrum, and rightfully so. Surely, this is not the model for “inclusion” our college should be following.

The fact that other universities have issued similarly whitewashed statements ignoring their Muslim community members is no excuse. Ithaca College deserves a president who leads — one who doesn’t hide from those among us who most need their advocacy and support but instead champions their cause. Rochon has proven time and time again that he is not that president. I hope that the search committee and Board of Trustees selecting Rochon’s successor hold the final candidates to a higher standard than what we’ve had to tolerate for the past decade.

What Trump has done in just the first few weeks of his presidency has seriously thrown the fate of our democracy into question. Perhaps the IC community, at least, can live up to our alma mater’s promise of being a shining beacon for all who dare to live their dreams.

Zack Ford ‘07 is the LGBT Editor at ThinkProgress.org and a former Student Government Association president.