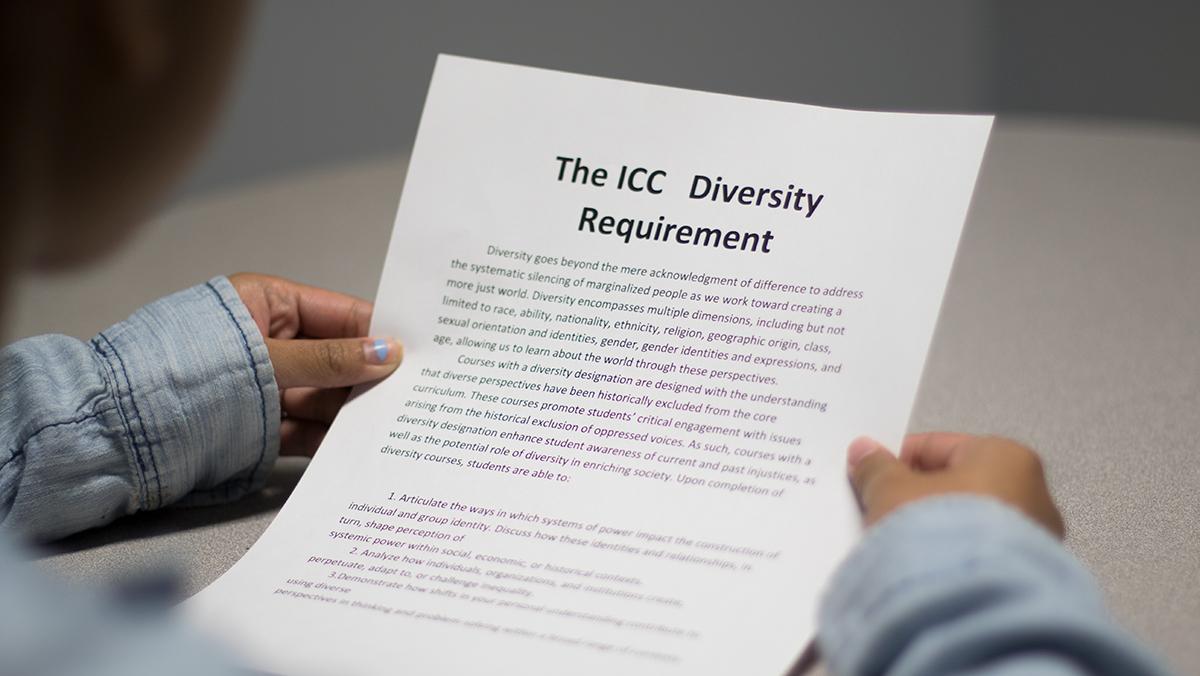 Connor Lange/The Ithacan
The diversity course is one of the requirements of the college's Integrated Core Curriculum, which was implemented as part of the strategic vision of the IC 20/20.
By Cal Goodin, Clare Nowalk, Rose Munsey-Kano, Zoë Green
Published: April 26, 2017

Editor’s Note: The following commentary is part of a package that addresses the diversity requirement of the Integrated Core Curriculum. The students who wrote these commentaries are part of a course called Intergroup Dialogues, which is taught by Derek Adams, assistant professor in the Department of English, and Sarah Grunberg, instructor in the Department of Sociology. The other commentary can be found here.

Diversity is a headline, shadowy statistic, and source of contention at Ithaca College. This word is used simultaneously to attract prospective students and as an attempt to appease current students. Then there is the ICC: a beast that rears its head in campus news often, as well as being bandied about as a sarcastic joke by most. Being the intersection of these two heated topics, the diversity credit is just as controversial as you might assume, but conversations about its reformation are nebulous at best. In the following letter, we address issues with the current ICC diversity credit and outline our suggestions for its revitalization, which would increase the focus on dialogue between students about their personal identity intersections.

We believe that the college’s official statement regarding the ICC Diversity Requirement, which includes objectives every student should be able to achieve upon completing their diversity course, are excellent standards for what this credit should accomplish. We do not believe that the current credit meets these goals, however, and after conducting a survey of 58 students, we found that others felt the same. The college states that students should be able to “discuss how these identities and relationships, in turn, shape perception of systemic power within social, economic, or historical contexts.” But when asked: “How prepared do you think Ithaca College students are to have conversations about diversity in a setting outside of the classroom?”, ranking preparedness on a scale of 1-5 (1 being “not at all prepared” and 5 being “very prepared”), 43.1% of respondents marked 3, indicating they felt IC students are only somewhat prepared to have conversations about diversity outside of the classroom. 34.7% of respondents marked either a 2 or 1. Only 8.6% marked 5. This means that overall, 77.8% of respondents felt that IC students barely meet the minimum of this objective.

Even though most respondents felt cynical about the current state of the credit, 82.8% of students at Ithaca College believe that we should continue to require a diversity class. 86.2%, however, believe that it should be updated. When reviewing students’ thoughts on why Ithaca has a diversity credit, it becomes clear that the school’s mission and the students’ experience of its implementation are at odds. While some student responses followed the college’s main focus of the diversity credit, “understanding that diverse perspectives have been historically excluded from the core curriculum,” others interrogated the dubious elements of the requirement. There were multiple responses that were similar to: “I think IC does it to make themselves look good, not to help students.” This belief that the diversity credit is merely for show makes it difficult for students to take the requirement seriously.

In order to amend the aforementioned qualms with the current diversity requirement, we propose the following steps. First, we recommend that there be a focus placed on how to have a conversation about diversity. There is often a fundamental misunderstanding for students that diversity only has to do with those who are marginalized. In order to combat this assumption, the diversity credit needs to balance the examination of oppression with that of privilege. Students need to examine every piece of their identity, not only the ways they are oppressed, through the lens of intersectionality. Part of this process of introspection is being able to voice biases, internalized oppressions, fears, feelings, and questions.

With the diversity credit as it stands, courses are held to incredibly vague standards, which, when implemented, may or may not cover the intellectual bases necessary for the credit. Additionally, a course can cover only one form of oppression and still be considered a diversity course. This contradicts the very term diversity, which includes race, sexuality, gender, ability, age, ethnicity, religion, socioeconomic status, family structure, and more. We have compiled a list of possible sources for the revitalized credit that cover these topics to send to the administration, written both by authors of privileged and marginalized experiences. An intersectional study of these topics, through the lens of each students’ life experiences, should be integral to a diversity credit course.

This leads us our next recommendation: the addition of a fourth credit hour for the diversity requirement. Currently, every school at Ithaca College requires one three-credit diversity course. The diversity credit was added to the college, as a part of the ICC, as a tacked-on attribute. None of the classes that have the diversity attribute were specifically constructed to be diversity classes, because the belief behind the credit was that already existing classes could easily adapt to be considered diverse. This, however, is not the case and makes it difficult for professors to cover everything that should be covered in a diversity-labelled course, and therefore difficult for students to have the conversations and levels of engagement with these subjects that the college proclaims to desire.

It would be extremely difficult to add an entire, newly constructed diversity credit course for many reasons, including but not limited to the fact that many programs have a strict curriculum that already has little room for the ICC courses. A fourth, noon-hour session for these classes (styled like First-Year Seminars) would allow the space for the consumption of important materials specifically about diversity and the opportunity to engage in difficult dialogues without overwhelming the professor’s desires for course-specific information, and without needing to add a full second diversity designated course to the ICC requirement. This hour would be devoted entirely to students grappling specifically with questions of oppression and privilege, all through a personal and political lens, learning from one another’s experiences and thoughts.

What we are proposing is not an erasure of the current system, but a development to benefit all students. Introspection and dialogue are a necessary part of forming an understanding of one’s own identity. Our survey results show that there is a desire for change, and especially given the current political climate, we believe it is necessary for students to have these discussions and to think more deeply about diversity. Our proposal for an additional fourth-credit hour would aid both professors and students in their ability to cover foundational texts and topics and aid the administration and the ICC as a whole in bringing the credit closer to realizing their initial goals.