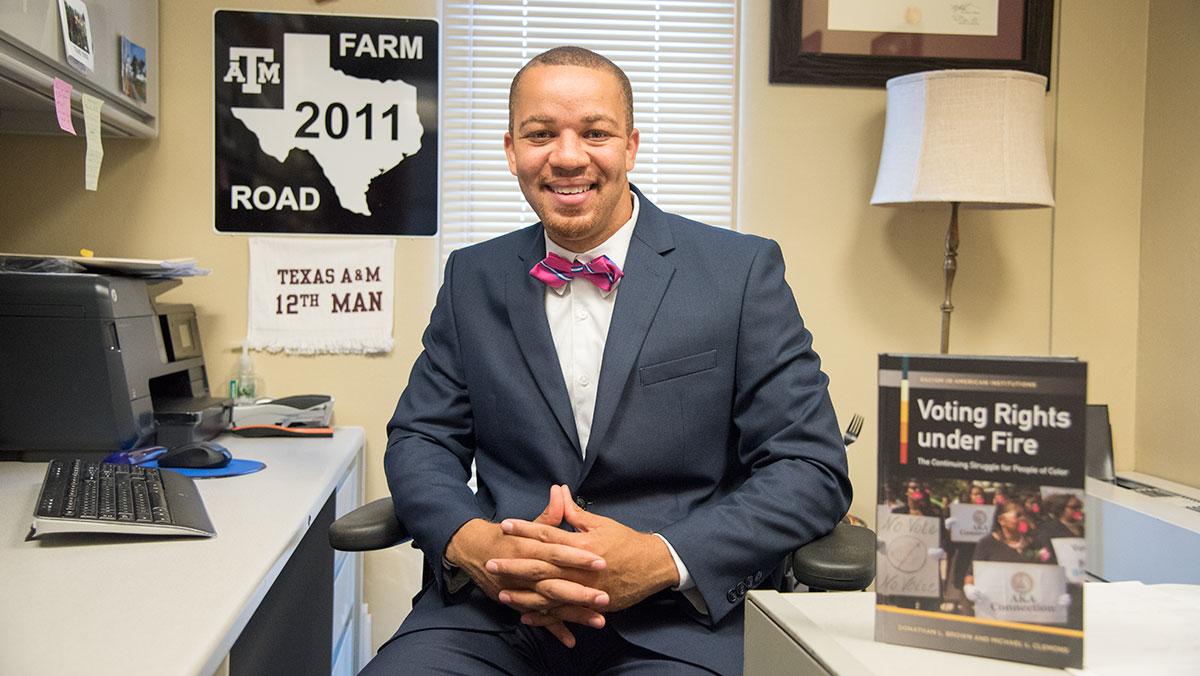 Jennifer Williams/The Ithacan
Donathan Brown, assistant professor in the Department of Communication Studies, recently co-authored a book entitled "Voting Rights under Fire: The Continuing Struggle for People of Color," in which he discusses the many debates surrounding the right to vote.
By Donathan Brown
Published: September 1, 2015

Claims over the widespread existence and influence of in-person voter fraud continue to fuel much debate throughout the country, causing shifts in both the political and legal undercurrents. Grand Old Party lawmakers in states like Colorado, Florida, Arizona, Iowa, Nevada and Texas, among others, claim in-person voter fraud is alive and well and have gone to great mediated lengths to saturate the headlines with this dubious message. Intrigued by the timing of these laws, especially against the grander backdrop and growth of majority-minority cities, I, along with co-author and political scientist Michael Clemons, were in agreement that there is more here than meets the eye. To further solidify our thoughts, once the video footage of Pennsylvania Republican Rep. Mike Turzai was released, showing him say, “voter ID, which is going to allow Gov. Romney to win the state of Pennsylvania, done,” we knew we had to act.

With 32 states now requiring some form of voter identification, our book, “Voting Rights under Fire: The Continual Struggle for People of Color,” articulates the curiosity and ultimately the findings of multiple legal and political inquiries that sought to go beyond the press releases, the television interviews and the campaign speeches. Chief among the goals of this book is to highlight not only the past and present underpinning racial dimensions involved throughout the political legacy of voting rights, but more importantly, to illustrate how such past actions continue to guide current controversies pertaining to African-American and Latino voting rights in a retrogressive manner.

As the once “solid south” finds itself on the verge of becoming purple, political dynasties now find their influence in danger. We were quite surprised, upon reviewing court documents, to discover the flimsy nature of evidence that some courts allowed and accepted as fact. In one case, Applewhite v. the Commonwealth of Pennsylvania, a lower court judge noted the “alarm, concern and anxiety” expressed by one state government official, and as a result — and without actual evidence to rejoin the plaintiff’s claim of retrogression — sided with the defendant. Another example is, of course, the infinitesimal statistical findings of actual in-person voter fraud. Of the 197 million votes cast for federal candidates between 2002 and 2005, only 40 voters were indicted for voter fraud, according to a Department of Justice study outlined during a 2006 Congressional hearing. Only 26 of those cases, or about 0.00000013 percent of the votes cast, resulted in convictions or guilty pleas. In a 2013 report of Colorado’s 3.5 million votes cast during the 2012 election, fraud findings equated to far less than 0.001 percent of Colorado voters. In a 2015 interview on ABC’s “This Week,” New Jersey Democratic Sen. Cory Booker, in reference to in-person voter fraud in Texas, argued that lightning strikes are more common in the Lone Star state than actual in-person voter fraud. When taken to task over the comment, the 10-time Pulitzer Prize–winning newspaper and fact-checking extraordinaire, the Tampa Bay Times, rated this comment “true.” The determined calculation in Texas turned out to be four cases of fraud for the 72 million votes cast since 2002, equating to a 1 in 18 million chance of fraud.

Following exhaustive legal research, obtaining and analyzing state level data sets, reviewing past Congressional hearings, records and court decisions, along with current political trends and debates, we are extremely confident saying widespread voter fraud is a myth and indeed retrogressive. The simple truth is that enacting harsh voter identification laws for the sake of “securing” the ballot box remains to be a solution to a nonexistent problem.

Donathan Brown is an assistant professor and communication major coordinator in the Department of Communication Studies. Email him at dlbrown@ithaca.edu.