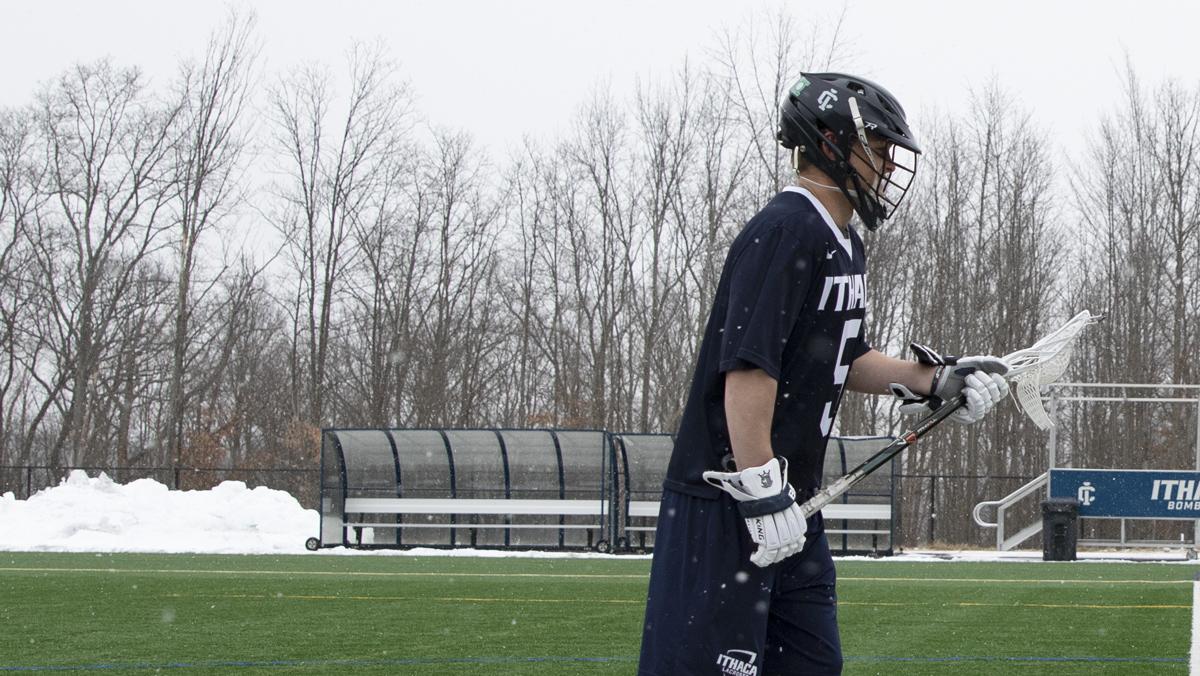 After its inaugural season in the Liberty League and having advanced to the second round of the conference playoffs last season, the men’s lacrosse team is poised to make another run toward postseason.

The Bombers have strong leadership across the offense and defense, but a handful of holes left by graduated seniors leave some questions about the strength of their starting lineup. On offense, the Blue and Gold graduated attackman Jake Cotton ’18, who ended his college career with 102 goals and 233 points, making him the player with the third most points in the men’s lacrosse program overall. Senior captain Sean Seaberg said that although Cotton’s shoes will be hard to fill, there is plenty of competition for the spot.

“We have [sophomore] Kyle Johnson, [junior] Dan Lee and [senior] Owen Smith,” Seaberg said. “Kyle is coming off a torn ACL last year and has had a great year so far. Owen is coming off an injury as well and has just returned back to practice. Despite the recent change from midfield to attack, he has looked very good in practice. Dan played a smaller role last year but came up big for us when called upon. I’d expect a lot more of him this season.”

In the midfield, the South Hill squad retained its three starters, however, the second string suffered heavily after graduation and will likely see some new faces.

Midfielder Dillon Fitzpatrick saw the most action last season of the bunch, notching nine goals and two assists, as well as seven ground balls in the 16 games he appeared in last season. Midfielder Connor Till saw time in 13 games last season, picking up 14 ground balls, in addition to taking a small portion of face-offs for the South Hill squad. Fellow midfielders Matt Montgomery and Kevin Enos played in 14 games and nine games respectively, collecting nine ground balls between them. With another year under their belts since coming in as freshmen, both Till and Fitzpatrick should be more comfortable in the Bombers’ offense, while Montgomery and Enos can use their experience and knowledge to their advantage on the field.

On the defensive end, the Bombers finished 2018 as one of the best units on paper in Division III. The team racked up 268 caused turnovers, making it third best in the country, and collected 762 ground balls, ranking them at eighth in the nation. However, the Blue and Gold lost close-defenders Winston Wenham ‘18 and Keith Morrissey ‘18 and will need to find replacements.

“Jake Hall-Goldman will definitely step up to fill in the big shoes left by Winston and Keith,” junior captain Aaron McCartney said. “He’s one of the hardest working players I’ve ever played with, and he’s more than ready for his new role.”

Senior midfielder Brendan King said the defense is striving to come together this year to be even better.

“Communication has been a huge emphasis this year,” he said. “Continuing from last year is a huge part of what we are striving for — taking the positives from last year and just working on the little things like communication, being in the right position to defend and taking away top side.”

Junior goaltender Robby Atwood will be on the other end of all shots that get past the defense. Atwood enjoyed a stellar 2018 campaign as a sophomore, stopping 52 percent of shots and allowing 8.51 goals per game.

King will man the midfield line along with senior teammates Josh Della Puca and Conner Crosson, making a trio that will be able to dominate opposing defenses. However, King said he believes the talent spans across the board.

“This offense will be lethal this year,” he said. “We are really putting together the pieces each day at practice, and it has really been coming together. The new shot clock will play into our favor on defense and especially offense. We are a run-and-gun team, and we like to attack the cage as quickly as possible. Therefore, our scoring numbers should be very high this year, especially with the scoring power that we have in some of our players.”

One of the weaknesses of the Bombers’ offense last season was their man-up efficiency. They scored only 10 goals on 42 opportunities. Man-up possessions are a crucial opportunity for the offense to capitalize because a defensive player will be missing due to a penalty. King said that this year the Bombers are focusing on keeping their plays simpler.

“We have looked to limit our turnovers when man-up,” he said. “Last year, we took a lot of risks in order to score points on man-up, and clearly that didn’t work out well. This year, we plan to keep it simple and let the ball do the work.”

In order to score at all, the South Hill squad will need the ball first, and the Bombers’ face-off man Steven Landspurg ’18 graduated in May leaving a big question mark at the face-off X.

According to head coach Jeff Long, freshman Cameron MacNicol and transfer sophomore Matt Pagliaro will attempt earn some extra possessions for the Blue and Gold as they traverse the talented Liberty League conference and embark on a tough road schedule that features Rochester Institute of Technology, Cabrini College, Union College and others.

With some adjustments to the lineups but still lots of experience on board, the Blue and Gold are looking forward to what could be a promising season. The Bombers open the season at 3:30 p.m. Feb. 27 at Higgins Stadium, where they’ll host the Lycoming Warriors in a nonleague matchup.