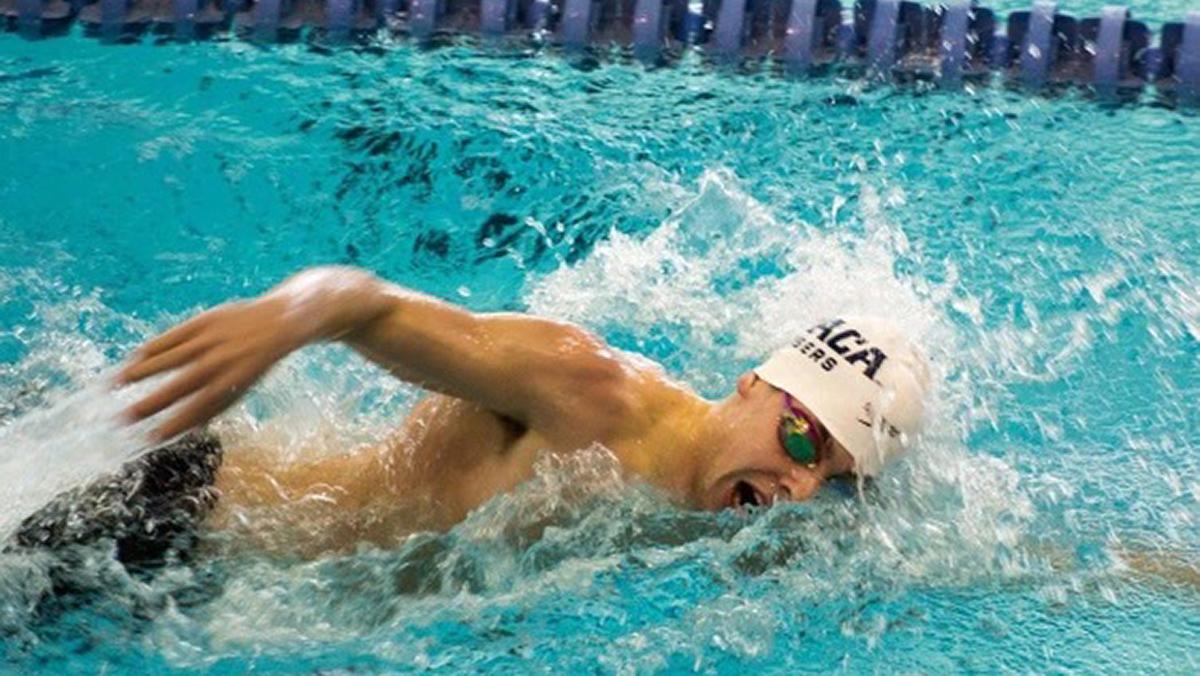 When former Ithaca College swimmer Lucas Radouch ’19 dove off of the back of a boat in July, he had no idea how much his life would change in just a few short seconds. Misjudging the depth of the water, Radouch dove in and hit his head on the ocean floor, breaking his C5 and C6 vertebrae in his lower neck.

Radouch started swimming competitively when he was seven. He said he met some of his best friends through swimming, including Harrison Cannon, who he met before college. Cannon helped organize a GoFundMe for Radouch after the accident.

Radouch said that competing was not the only thing he enjoyed about the sport, as he also loved the friendships he made throughout his short time as a Bomber.

“I only swam my freshman year, but I still talk with a bunch of people from the team, like my roommates and the captains that I had,” Radouch said. “That’s kind of the reason I joined the team to begin with. It wasn’t really so much for the swimming aspect of it. It was more for the community and having that instant friendship, and it’s nice to see that even though we don’t swim anymore now, we can still stay in contact.”

Radouch said that having supportive friends has been an important part of his recovery. Hannah Byron ’19, Radouch’s ex-girlfriend, said the love from his friends and family has left her speechless. Since July 2020, the fundraiser has earned over $44,000. The funds will aid in his recovery and make his house more wheelchair accessible.

“It’s difficult to put into words, especially when you’re going through something like this, to feel that love and to feel that support, it means the world to him,” Byron said.

Aaron Levin ’19 is another friend who has been helping Radouch through this period. Levin and Radouch met when they were freshmen on the swim team, and Levin said they have only gotten closer over the years.

“He went from being my teammate to being my roommate,” Levin said. “[Since the injury], me and my other friend … who was our roommate have been checking in on him. We’ve been trying to reach out to him and make sure he’s good. If he needs anything, he knows he can talk to us.”

Radouch said the other thing helping him get through this process is his sense of humor. He said he was still able to laugh about the irony of the situation.

“I was pushed towards swimming by my parents when I was younger because it was a safer sport,” Radouch said. “The irony of all that now, … I think they would have preferred a couple of concussions rather than the broken neck.”

Levin also said Radouch’s positivity and humor have been helping him get through a rough few months.

“Lucas is doing as good as someone can with the life change that occurred,” Levin said. “He’s an optimistic kid; he tries to make people laugh. He’s trying to make the best of a really horrible situation.”

Radouch said he does not want his injury to change his personality.

“When I break my neck and can’t move anymore, I’m still rooted in my ways,” Radouch said. “It didn’t make me feel different. Obviously I can’t do the things that I could do before, but I still think the same way. I’m still a goofy person, always making jokes.”

There is a long road ahead for Radouch, but he said he is ready to see where his recovery takes him. With an injury like this, Radouch said it is hard for doctors to determine what the end result will be. His injury is still young, as it occured in July.

Throughout his recovery, Radouch said he has managed to stay positive, even if he is unsure of what is to come.

“It’s important to always note that with these kinds of things, no matter how someone comes in or out, there’s a whole bunch of people involved,” Radouch said. “The person is never alone in these kinds of situations.”

Byron said Radouch hopes to become an inspiration and a mentor to other people with severe spinal cord injuries.

“[Becoming a mentor] is something that he already knows that he wants to do, and that just speaks to who he is as a person,” Byron said. “You don’t see many young people in wheelchairs, so it can be really isolating at times, so I think he wants to help people feel connected in that community.”

As difficult as the past few months have been for Radouch, he said his positive outlook helps him push through hard times. He is already thinking forward, wanting to be able to give back to the people who have helped him throughout his recovery process so far.

“Hopefully I’ll be able to give back to IC,” Radouch said. “The relationships I formed there are the guys I talk to every day: my friends, my roommates, fellow swimmers and fellow musicians.”