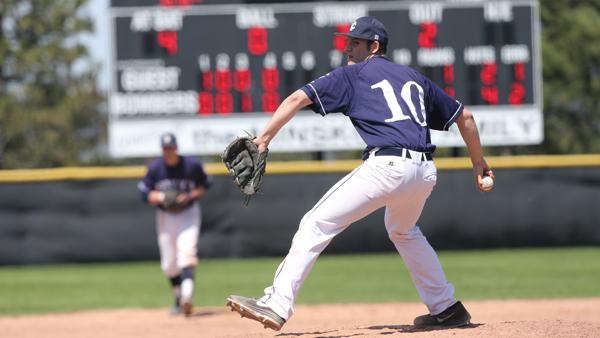 With Empire 8 play behind them, the baseball team now has its sights set on the NCAA playoffs. But before the team can make a run for a national championship, it must finish the regular season with a crucial stretch of non-conference games.

The Bombers have already won six of the final nine non-conference games, including a doubleheader sweep against the SUNYAC conference runner-up SUNY-New Paltz last weekend and a huge 14-2 blowout of No. 6 SUNY-Cortland on Monday.

The Bombers final nine games — seven of which are at home — are important, because they allow the team to maintain the momentum that they established by winning the Empire 8 Championship. Junior center fielder Luke Stark said the games also condition the team for the NCAA tournament.

“They’re really helping us prepare,” Stark said. “We want to go into the playoffs on top, and these games will give us some momentum going into regionals.”

Last year, heading into the regional round of playoffs, the Blue and Gold had just one game in the 10 days leading up to the tournament. In regionals last year, the Bombers bowed out quickly with two losses to Farmingdale State.

This season, the Bombers had six games in the final week of April and another game on May 1. After a break for finals, the team plays two games against Montclair State just two days before the regional tournament begins.

“Playing these games are way better than not playing,” Locastro said. “These games get us ready and keep us where we are. We’ve been playing so well lately, and these games help us to maintain that.”

The Bombers started off the nine-game stretch by beating SUNY-Oneonta and SUNY-Oswego on consecutive days. Oswego placed 3rd in the SUNYAC conference and has proven itself by beating No. 6 SUNY-Cortland.

The Blue and Gold continued to tear through the SUNYAC conference with two victories over SUNY-New Paltz. Ithaca’s Assistant Coach Frank Fazio said the games against the state schools pose a good challenge for the Bombers, which in turn makes them a better team.

Valesente said the biggest matchup for the Blue and Gold in this stretch was SUNY-Cortland.

“They’ve had our number over the years,” Valesente said. “They’re very good. They have some good players, and they’re always tough to beat.”

The Bombers, who beat the Red Dragons earlier in the year 9-5, played against Cortland again on Monday. The Blue and Gold routed the No. 6 ranked team 14-2 behind four hits from Locastro and a grand slam from senior Corey Caswell.

The Bombers may see Cortland again in the regional round of playoffs. Cortland is currently ranked No. 2 in the region behind Ithaca, and senior pitcher Pat Lemmo said defeating the Red Dragons twice shows that Cortland is beatable.

“It gives a lot of confidence to [our team],” Lemmo said. “It’s not a one-time fluke. We went out there and had an amazing hitting performance, which got things going and shut them down.”

Sophomore catcher Matt Connolly said the non-conference games are about experiencing repetitions, which often cannot be simulated in practice.

“We [are using these games] to fine-tune our mechanics,” Connolly said. “The aspect of playing every day makes us better. We’re getting at bats, getting grounders and pop-ups. It’s just a lot of exposure for us.”

Stark said the team is not using the games to alter their strategy. Rather, they are working on getting better at what they’ve been doing all season. Thus far, the team has emphasized a small-ball offensive style as well as stellar defensive play to achieve success.

“We’re not really changing much,” Stark said. “We’re just playing our game and working on putting teams away, which is what we want to be doing. We just can’t let up.”