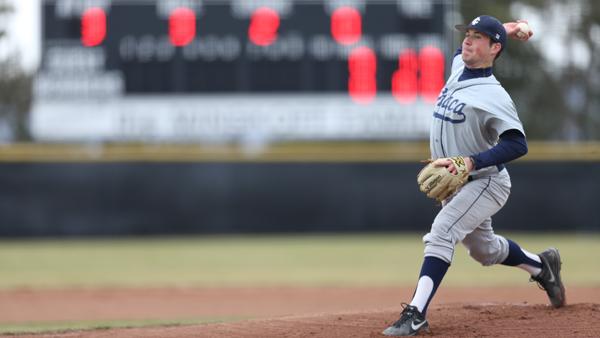 Durst Breneiser/The Ithacan
Senior pitcher Pat Lemmo pitches against SUNY-Oswego on March 29 at Freeman Field. The Blue and Gold swept a doubleheader over the Lakers, and Lemmo is currently 4–0 on the season.
By Kristen Gowdy — Staff Writer
Published: April 10, 2013

Riding a 14-game win streak, the baseball team is on the hunt for its second consecutive NCAA berth. As it enter the thick of Empire 8 play, the team currently sits atop the conference standings with a perfect 4–0 record. But to go beyond a league championship and make a run into the NCAA playoffs, the Bombers need to maintain the focus and intensity that has led to their success this season.

Head Coach George Valesente said last season’s disappointing end has fueled the Bombers’ goal of winning a national championship. The Blue and Gold bowed out in the regional round of the NCAA tournament last year.

“We failed miserably last year in the regionals,” Valesente said. “We underachieved, and we know it. The motivation is to correct that this year.”

Thus far, the team has relied on chemistry and timely execution to compile its 18–4 overall record. Valesente said the team’s “never say die” mindset is the reason for its achievements on the field.

“We seem to have a strong resolve as a team,” Valesente said. “The players don’t get upset or panic when we are down, they just work really hard to come back and try to do what they have to do to be successful.”

But mental strength is only a piece of the Blue and Gold’s equation for success. Each player on the team has stepped up when called upon. Valesente said the combination of pitching, hitting and defense at the right time has allowed the Bombers to become a solid all-around team.

This timeliness has proven to be successful for the Bombers, who were recently ranked 28th nationally by Collegiate Baseball. The Blue and Gold also rank nationally in several categories, including 18th in batting average and 16th in slugging percentage.

Senior Pat Lemmo said the ultimate goal for the Bombers is to remain focused on winning a national championship. With 20 games remaining, including most of Empire 8 play, the team needs to keep its intensity at a high level.

The Bombers, who swept Stevens Institute of Technology in a four-game series last weekend, are entering arguably the most important part of their season. The upcoming seven-game road trip could very well determine whether the team reaches the NCAA tournament.

“We’ve got a few more big weekends, and that’s pretty much what the season comes down to,” Lemmo said. “We don’t get an automatic bid into the tournament just based off of winning conference, so we have to win all of the games that we can.”

Unlike most other Ithaca College squads, the baseball team does not qualify for NCAAs by purely winning the Empire 8 tournament. Instead, the team must have wins against non-Empire 8 regional opponents earn a berth as an independent team.

Out of their 20 remaining games, all but three are considered regional games. To close out their season, the Bombers face opponents with a combined 117–73 record, highlighted by two games against top-ranked SUNY-Cortland. D3baseball.com currently ranks the Red Dragons No. 1 nationally, and two victories against them would prove valuable for the Bombers when it comes time to form the NCAA bracket.

“We just need to stay within ourselves and play our game,” Turner said. “We can’t let the other team psyche us out. If we do that, then we should be fine.”

Valesente said though the team understands what it needs to accomplish to win a national championship, he constantly reminds the players to enjoy each and every moment. He said that in order to be proud of its achievements at the end of the season, the team cannot look too far into the future.

“Every game, every inning, every pitch is important, so we need to focus on staying in the moment,” Valesente said. “If you can win a national championship, that’s exciting, but getting there was the most enjoyable part of it. Most of the time, what you fail to realize is that the journey is much more enjoyable than the outcome.”