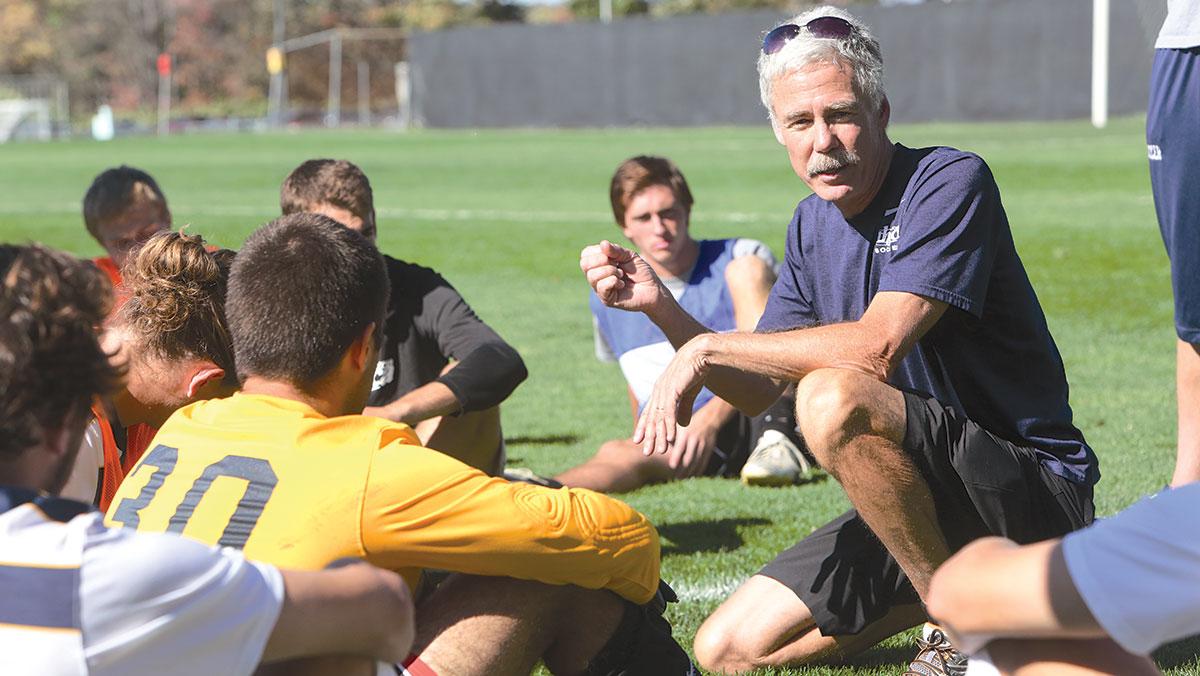 For 31 years,  head men’s soccer coach Andy Byrne has walked through the doors of Hill Center in the late afternoons and up to the white-lined grass of Carp Wood Field. He has set up countless cones and organized vast amounts of conditioning drills designed to evaluate each player’s skill set in preparation for the start of each season. Like many other coaches at the college, Byrne maintained long-term success in his lengthy tenure compiling a 301–174–58 record, but the 2014 season was his last, as he announced his retirement from the college Feb. 17.

Byrne, however, is not the only coach who has been a staple in their respective Bomber program. The 19 current varsity coaches who have been here for more than 10 years have amassed a total of 5,753 wins and have coached 396 All-Americans over the course of the years they have been here.

The coaches’ legacies of success and longevity is undeniable as 14 current head coaches own the winningest records in Bomber program history for their respective sport.

It’s nearly impossible to compare average coaching tenures for every program in every school in the country, but the college seems to have retained more of its head coaches than most.

For example, SUNY Cortland — a comparable Division III school — only has two coaches who have been in the same position for more than 20 years, while the Bombers have 12. The Red Dragons also hired two new coaches in September 2014.

In addition, Alfred University has hired seven new coaches in the past year and only one coach has been with the Saxons for more than 10 years.

Despite these impressive statistics, Susan Bassett, director of intercollegiate athletics and recreational sports, said she expects the best of her coaches regardless of their past success.

Being the best, however, has presented new challenges for the coaches as athletes, facilities and recruiting have all changed over time. Through the years, the course of coaches’ days have seen significant undertakings. Women’s swimming and diving coach Paula Miller, who was hired in 1984, said there has been an increase in the amount of paperwork to be drawn up, recruiting calls to make and copious meetings to attend. In addition, the increased cost of the college and the renovated facilities have also contributed to the myriad changes the coaches have experienced.

Comparing the college’s athletics programs to when he began his coaching tenure in 1983, Byrne said Division III recruiting has recently become more competitive and skilled due to the increased pressure of Division I and II schools.

“The biggest difference is the amount of time you have to put into recruiting,” he said. “The recruiting element is so time consuming.”

Baseball head coach George Valesente, who is the longest-tenured of any of the college’s coaches — he is starting his 37th season this spring — said the range of recruiting student-athletes has become much broader than it was when he started coaching the team in 1979.

“It’s gotten a lot more challenging,” he said. “In the old days, I used to get a letter or a phone call. Now I get numerous contacts a day from student-athletes from California, to Florida, to North Dakota, to Texas interested in Ithaca College.”

Similarly, Miller said the day-to-day demands were fewer when she began coaching in 1984, but now she has additional duties that have been piled on over the years, such as raising funds to allow her student-athletes to afford to pay for their extraneous expenses.

Given the increased cost of tuition, financing educational scholarships has become the objective for Division III schools, which were established in 1973 to foster a strong relationship between athletics and academics and to involve more student-athletes in collegiate sports.

Besides the cost of the college, the school also went through a physical restructuring phase over the years.

The one change many coaches pointed out is the fact that the facilities have changed significantly over the past 30 years. For example, the swimming and diving teams used to swim in Hill Center. Miller said the air quality was low, the noise level was high and it was a cramped, six-lane pool.

The newly built Athletics and Events Aquatics Pavilion, which opened in Fall 2011, features an eight-lane, Olympic-sized pool. Miller said they are still learning how to use the new pool, but it has significantly improved the quality of training for her athletes.

Many of the coaches have witnessed this restructuring phase. Eight coaches have their roots deep within the college, as they all attended the college as students before their coaching tenures began.

Valesente, one of the eight coaches to attend the college as a student, said he has never applied for another job, and that he is happy he was able to see his family grow over the years.

“I’m here, and I have an ideal kind of job,” Valesente said. “It’s not as demanding as Division I, but we are still able to be successful and get good athletes. I can spend time with my family, and I have a life.”

On the other hand, six coaches attended rival SUNY Cortland as students themselves, including volleyball head coach Janet Donovan, who started as head coach in 1992.

Although once a rival of the Bombers, Donovan said she came to the college originally for what the school represented with its balance between academics and athletics.

Softball head coach Deb Pallozzi, who is beginning her 27th season as head coach, said she and the other coaches share a common goal.

“You can win here,” she said. “They allow you to sustain the level of success that I want to compete at. You get the support. I have the opportunity to compete at the highest level, which is for a national championship.”

Bassett said teaching should be the primary emphasis for the coaches and the colleges, and their longevity has made a massive impact on the success of the athletics department and the college.

“They are educators first and foremost,” she said. “Their ability to evolve over time to respond to new challenges is evidenced in their sustained success. It takes time to build a recruiting network. They know how to achieve excellence on and off the field.”

Football head coach Mike Welch, who is in his 21st season as head coach, said reaching the top of the Division III coaching carousel is never an easy task, and staying on top for decades is almost inconceivable.

“It’s called commitment,” Welch said. “Successful athletics at Division III are going to give a leg up for your school [as a whole]. We’ve had a high level of success on the field doing it the right way.”

Donovan said the reason she stayed at the college was due to her favorite part of the job: She gets to work with the athletes and interact with the administration on a daily basis.

“I thought there would be only one place that I would think about taking a job [as a head coach] if it wasn’t Division I, it would be Ithaca College,” she said. “More things kept me here. I’m getting student-athletes that are serious, and they love competing.”

Though life moves quickly for the coaches, one thing has remained the same: They still have a team to lead. In a few cases, there are individuals who coach for multiple athletic teams at the college as well.

Men’s lacrosse head coach Jeff Long, who is also the goalkeeper coach for the women’s soccer team, said over the 28 seasons he’s been here, his coaching style has adjusted to the generation of student-athletes he is coaching.

Likewise, women’s basketball head coach Dan Raymond, who is in his 15th season with the Bombers, assists Pallozzi with the softball team, and said he often converses with her to learn more about in his coaching strategy.

“I love having conversations with coaches,” he said. “Every time I’m around coach Pallozzi, I’m learning something.”

In addition to Long and Raymond, for the first 20 years Byrne was the men’s soccer coach, he also helped coach the men’s and women’s track and field teams, but left that position given the increased workload in the last decade.

Byrne, who is the first of many coaches who will reach retirement age in the next decade or so, said he now shares a similar approach to coaching with many of his peers: The most satisfying part of the job is the interaction he has with his athletes.

“The hardest thing is having to make cuts,” he said. “Those kind of decisions are the ones I look back on and I probably could have done differently. The thing I find very rewarding is the relationship with the players, especially after they leave. Staying in touch with them and having them come back making their way through life is pretty cool.”