Blue and Gold eliminated from playoff contention with loss to Fisher 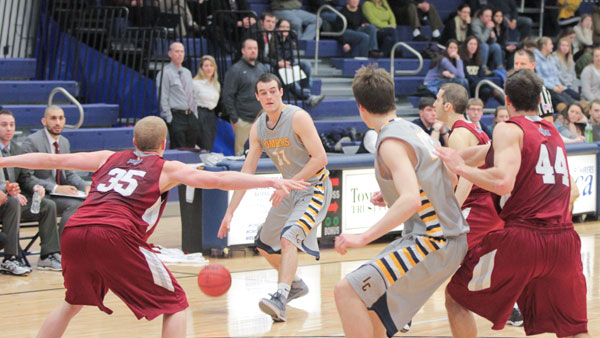 The men’s basketball team once again ran out of energy in the second half, letting the St. John Fisher Cardinals defeat the Bombers 81–71 Feb. 8 in Ben Light Gymnasium.

The South Hill squad threatened the Cardinal’s scoring lead multiple times throughout the game, including a late push that left the Bombers only trailing by one point at halftime.

Junior guard Max Masucci carried the Bombers in the first half, scoring 15 points with four 3-pointers. He finished with a team and career-best 20 points. He said he was feeling a rhythm early on in the game.

“I was just shooting [the ball] with confidence,” Masucci said. “My other teammates have confidence in me, so I was just letting it fly.”

Freshman Keegan Ryan answered in the first half for Fisher with 11 points. The Cardinals extended the lead to 10 points early in the second half, but the Bombers came roaring back.

Sophomore Brad Johanson knocked down three 3-pointers in two minutes, bringing the Bombers ahead 57–56. A steal and layup by sophomore guard Sam Bevan gave the Bombers a three-point lead.

The Cardinals began to take control in the final 10 minutes of the game. Sophomore guard Chaz Lott took complete control on the offensive end with a game- and career-high of 29 points for Fisher.

Bomber’s head coach Jim Mullins said his team’s turnovers made the difference in the final minutes of the game.

“We stopped taking care of the ball,” he said. “Basically, for most of the year, it’s been a tale of two completely different halves.”

Senior Frank Mitchell, who averages about 17 points per game, was held to just six points.

Senior Chris Jordan and sophomore Joey Ross were both out because of injuries. Jordan reinjured his left leg in a game against Nazareth College on Feb. 7, and Ross suffered a thigh injury during practice last week.

Ross said the team did not challenge the Cardinals for the entire game.

“We just got to put together 40 minutes instead of 20–25 minutes,” he said. “The best thing to do now is to try and close out the year with three wins,” Ross said.

The Bombers are officially out of playoff contention but have three games remaining in the regular season. Their next game is against Elmira College at 6 p.m. Feb. 14 in Ben Light Gymnasium.

Contributing Writer Jake Siegel contributed to the reporting of this article.